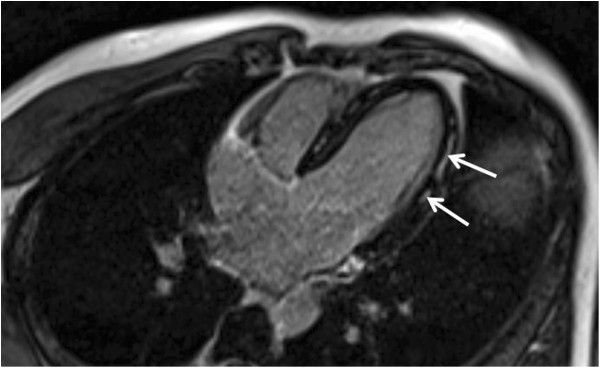 Myocarditis
Myocarditis is an inflammatory disease of the myocardium, which may occur alone or in association with a systemic process. There are numerous etiologies of myocarditis, but all lead to inflammation and myocyte injury, most often leading to signs and symptoms of heart failure. The course of myocarditis may vary based on the etiology and timeline of symptom progression. The diagnosis is supported by clinical findings, laboratory evaluation, and cardiac imaging. A definitive diagnosis by endomyocardial biopsy is rarely required. Management is supportive and aimed at addressing complications.
read more
Load more
Share
Ask Questions
Take Notes
Download Slides
Report Mistake
Comments
show all Show less
My Notes
show all Show less
Learning Material 2
show all Show less
Report mistake
Transcript
0 of 0

00:00 What does it look like? This is a good example of a lymphocytic myocarditis. This is actually a fairly aggressive lymphocytic myocarditis. All the pink cells down there are going to be myocytes. All of the blue cells, all the blue nuclei are going to be, for the most part, T-cells and monocyte macrophage lineage. And they are causing a lot of dysfunction. There is some increased edema. Another end of the spectrum. So myocarditis, lymphocytic myocarditis can be from very focal disease to very aggressive disease. 00:32 On the aggressive end of the spectrum is so-called giant cell myocarditis where you get such extensive damage and such extensive production of mediators such as interferon gamma that you get macrophage fusion. When the macrophages fuse, they form multinucleated giant cells that we can recognize on biopsy or on autopsy. So this is just one end of the spectrum of the lymphocytic myocarditis. And then you can have immune checkpoint myocarditis. Increasingly, we give antibodies that block the cellular ligands that are important in regulating immune responses. So antibodies against CTLA-4, antibodies against the program death ligand, PD-L1. So we have a variety of antibodies and when we set the immune system loose to attack tumors, it turns out we also, in a subset of patients who are predisposed to autoimmune myocarditis, set those same cells loose to attack the heart. So we can see a myocarditis and in about half a percent of patients it can be a lethal complication at getting immune checkpoint innovation. 01:51 Other forms of myocarditis. So this is one associated with Lyme disease. There is nothing really particular about this being Lyme disease except that we could demonstrate the borrelia, the little spirochetes with special stains. And that's the only reason that we particularly knew this was a Lyme myocarditis. It is a mononuclear cell inflammatory infiltrate destroying the underlying myocardium. This is another lesion, this is hypersensitivity myocarditis. This is due to any of a variety of drugs, not illicit drugs but therapeutic drugs. Antibiotics, antihypertensives, almost every category of drug that you're familiar with in a susceptible host can induce an eosinophilic-rich response. 02:35 And the eosinophilic-rich response if it becomes too robust can actually cause a lethal hypersensitivity myocarditis. Most of the time we see this is an incidental finding, we stop the drug and it goes away but in some cases it can be fatal. This is just an example of Chagasic myocarditis. We're seeing the amastigotes associated with the organism and they are invading and actually going to eventually cause lysis of that cardiac myocyte. They are expressing on the surface of the cell though some Chagasic antigens that could be recognized by the T-cell, by the host immune system and so we will have a combination of a parasitic myocarditis exacerbated by the inflammatory response. 03:27 They classically, in Chagis myocarditis associated with Trypanosoma cruzi we get involvement of the conduction system so these patients will present with arrhythmias. 03:37 But they also, for reasons that are obscured to me maybe you know, they develop apical aneurysms and this is just showing you a transillumination of an apical aneurysm of patient with very severe Chagasic myocarditis.

The lecture Myocarditis: Pathophysiology and Pathology by Richard Mitchell, MD is from the course Myocarditis and Pericarditis.

Which cytokine is well known for increasing vascular permeability in myocarditis?

Which histopathologic finding in myocarditis is consistent with macrophage fusion?

What finding is classic for Chagas myocarditis?