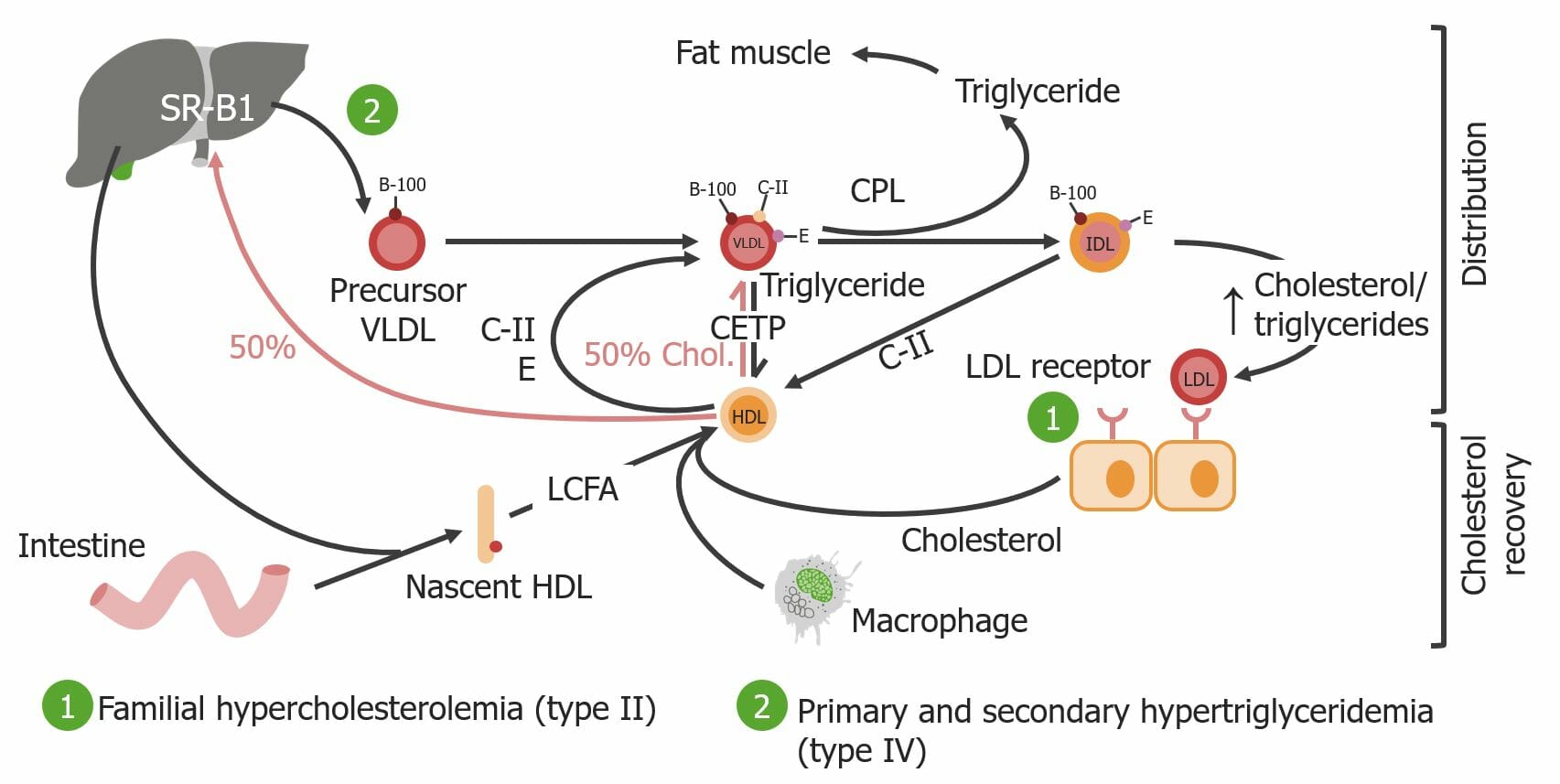 Lipid Disorders
An abnormal amount of lipid in blood is called dyslipidemia, which includes abnormal levels of cholesterol, triglycerides, and/or lipoproteins. Dyslipidemia may be primary (familial) or secondary (acquired). Both primary and secondary causes can lead to the development of premature cardiovascular (atherosclerosis) disease. Familial causes are classified according to the Fredrickson system, which looks into the pathology and the lipids that are elevated. Certain types do not increase the risk of premature atherosclerotic disease but still impact overall cardiac risk and chance of cardiovascular events in the future. Screening, early diagnosis, and strict control and management are the keys to prevention of cardiovascular events.
read more

The Cell: Cell Membrane
A cell membrane (also known as the plasma membrane or plasmalemma) is a biological membrane that separates the cell contents from the outside environment. A cell membrane is composed of a phospholipid bilayer and proteins that function to protect cellular DNA and mediate the exchange of ions and molecules. Additionally, the cell membrane allows the cell to communicate with other cells and also helps in tissue formation. Membranes are formed when glycerophospholipids and sphingolipids interact and expose their polar heads to the aqueous extracellular environment while sequestering their nonpolar tails toward the middle of the membrane. Proteins that are anchored in the membrane are responsible for cell signaling and interactions, transmembrane transport of substances, and for providing cellular structure.
read more
Load more
Share
Ask Questions
Take Notes
Download Slides
Report Mistake
Comments
show all Show less
My Notes
show all Show less
Learning Material 2
show all Show less
Report mistake
Transcript
0 of 0

00:01 Let's talk about pinocytosis. So, literally, cell drinking. 00:06 I'm gonna use the example of the LDL receptor or the low-density lipoprotein receptor, but there are many other receptors that use this pathway, endocytosis, pinocytosis, to get their cargo into the cell. 00:22 Example -- another example is the transferrin receptor. 00:25 Transferrin is gonna be the way that we bring in iron to a cell and it binds to a specific receptor also in a receptor-mediated endocytosis pathway. 00:37 So, there are other molecules that follow this. 00:39 But LDL is going to be important because defects in this receptor or this pathway can give rise to a disease that we'll talk about in a minute. 00:48 So, we have LDL floating around that binds to its receptor. 00:55 That receptor then, once it's loaded with ligand, will go to an area of the membrane where clathrin, another molecule, somewhat similar to caveolin, but different, will bind to the vesicle that's being formed, and we get a clathrin-coated pit. 01:13 And you see it there, LDL receptor with its cargo. 01:17 That will internalize into a clathrin-coated vesicle, so it pinches off, and the clathrin is what drives that process. 01:25 And in there, we now have the receptor, and many other receptors, and their cargo. We uncoat. 01:33 So, we release the clathrin and it recycles, and we will use it for another round of another clathrin-coated pit endocytosis. 01:41 But now, that clathrin-coated vesicle will mature. 01:45 In some cases, it directly matures to become an early endosome. 01:48 In other cases, it will fuse with a pre-form structure that looks like an early endosome. 01:54 In this compartment, now we have delivered the receptor and its ligand. 01:59 That receptor, ligand, is separated one from another by virtue of pumping in protons. 02:05 The change in the pH gives dissociation. 02:08 And now, we're able to separate receptor from cargo. 02:12 In this case, free LDL. The receptor, we recycle, and will go through another round. Perfect. 02:18 What about the LDL that we took up? Well, that LDL will be targeted to lysosomes where it gets degraded into its constituent components, including the amino acids and cholesterol. 02:29 And importantly, the free cholesterol that gets generated in this process will feedback inhibit to the nucleus and say, "Quit making cholesterol receptors. 02:38 Don't make any more LDL receptors. 02:41 And also, don't synthesize cholesterol." That feedback is really important because if we don't have this process, we don't have that feedback, and we have very high levels of cholesterol. 02:54 So, let's look at a disease as promised. 02:57 Familial hypercholesterolemia. 02:59 And in this disease, there are a variety of mutations that basically either make a mutant form of the LDL receptor that doesn't bind LDL or a mutant form that doesn't internalize or a mutant form that doesn't target appropriately as it goes along the way. In that case, we do not appropriately take up LDL. 03:19 We leave it out in the extracellular space. 03:23 So, we're not getting rid of all the cholesterol thats circulating. 03:26 And not only that, but we're not giving that signal to the nucleus to quit making the LDL receptor. Boo, not good. 03:34 And we are not giving the signal that says, "Don't make any more cholesterol." So, we are now making more cholesterol. This happens in hepatocytes. 03:45 We're making lots and lots of cholesterol and we're not clearing the LDL that's out there. 03:49 So, these patients will end up with markedly higher levels of circulating cholesterol, which will cause disease. 03:56 So, abnormal LDL, low-density lipoprotein, and intermediate-density lipoprotein transport, and intracellular targeting is how we have this disease. 04:09 And that receptor also takes up IDL. 04:12 There are multiple different mutations, there are many different families that are out there in the world. 04:17 Interestingly, one in 500 of us walking around are heterozygotes for this. 04:25 We have one mutant form of the LDL receptor that came from either mom or dad. 04:29 Being a heterozygote, we have two to three-fold elevated cholesterol. 04:34 Wow. I mean, higher than normal, and it's not because we're eating eggs and fatty foods. 04:41 It's because we don't have the signaling pathway that turn off cholesterol synthesis or clear LDL. 04:48 And if you're a homozygote, you get a mutant form from both mom and dad. 04:52 You have five to six-fold elevated cholesterols. That's not good. 04:57 In fact, the consequences are is that with that elevated circulating cholesterol, you will have accelerated atherosclerosis. 05:04 In a typical homozygote, we'll have a myocardial infarct, that's MI, a heart attack in their 20s due to such aggressive rapid production of atherosclerotic plaque. 05:17 So, that's one consequence. 05:20 Another one is that you will get accumulation of pure cholesterol. 05:23 These nodules on the hands and in other joints within the body are called xanthomas. 05:28 They are not particularly pathologic. 05:32 They don't necessarily cause pain, but they're not particularly attractive. 05:36 They are representation of just pure cholesterol deposition. 05:40 You can also get accumulation of cholesterol in the lose connective tissue around the eyes called xanthelasmas. 05:47 So, these are various manifestations. 05:49 Clearly, the one that's gonna be most important is having your first heart attack when you're in your 20s.

The lecture Movement of Larger Molecules Across Membranes: Pinocytosis by Richard Mitchell, MD is from the course Cellular Housekeeping Functions.

What is the primary etiology of familial hypercholesterolemia?

Which of the following is taken in by the cells through receptor-mediated endocytosis?

Which of the following is a clinical feature of homozygous familial hypercholesterolemia?

Author of lecture Movement of Larger Molecules Across Membranes: Pinocytosis