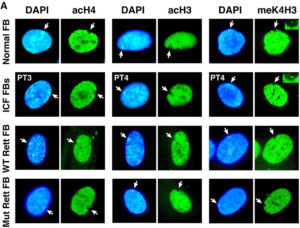 Goldilocks Principle and Monoallelic Expression
Monoallelic gene expression refers to the allele-specific expression of genes. Only one allele of the gene is actively transcribed. It can occur in different ways, such as genomic imprinting, random choice of one allele, and X-inactivation. Other allele expressions are balanced and unbalanced expressions. Balanced expressions have both alleles equally expressed, whereas unbalanced ones do not express each allele equally. Goldilocks principle states that everything should fit in a certain margin; neither too much nor too less. When the amount of gene product changes, it no longer follows the “just right” principle of Goldilocks.
read more
Load more
Share
Ask Questions
Take Notes
Download Slides
Report Mistake
Comments
show all Show less
My Notes
show all Show less
Learning Material 2
show all Show less
Report mistake
Transcript
0 of 0

00:01 The next thing we have to consider is the genomic imprinting. 00:05 And genomic imprinting is going to come up in much more detail when we look at it in the lectures on single gene disorders cuz genomic imprinting is something that happens to a chromosome. 00:22 It's marked epigenetically so that it is expressed one way in a male than it is in the female. 00:31 So let's take a quick look at how that happens. 00:34 We'll start with the top half of this figure and you can see that we have oocyte all the way over on the right-hand side. 00:40 And that oocyte has been fertilized by a sperm. 00:44 We see that it has a pink chromosome indicating that that chromosome came from the maternal parent. 00:51 Now, the male sperm comes along and fertilizes the egg and it brings in a chromosome. 00:57 That chromosome, the blue one is from the male parent so we could follow that in both directions. 01:04 And those chromosomes in those cells will stay marked the way that they are as those cells go through growth and development and we become an adult. 01:15 And so the adult will have exactly the same chromosomal markings of a paternally inherited chromosome and a maternally inherited chromosome. 01:25 And those markings will stay throughout that person's life until they themselves make gametes. 01:31 And that's where we see the grade out version of the chromosomes here because the epigenetic markers are actually removed from a chromosome during the formation of gametes or sperm and eggs so that they can be relabeled as being from an egg or from a sperm. 01:48 And thus when we continue on and have fertilization, they are labeled as maternally or paternally inherited. 01:56 Now why does this even matter? It matters because the expression – there are some conditions, one of which we'll look at specifically in much more detail later in which it has a completely different manifestation. 02:13 Whether the mutation was inherited paternally or maternally. 02:18 So one individual could have a completely different outcome based on which chromosome or the mutation coming from the parent – the male parent or the female parent. 02:30 It's certainly a complex situation but trust me, we will investigate it in much more detail later and it will make much more sense. 02:38 Or maybe it will become more confusing. 02:40 But it's certainly an interesting case and it is definitely distinct from X-inactivation which is something we've looked at before that is also – or also impacts gene expression dependent on sex. 02:55 But it's entirely different because it doesn't depend on which parent it comes from. 03:01 X-inactivation we've considered certainly before. 03:04 Dosage compensation is what has to happen. 03:08 Males have one X chromosome and a Y. 03:12 And apparently in the case of the X chromosome that is the perfect amount. 03:16 In females, well, we happen to have a little bit too much and so one of them needs to be inactivated. 03:23 And which one is inactivated is actually fairly random as far as we know. 03:28 And we seem to say these things are random all the time but it probably just means we don't really know yet what causes them to be inactivated. 03:38 So one chromosome is chosen to be inactivated and it condenses up. 03:42 And by a consequence or not it happens to be epigenetically modified so that we have a DNA methylation or histone modifications or anything that helps this DNA crumple up and be inaccessible to the transcription mechanisms. 04:01 So, the progeny of each of these two cells which could either have the pink one inactivated or the blue chromosome inactivated, all of them will have the same progeny, all of which have the same chromosome inactivated. 04:18 And you might recall from the previous course that that results in females in essence being a mosaic. 04:27 And so by mosaic, we use the example of a calico cat back then, but even our sweat glands are often mosaic because they can be X-linked and so will have patchy networks of sweat glands. 04:39 It could be that more cells have the maternally inherited chromosome and more cells have – or more cells have the paternally inherited chromosome. 04:51 And of course it really depends on where those genes are expressed, which cells they're expressed in. 04:56 So we could be a mosaic in many different ways because of this dosage compensation concept. 05:03 Again, distinct though from the imprinting that we solve. 05:08 So keep those distinct in your mind, we'll examine more conditions that involve those specific mechanisms later on in the course. 05:16 So, what we need to understand from this lecture is that there are all sorts of different ways that allow us to have just the right amount of DNA being expressed or protein products resulting from the DNA. 05:33 And often changes in the level of gene expression can go unnoticed. 05:38 But on occasion, even a very small change can have a huge clinical consequence. 05:45 And that's where we see the gene modifications that result in some of the genetic disorders that we're going to see throughout this course. 05:53 So I'm really excited to move on to the next section and help us explore chromosomal mutations. 06:00 Thanks so much for listening.

The lecture Monoallelic Expression by Georgina Cornwall, PhD is from the course Introduction to Medical Genetics. It contains the following chapters:

Which of the following is NOT a way through which we can get monoallelic expression?

Which of the following is FALSE about Genomic Imprinting?

What is an inactivated X chromosome called?

Which of the following is NOT a way that allows mosaicism?

The explanation of concepts were precise and focused. I like the pictoral representations I'll recommend the lecture to my friends, who are taking USMLE Step 1

The explanation of concepts were precise and focused. I like the pictoral representations I'll recommend the lecture to my friends, who are taking USMLE Step 1