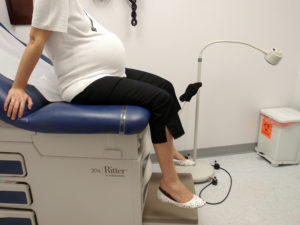 Thyroid During Pregnancy: Maternal Fetal Thyroid Pathology
Thyroid hormones are amine hormones produced by the thyroid gland. There are two types of thyroid hormones: triiodothyronine (T3) and thyroxine (T4). They are stored in thyroid follicles as a component of thyroglobulin. Once released in the blood, 2/3 of the hormones are transported while bound to Thyroxine-Binding Globulin.
read more
Load more
Share
Ask Questions
Take Notes
Download Slides
Report Mistake
Comments
show all Show less
My Notes
show all Show less
Learning Material 2
show all Show less
Report mistake
Transcript
0 of 0

The lecture Maternal-Fetal Thyroid Pathology by Carlo Raj, MD is from the course Thyroid Gland Disorders.

Which of the following is NOT a physiologic change to thyroid function expected during pregnancy?

During pregnancy, why do the levels of free T4 stay constant while T4 production increases?

Which of the following is NOT an expected change during pregnancy?

When will a fetus begin to produce its own thyroid hormone?

Which of the following will NOT occur is gestational hypothyroidism is left untreated?