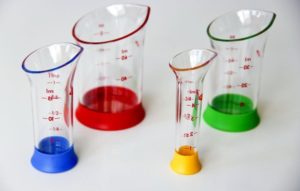 00:00 flowing concept and create age group out of it, maybe under 18 versus 18 and over. 00:02 Now when we talk about variables and how to measure them, we have levels of measurement or classifications of measurement. And depending upon which level of measurement your variable fits into, that determines the kind of statistical analysis that we can perform on that particular bit of information. The four main kinds of measurement types are nominal, ordinal, interval and ratio. 00:25 Nominal is the lowest form of measurement. It's essentially a name or a label, like the country you're born in, or your name. I can't do a lot with that information. Maybe I can compute numbers, frequencies, I can't do anything else. Some examples of nominal variables are; which country were you born in. USA, Canada, Germany, France, I can't do anything else except list them and count them. What political party do you support? What school did you attend? You may realize that these are the kinds of questions you often see on surveys, there is not a lot we can do mathematically or statistically with those kinds of variables. 01:06 So again with nominal measurements, the only computation I can apply is to count the frequencies of responses. That is not without value. It definitely has value, it's just not ideal. 01:17 Ordinal numbers are something else entirely, there are classic counting numbers. 1, 2, 3 and 4. There is a rank, so maybe I want to use an ordinal system for counting the number of doors in my house, number of rooms in a house, that sort of thing. So an ordinal measurement uses numbers to designate ordering, hence the word ordinal, there's a rank involved. 01:40 There is some information about amount, it doesn't indicate the distance between values though, how far is it between the first and second-ranked item, is it the same as the distance between the second and third-ranked item? Not necessarily, that brings up another computational problem. So here's an example, maybe I'm measuring how much you agree with a certain statement, you probably have seen this on surveys before, "On a scale of 1 to 5, how do you feel today?" or "How much do you agree with a sentiment that I'm about to express? 1, 2, 3, 4 and 5." I don't know if a distance between 1 and 2 is the same as a distance between 2 and 3 or 3 or 4 or 4 or 5, I do know that 5 is bigger than 1 however. We call that a Likert scale. Likert scale has a certain kind of analytical approach associated with them and they're very popular in psychological studies. I can't compute a mean value in a Likert scale, or an ordinal measurement, it doesn't have any meaning. 02:40 I can compute frequencies though and the median. Median is the value that's in between. 02:48 That takes us to interval measurements. The last two kinds of measurements, interval and ratio, are essentially the purest kinds of continuous measurement. Interval however, is distinct from ratio in one important way. First of all, interval measurement also uses numbers to designate order, there is order involved, there is rank involved, but the distance between values are equal, between 1 and 2 and 2 and 3, it's the same amount, so I can compute averages. For example, what's the temperature in degrees Fahrenheit? That’s a classic interval measurement. However, it doesn't make sense to have ratios when using interval measurement. That's because zero is not rational, it's constructed. 0°F doesn't have any real meaning in the real world, it was just made up for the scale. So 80°F is not twice as hot as 40°F, that's the problem, so that limits the amount of math I can do. 03:43 The last category is ratio measurements. Ratio measurements are probably our most favorite kind, because we can do everything on ratio levels. So like the others, there are numbers, we can rank these numbers, there is order, the distance between the two numbers are the same as any other two numbers that are adjacent to each other, just like the interval measurement. 04:03 We can compute averages, but there is a real rational zero. For example, what's your age? There is meaning to having zero age, what's your weight? Well if you weigh 0, you don't exist, there is meaning. What dosage did you give the patient in milligrams of drug today? Again zero has meaning. So we can apply all kinds of mathematics as something measured on a ratio scale, so it's our favorite type. 04:30 So let's summarize what we know about our four levels of measurement. With nominal measurements, all we can do is count. With ordinal, we can count, we can rank. With interval, we can count, rank, add and subtract, compute means. With ratio we can do everything. Okay, now

The lecture Levels of Measurement – Data by Raywat Deonandan, PhD is from the course Data.

A question on a survey asks, which chronic health conditions the respondent presently suffers from. What level of measurement is this?

Which level of measurement identifies variables whose values have no mathematical interpretation; they vary in kind or quality, but not in amount?

Numbers represent fixed measuring units and an absolute zero point. Ratios and intervals can often be treated as equivalents, but there is one important difference: numbers can be added, subtracted, multiplied, and divided. Which level of measurement has this factor as an asset?

Which level of measurement allow numbers to be assigned to objects or events and represents the rank order of the entities assessed?