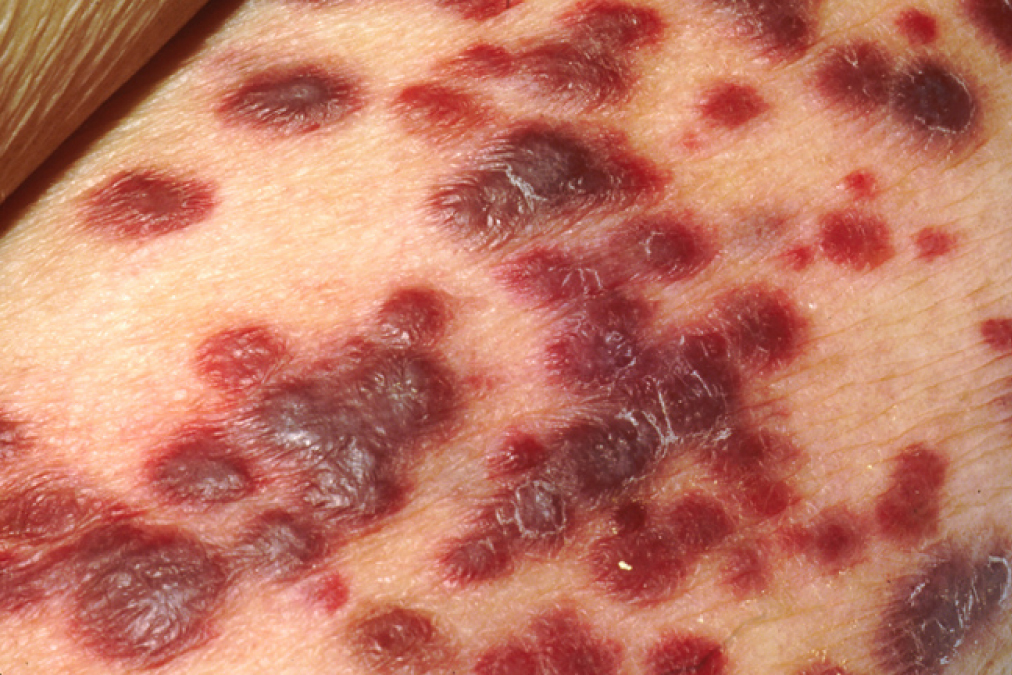 00:01 Getting now to the end, we have HHV8, or human herpesvirus 8, which has been named Kaposi's sarcoma- associated herpesvirus. 00:11 Again, you'll mostly hear people say Kaposi's virus. 00:14 This transmission is via mucosal secretions, so saliva, but especially sexual contact. 00:22 And the patients who develop diseases with this particular virus are those who are immunosuppressed, either via HIV infection, which is extended to AIDS, or those who are transplant recipients, primarily solid organ transplant patients, because they have a specific very immunosuppressive type of medication which puts them at risk. 00:44 There are four epidemiologic forms of Kaposi sarcoma, all caused by Kaposi's sarcoma associated Herpesvirus, which is also known as human herpesvirus eight. 00:54 Hhv eight. The first and perhaps most familiar, is or are the AIDS related or epidemic Kaposi's sarcoma. 01:02 This is the most common tumor arising in HIV infected people, and it is thankfully much less common in the United States and other parts of the world where antiretroviral therapy has been successfully introduced. 01:15 Demonstration of the Kaposi sarcoma in these patients is one of the AIDS defining illnesses. 01:21 The second form is the endemic or African form of Kaposi sarcoma. 01:26 This, of course, is mostly seen in sub-Saharan Africa. 01:29 It did exist prior to the HIV epidemic, but has been much more commonly demonstrated since the spread of HIV. 01:36 Possibly due to the the immunosuppression of that virus and emergence then of the Kaposi's sarcoma associated herpesvirus infection. 01:45 The third form are organ transplant associated, so not HIV related, but indeed due to chronic immunosuppression, such as seen with post transplant immunosuppression. 01:58 There may also be possible transmission of the virus itself by that transplanted organ. This is very similar to to what is seen with cytomegalovirus transmitted by an infected, transplanted organ. 02:11 The clinical features of Kaposi sarcoma in transplant associated disease are very similar to those seen with classic Kaposi sarcoma, meaning a slow growing process. 02:22 And then finally, the classic Kaposi sarcoma, which also is not HIV related, is a slow growing cutaneous disease most often seen in older men of Mediterranean and Jewish origin. 02:34 Patients with a Kaposi's sarcoma will demonstrate lesions such as you see on the images in front of you. 02:41 . The sarcoma itself is very dark and purplish, violet, to use the proper term, and they're plaque-like And you can actually see, especially in the image on the right, sort of, plaque-like skin on top of a purplish, very circumscribed lesion that actually -- both of those represent vascular proliferation. 03:00 So, we're having a reactivation to the virus itself, causing -- as a proliferative faction causing the sarcoma. 03:08 So, think of a sort of vascular or a hemorrhagic appearing plaque with scale on top of it, and that will be your Kaposi's sarcoma. 03:18 So, that's a longer presentation because the herpesviruses include some very important pathogens, many which we will see quite commonly in medicine. 03:29 But if you can, sort of, keep in mind the order, so the herpesviruses 1 and 2 are herpes simplex virus. 03:36 3 is going to be varicella-zoster virus, chicken pox. 03:40 4 is going to be Epstein-Barr virus, 5 will be cytomegalovirus. 03:46 6 and 7 are the roseola viruses, and 8 is the Kaposi's sarcoma virus. 03:52 Put all those together and you got a whole bunch of badness, which unfortunately, we'll all probably see quite frequently.

The lecture Kaposi's Sarcoma-associated Herpesvirus (KSHV) – Herpesviruses by Sean Elliott, MD is from the course Viruses.

The typical cutaneous lesions appreciated in Kaposi's sarcoma are which of the following?