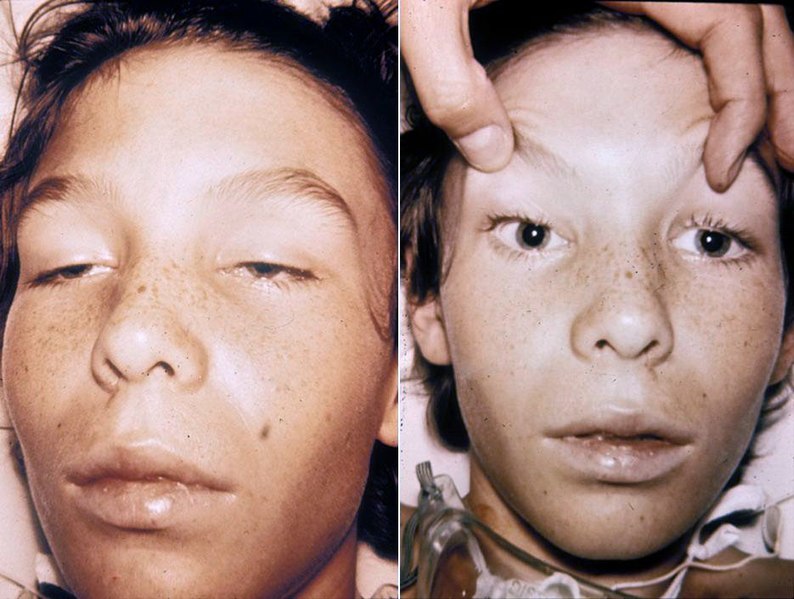 00:01 Let's switch to a less devastating condition such as infant botulism. 00:08 So, Infant Botulism is caused by the ingestion of spores of the bacteria clostridium botulinum. 00:17 The classic test question is a parent who adminsters honey to their infant under a year of life. 00:26 Infant botulism is unique in person's older than one year. 00:32 The spores are unable to germinate in the gut and therefore food-borne diease is the result of ingesting a pre-formed toxin. 00:45 C.botulinum spores can germinate in the guts of infant younger than one year because of their relative lack of gastric acid. 00:53 Decrease levels of normal flora and immature immune systems that is specifically lacking secreting immunoglobulin A. 01:03 This enviroment is conducive to toxin production, and therefore infant botulism can arise from eating the spores present in unprepared foods such as honey. 01:22 However, in reality, and not so much on the tests, most cases in the United States are not from honey. 01:30 Most cases in the United States are from living near construction sites. In areas where c. botulinum is found in the soil. 01:40 Typically, what may happen is because of a construction site the c. botulinum is aerosolized floats in the window and affects the child. 01:51 It doesn't affect the adults because again, adults would need a much higher concentration of c. botulinum. 01:57 The classic for adults is eating canned old foods. 02:01 So, in the infant, the child ingests the spores, either through breathing them in and swallowing them. 02:08 from the air or by ingesting honey. 02:13 That child then incubates these bacteria in the colon. 02:17 And the bacetria secretes a toxin botulinum toxin The botulinum toxin is absorbed and goes throughout the body and it essentially blocks acytocholine release in the presynaptic cleft of the motor neuron. 02:31 In other words, the nerves that are about to innovate the muscle is not able to get its signal through. 02:37 Infant botulism will present in a number of different ways. 02:41 An infant would often have a flat facial expression. 02:45 Whereas the infant previously was smiling, the child is smiling no longer. 02:49 The child would often have a weak cry. They can't generate the energy to cry loudly. 02:55 They often present with poor feeding. 02:57 Parents will say, my child isn't just eating as much as it used to. 03:01 They may have difficulty swallowing or maybe drooling or choking on their feeds. 03:06 You may notice Ptosis or drooping of the eyelids. 03:10 They will become hypotonic over time. Although that is a later finding. 03:15 A key finding in these children is that they may have constipation. 03:20 The decreased energy that they have or ability to constrict their abdominal muscleture makes it harder to generate the interperitonial pressure required to expulse the stool. 03:32 As a result, these infants frequently develop constipation. 03:36 They will gradually proceed to a flaccid paralysis and would proceed to respiratory failure unless they are treated. 03:44 So, if we suspect Infant Botulism, we can test the stool for the toxin. 03:50 Theraphy; because the test can take a while should be initiated in the classic case even if the testing is pending. 03:59 In reality, the vast majority of Infant Botulism cases take place in certain areas around the country such as Philadelphia where there is endemic presence of c. botulinum in the soil. 04:14 As a result, these centers are used to seeing these patients and can often identify them clinically and may initiate the therapy prior to the tests coming back if the child is progressing rapidly. 04:29 The therapy is immunoglobulin but specifically what we call BabyBIG which is Botulism immunoglobulin This immunoglobulin is directed against the toxin. 04:40 It dramatically reduces the severity of illness. 04:43 And will shorten hospitalization and significantly reduce the need for ventilation. 04:50 About half of the patients picked up eventually need to be intubated and ventillated while waiting for the resolution of the illness. 04:59 So we give the immunoglobulin. We support them respiratorily. 05:03 And in time, they should return to normal. 05:06 However, we don't give antibiotics against the botulism. 05:10 The reason being, especially Aminoglycosides are contraindicated as there administration will increase the death of the bacteria with resilience spillage of toxin, which can worsen the condition.

The lecture Infant Botulism by Brian Alverson, MD is from the course Pediatric Neurology. It contains the following chapters:

Which of the following is NOT a factor that increases the likelihood of infant botulism?

What is the mechanism of action of the botulinum toxin?

Which one of the following findings is NOT associated with infant botulism?

Which of the following statements best describes the drug BabyBIG?

A 6-month-old infant presents with a history of drooping of the eyelids, not playing or smiling, having a weak shrill cry, along with poor sucking while feeding and excessive frothing from the mouth. The mother also complains of constipation for the last 3 days. Which of the following organs is the site for incubation for the causal pathogen of the child's condition?

Which of the following is contraindicated in the management of botulism?

Excellent lecture as usual. One more topic I'm quite sure my peers have no clue about. Now I know more :) Thanks!

Excellent lecture as usual. One more topic I'm quite sure my peers have no clue about. Now I know more :) Thanks!