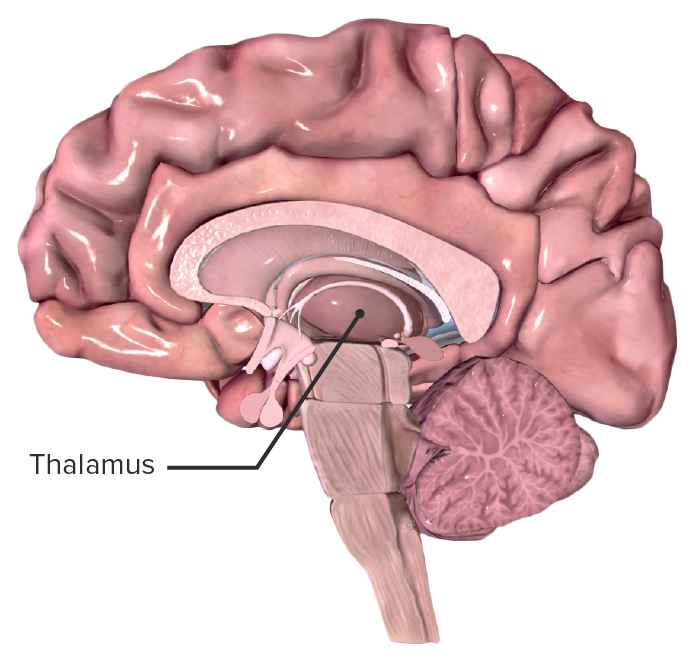 Thalamus
The thalamus is a large, ovoid structure in the dorsal part of the diencephalon that is located between the cerebral cortex and midbrain. The thalamus consists of several interconnected nuclei of grey matter separated by the laminae of white matter. The thalamus is the main conductor of information that passes between the cerebral cortex and the periphery, spinal cord, or brain stem. The thalamus is divided into anterior, medial, and lateral parts, each containing groups of nuclei that function as relay centers for sensory impulses and for the modulation of motor responses via interconnections with the basal ganglia.
read more 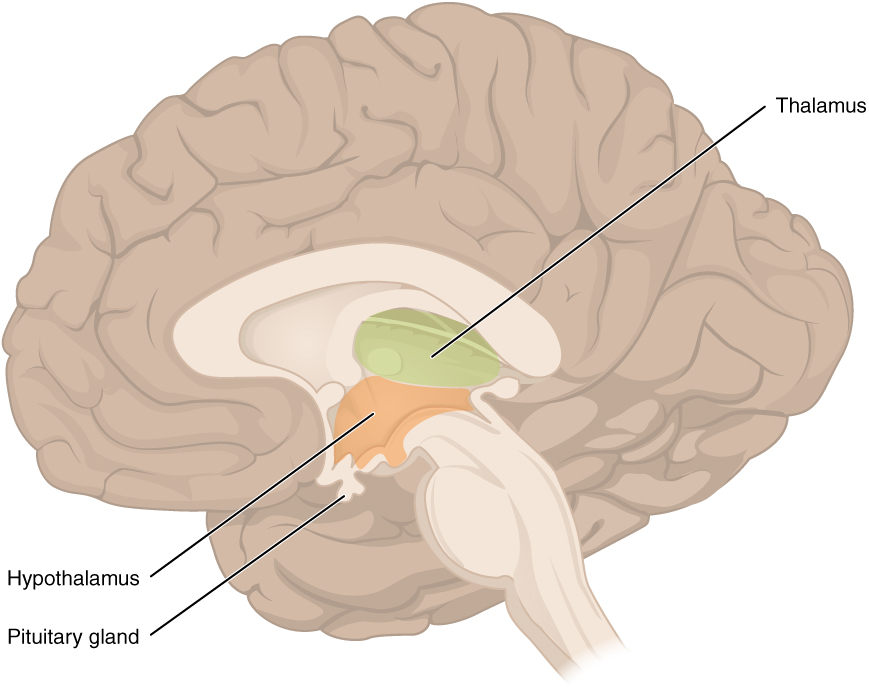 00:00 The next structure that’s a part of the diencephalon that I want you to understand is the hypothalamus. Like the thalamus, the hypothalamus is a collection of various nuclei. 00:17 You can see all kinds of nuclei identified here. So, what we will do next is I will guide you through each one of these hypothalamic nuclear structures. First would be paraventricular and supraoptic nuclei. You can see them identified in the image. 00:44 They are highlighted. Here’s your paraventricular nucleus and here’s your supraoptic nucleus. 00:51 Collectively, they are involved in the release of antidiuretic hormone, ADH as well as oxytocin. 01:00 ADH is involved in the regulation of fluid balance, so it helps to conserve water. Less water is then eliminated in the urine as a result of its influence. If there’s a lesion that diminishes ADH concentration, then the individual is no longer able to reabsorb water through the tubular duct structures of the kidney and more water then is voided in the urine. This increased urine production then results in diabetes insipidus. Oxytocin is involved in lactation in women as well as labor or parturition. Oxytocin is a substance that causes uterine contractions. 01:59 Next is the preoptic area. The preoptic area is shown here in the shaded area. This is a very important area for the regulation of body temperature, also sexual behavior and this helps to define sexual dimorphism. That is the differences in function between men and women. 02:23 Lesions of the preoptic area would result in loss of control of sexual behavior. Amenorrhea would be another symptom. Then impotence can also be a symptom with a lesion of this area. 02:42 The anterior hypothalamic nucleus is shown here in red. This too is involved in thermoregulation but it’s going to help cool the body and it helps to regulate sleep. Lesion of this particular nucleus would inhibit our ability to cool our body down. So we would have an increase then in body temperature or hyperthermia that would result. Next, I want you to understand the suprachiasmatic nucleus. This is shaded here in a light green color. It’s involved in regulating circadian rhythms. This is a result of direct input from the retina. A lesion of this nucleus would eliminate or disturb our circadian rhythms, our sleep-wake cycle. Next is the dorsomedial nucleus. First is its function. It helps to regulate behaviors that are associated with physiologic circadian rhythms. Those would include eating, drinking, and energy consumption. 04:07 It also regulates ingestive behavior as well as our cardiovascular responses to stress. 04:17 A lesion of this area would cause overeating or hyperphagia. If food intake is restricted, rage outbursts may be provoked. So that ties back into the function of ingestive behavior. Another nucleus of the hypothalamus is the ventromedial nucleus. It is highlighted right in through here. 04:47 It helps to regulate appetite, satiety, regulates our energy consumption, involved in fear as an emotion, and also helps to regulate body temperature. A lesion of this nucleus can result in hyperphagia as well as obesity syndrome. The posterior nucleus of the hypothalamus is shown here. This is another area of the hypothalamus that’s involved in thermoregulation. 05:27 This helps to increase or heat our body. If there’s a lesion of this area, we have a diminished ability to heat our body. So our body temperature becomes cooler than normal. 05:43 So we would have hypothermia as a result. Next, we have mammillary bodies. 05:50 Mammillary bodies, one of them is shown right in through here. Mammillary bodies collectively control or modulate emotions. In addition, they help to regulate recollective memory. 06:09 If there is a lesion of this hypothalamic component, memory deficits can result. It’s also involved in the pathogenesis of Wernicke's Encephalopathy. Here, we’re looking at the lateral area of the hypothalamus. This area is involved in regulating appetite and satiety. 06:39 Pain perception is also a function of this hypothalamic nucleus as is thermoregulation, digestive, and the control of blood pressure. Lesions can result in narcolepsy, motility disorders or functional gastrointestinal disorders. Eating disorders can be associated with lesions of the lateral area to include starvation and weight loss. Here, we’re looking at an inferiorly located hypothalamic nucleus, the arcuate nucleus right in here in red. 07:20 This nucleus helps to control the anterior pituitary gland with respect to releasing and inhibitory hormones. It helps to regulate hormone secretion, prolactin of the pituitary gland via mainly dopamine and growth hormone-releasing hormone, helps to regulate appetite and body weight via Neuropeptide Y. A lesion in this area can result in galactorrhea, hyperphagia, and obesity syndrome. At this point, I want you to understand how the hypothalamus influences the pituitary gland. The pituitary gland is made up of adenohypophysis. Adenohypophysis is the area that we see in through here as well as a neurohypophysis which is the area that we see here in the illustration. 08:35 The adenohypophysis is the true glandular component of the pituitary gland. 08:42 As mentioned in a previous slide, the arcuate nucleus is involved in releasing hormones that have a positive or inhibitory influence on secretions of hormone-secreting cells in the adenohypophysis. That is mediated through a portal system from the hypothalamus to the adenohypophysis. We see that portal system right in through here. This is the hypothalamic-hypophyseal portal system. Many of the hormones released from the hypothalamus have a positive influence on the secretory cells in the adenohypophysis. They would be released into this circulation and then would be delivered to the hormone-secreting cells in the adenohypophysis to promote their release. The neurohypophysis is not a true glandular structure but thus store ADH and oxytocin. As mentioned before, supraoptic and paraventricular nuclei collectively synthesize these hormones. The neurons coming from those bodies travel through the connection that exists here, the infundibulum down into the neurohypophysis. 10:15 Then these axons will store ADH and oxytocin within the neurohypophysis until the appropriate stimulus promotes their release.

The lecture Hypothalamus: Components and Functions by Craig Canby, PhD is from the course Diencephalon.

Which of the following processes would have an abnormality caused by a lesion involving the paraventricular and supraoptic nuclei?

Which of the following conditions would result from a lesion involving the preoptic area?

Which of the following statements about the anterior hypothalamic nucleus is correct?

Which of the following nuclei would be involved in a lesion that led to elimination of the circadian rhythm?

Which of the following statements correctly describes the ventromedial nucleus?

Which of the following hypothalamic nuclei is found in a lesion involved in the pathogenesis of Wernicke-Korsakoff syndrome?

Which of the following hypothalamic nuclei are involved in the control of releasing and inhibitory hormones of the pituitary gland?

es excelenete!
By Paola M. on 25. April 2018 for Hypothalamus: Components and Functions

es excelenete!
By Paola M. on 25. April 2018 for Hypothalamus: Components and Functions