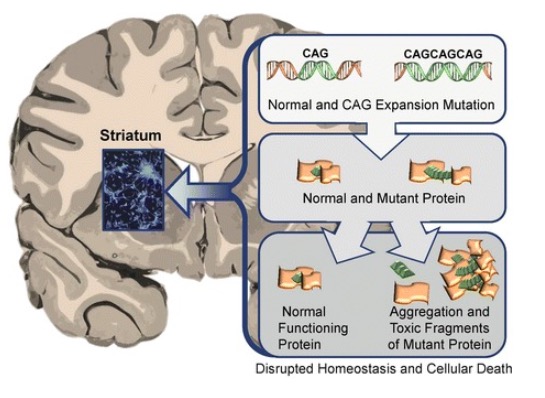 00:02 Here, we’ll quickly take a look at a condition known as Huntington’s disease. 00:06 Now, this is a disease in which in genetics, trinucleotide expansion is a big deal. 00:11 It’s an inherited autosomal dominant disease. 00:14 With Huntington, the particular gene is called huntingtin. 00:17 The -ton becomes a -tin or should I say the -ton is affected by the -tin. 00:23 By that, we mean Huntington and huntingtin is the protein. 00:31 When do you find this? Well, perhaps, fourth or fifth decade, but it all depends, right? And by that I mean a father – well, not my father, but in general – Well, actually, we don’t know. 00:39 My father died of very interesting causes. 00:42 And he did have movement disorder and there was no doctor that we were able to find in the United States that was able to properly diagnose him. 00:51 But the point being is if by chance he did have Huntington, and he then acquired it let’s say in the fifth or even the sixth decade, when we say anticipation, there’s every possibility that I am going to then develop it at a younger age. 01:03 Ever so often, I wonder if you’ve noticed, but I do actually watch my hands until you see as to whether or not I have tremors. 01:11 I know there’s something genetic going on, it’s interesting. 01:13 Know thyself and know family history so that you can do the best that you can in terms of prevention. 01:20 With Huntington, there might be choreiform type of movement. 01:23 This chorea of course means what? It’s involuntary jerking movement that’s taking place in a flow-like manner from one body part to another. 01:30 “I am flowing.” You see this? This is choreiform type of movement. 01:35 Personality and behavioral changes are something that you would find initially in your patient. 01:40 I will have to say for myself that I do have mood disorders, but not so sure if that has anything to do with anything. 01:47 Progressive dementia is also a component. 01:50 May develop parkinsonism with bradykinesia and rigidity later. 01:54 Remember, this is all related. 01:56 My goodness. 01:56 You’re down in the basal ganglia, aren’t you? And, you know, who’s to say that it’s not going to overlap into -- or overlap with other symptoms from other neurologic diseases? Very high rate of suicide even if the patient’s asymptomatic because up here, you’re not quite sure as what they’re thinking. 02:17 Death occurs 10 to 20 years after the onset. 02:21 The pathogenesis: Loss of your striatal inhibitory output to the basal ganglia. 02:26 Remember, you have excess movement, this is a hyperkinetic disorder. 02:31 And Huntington’s disease, you must know the chromosome and its involvement will be 4. 02:36 We talked about the trinucleotide, which is CAG. 02:39 You have to memorize CAG if you haven’t already. 02:43 Know a few of these. 02:44 Another one that we’ve talked about in greater detail has been CTG, your myotonic dystrophy. 02:50 The protein or aggregate. 02:52 This protein is known as huntingtin. 02:54 T-I-N, please know that. 02:57 And there will be apoptosis taking place of the neurons in Huntington’s disease. 03:03 Gross examination of your brain with Huntington, is that there will be atrophy taking place. 03:08 So there is going to be a small brain, but really, you’re going to be focusing upon atrophy taking place down subcortical in the basal ganglia including the caudate nucleus in the putamen Resulting in what’s known as a box car ventricle in a coronal MRI. 03:24 So if you do coronal MRI, think about that, and then you have an appearance of what’s known as a box-car type of appearance. 03:31 Why? Because the basal ganglia is undergoing atrophy. 03:35 Microscopically, you could expect there to be severe loss of your striatal neurons. 03:40 The treatment of choice for the chorea is tetrabenazine, even as its mechanism of action is unknown. Keep in mind there might be side effects such as depression and even suicide attempts. There is a partial efficacy of acetylcholinesterase inhibitors to treat the dementia. 03:59 For the psychological issues you need a multidisciplinary approach, neuroleptics, and GABA agonists are partially effective.

The lecture Huntington's Disease (Huntington's Chorea) by Carlo Raj, MD is from the course Movement Disorders.

A 55-year-old man comes to the physician's office complaining of involuntary movements for the last 3 weeks. He has a known history of Huntington's disease and his daughter says that he also started acting strangely in the recent past. Which of the following is this patient most likely going to develop?

Huntington's disease is an autosomal dominant disease that involves a loss of striatal inhibitory output to basal ganglia. Which of the following is true about this condition?

Dr. Raj is fun to listen to I love his excitement and personal stories.

Dr. Raj is fun to listen to I love his excitement and personal stories.