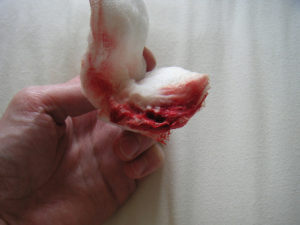 Hemoptysis — Etiology and Diagnostic Approach
Hemoptysis can be defined as the expectoration of blood during coughing that originates from the lower respiratory tract. Per this definition, coughing of blood from an upper respiratory tract illness can be excluded. While coughing blood can be alarming to the patient, it is usually a self-limiting symptom. In clinical practice, only 5% of the patients who present with hemoptysis are found to have a serious medical condition that needs further treatment.
read more
Load more
Share
Ask Questions
Take Notes
Download Slides
Report Mistake
Comments
show all Show less
My Notes
show all Show less
Learning Material 2
show all Show less
Report mistake
Transcript
0 of 0

00:01 Also, we get into haemoptysis. So, we’re gonna continue coughing, but this isn’t just rusty color, we have actual blood tinged or blood filled. It is important to distinguish blood mixed with sputum, that’s more like bronchitis from gross blood without the sputum which is a lot more ominous. Is that clear? So, the description of, well, rusty sputum and tinged is more along the lines of infection, so maybe there’s a better chance of managing your patient. Where if it’s haemoptysis and you see blood without the sputum, this is extremely concerning. 00:37 Also, you need to distinguish blood from the lungs, foamy, mixed with mucus versus blood that’s from the upper airway or perhaps even the GI tract. Think of haematemesis, okay? Haematemesis and this will be the blood that is pure red, there is no foam, there is no mucus here per se. It’s important that you understand the anatomical histology that we talked about. 01:00 Massive haemoptysis is defined as more than 100 millilitres in a 24 hour period, that’s quite a bit of blood. Now, this definition could vary, but in general, it's blood without the sputum and if you find that blood being a little foamy, maybe mucus-filled, then you know that it’s probably a cough or a blood haemoptysis originating from your respiratory tree. Common causes? Bronchitis, lung cancer and bronchiectasis. These would be common causes of haemoptysis, if it’s bad enough. 01:33 Uncommon causes, aspergilloma, what does that mean? If aspergillus which has now taken advantage of maybe perhaps a TB cavity resulting in a haemoptysis. CHF, especially mitral stenosis, isn’t it? With mitral stenosis, there could be enough of left atrial enlargement and pressure in which, my goodness gracious, not only are you pushing out your transudate, but they might actually be completely filled with blood. Goodpasture, obviously, would be haemoptysis. 02:03 Pulmonary AV malformations; AVM stands for AV malformations. Remember our concept of tachypnoea which means that your patient is going to feel dyspnoea even when standing up because you’re losing your capillaries. We have PE or infarction. Other uncommon causes, tuberculosis. You’re looking for these areas in which, remember these are microaerophilic type of organisms. So therefore, may then create that caseous type of granulomas and Wagner, formerly known, currently known, as granulomatosis with polyangiitis. Along with this, keep in mind with Goodpasture. Both of these may result in not only haemoptysis, but then also haematuria. While granulomatosis with polyangiitis may also present with recurrent sinusitis and the fact that you have complete necrotization of that nasal septum.

The lecture Hemoptysis by Carlo Raj, MD is from the course Introduction to Pulmonary Pathology.

Blood expectorated from the lungs will have which of the following gross characteristics?

Which of the following is a common cause of hemoptysis?