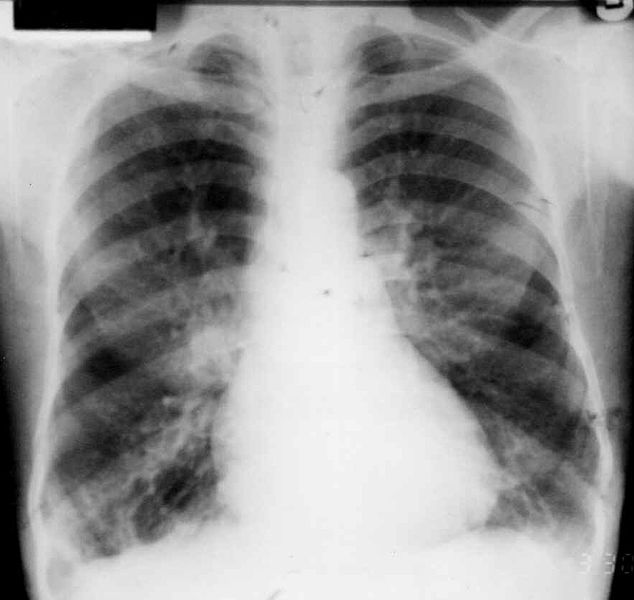 Hemoptysis
Hemoptysis is defined as the expectoration of blood originating in the lower respiratory tract. Hemoptysis is a consequence of another disease process and can be classified as either life threatening or non-life threatening. Only 5%–15% of patients with hemoptysis have life-threatening bleeding. However, hemoptysis can result in significant morbidity and mortality due to both drowning (reduced gas exchange as the lungs fill with blood) and hemorrhagic shock. The most common causes of hemoptysis include bronchiectasis, lung cancer, tuberculosis, and aspergillosis. Diagnosis involves chest imaging and bronchoscopy. In cases of life-threatening bleeding, treatment is initially directed at stabilizing the patient and, if bleeding is ongoing, hemostasis can often be achieved with minimally invasive techniques (e.g., arterial embolization).
read more
Load more
Share
Ask Questions
Take Notes
Download Slides
Report Mistake
Comments
show all Show less
My Notes
show all Show less
Learning Material 2
show all Show less
Report mistake
Transcript
0 of 0

00:00 The last subject of this lecture is hemoptysis, coughing of blood. Now minor hemoptysis as I discussed in the clinical history lecture is a common problem, and actually often irrelevant. However, it could be a warning sign of somebody who has a severe disease such as lung cancer and needs to be taken seriously when it happens for the first time. 00:22 And common causes of this are lung cancer, lung infection, bronchiectasis, pulmonary emboli, and actually many patients we are not sure why they are coughing up blood. 00:30 The point here is that patients who cough out blood and if they smoke they need a chest X ray and they'd either need a CT scan or bronchoscopy to absolutely make sure that there is no evidence of lung cancer. Major hemoptysis is a very serious problem. If you cough up 200mls of fresh blood in 24 hours that will put you at high risk of a life threatening problems. 00:54 Either due to drowning in your own blood or because of loss of volume of blood. So what causes major hemoptysis? Largely, it's lung cancer or tracheal tumours, Bronchiectasis, Aspergillomas, And tuberculosis, there are a bunch of rarer causes, but they are very rare in general. As I've mentioned, the problem here is that the loss of blood can cause hypovolemic shock, but actually more problematic is the presence of a large amount of fluid in the airways can cause essentially drowning. 01:28 How do we treat these patients? Well, straightforwardly - Clear and maintain an airway via suction, get rid of the blood in the upper airways as much as you can, so whatever oxygen you give the patient can get down into the lungs. High flow oxygen, you put in a large bore cannula, you take some blood including cross-matching and clotting, and you give the patient intravenous fluid replacement and then blood if necessary depending on how far the hemoglobin forms. 01:55 You need to do some investigations to try and work out where the source of bleeding is, chest X ray initially, maybe a CT scan, a bronchoscopy, and potentially pulmonary invasive angiography to identify the bleeding source. An important point is that if you know which lung is bleeding then you position that down, you lie the patient, if it’s a right lung, you lay the patient on the right side, and that means that any blood that’s being produced stays in the right lung, and the good lung, the left, stays clear. 02:24 You have to know where the source of bleeding is to do that, but it’s an incredibly important way of preventing the good lung being affected by the bleeding. We use tranexamic acid to promote clotting, and if somebody does have a clotting disorder, then with high INR or low platelets then you might need to use vitamin K or platelets respectively. If the patient has severe and ongoing hemoptysis that is not settling with the initial therapies then you need to think about ways of stopping the bleeding, and there are two main ways of doing that. One is that you resect the piece of lung that is bleeding and that is a lifesaving surgical maneuver. However, to do that you need to know which bit's bleeding and you also need to know whether the patient can cope with their lung function being reduced afterwards by that resection so if you are taking out the right upper lobe, that will reduce the patient’s ability to breathe. And many of those patients have chronic lung disease, that makes that not possible to do because the resection will precipitate the respiratory failure. The alternative is arterial embolization. That’s an angiography procedure where you pass a thin catheter down into the bleeding vessel which is normally a bronchiole artery rather than a pulmonary artery, and embolize it by clogging it off with small coils and metal, and that clogs off that bleeding vessel, and slows down and stops the blood production from that bleeding vessel. And again, that could be a lifesaving procedure in patients presenting with major hemoptysis. So, to summarize the discussion of airways

The lecture Hemoptysis and Major Hemoptysis: Definition and Treatment by Jeremy Brown, PhD is from the course Airway Diseases.

Which of the following best describes massive or life-threatening hemoptysis?

Which of the following is LEAST likely to cause hemoptysis?

Author of lecture Hemoptysis and Major Hemoptysis: Definition and Treatment