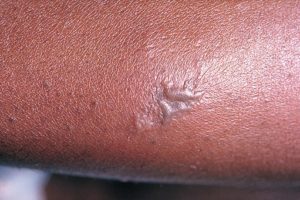 Gonorrhea (The Clap) — Symptoms and Case Studies
Gonorrhea is one of the most common sexually transmitted diseases (STDs). Approximately 1 % of the world population is infected annually, which is equivalent to about 60 million people. The severity ranges from asymptomatic infection to disseminated gonococcal infection with sepsis and hematogenic spread. In the following article, you will read everything that is important to you as a physician - from Bonjour-drops to treatment.
read more
Load more
Share
Ask Questions
Take Notes
Download Slides
Report Mistake
Comments
show all Show less
My Notes
show all Show less
Learning Material 2
show all Show less
Report mistake
Transcript
0 of 0

00:01 Turning now to the treatment of gonorrhea. 00:05 The susceptibility of Neisseria gonorrhoeae across geographic areas is quite variable. 00:15 There are some areas in the world where highly resistant gonococci are common. 00:22 And the same thing can be said for certain populations of individuals with gonorrhea. 00:30 But when we're trying to select an appropriate therapy, our therapy should be approximately 100% effective against Neisseria gonorrhoeae. 00:45 Agents that are less than 95% effective should be avoided altogether. 00:55 So if on that special occasion that you were only treating Neisseria gonorrhoeae, the agent of choice would be ceftriaxone, a third generation cephalosporin, and it is given in a single dose. 01:15 And the efficacy does approach a 100% -- the efficacy is more than 98%. 01:22 But if a patient is unable to tolerate or is allergic to beta-lactam antibiotics, other therapies are required. 01:33 And because they may not have 100% cure rate, then 1 week after treatment we would need to document by culture or by the nucleic acid amplification test, that the patient has been cured. 01:50 If you had to use, for example, a fluoroquinolone azithromycin, or spectinomycin. 01:58 But back to something I pointed out earlier, if you remember, I said that about 20% of patients who have gonorrhea will come down with non-gonococcal urethritis if you treat only the gonorrhea. 02:14 That's the main reason that when you're treating, you should treat for both. 02:20 So you give not only ceftriaxone in a single dose but you give a single dose of azithromycin -- 1 gram and that should cover both organisms, Neisseria gonorrhoeae and Chlamydia trachomatis. 02:38 So the treatment, as we mentioned, for Chlamydia trachomatis is azithromycin, but if a patient cannot take a macrolide antibiotic, then we would go to doxycycline. 02:51 And it's not as effective in a single dose, so we have to give 7 days, depending upon the susceptibility in various geographic areas and in various populations. 03:04 The question then comes, "How do we manage the sexual partners of patients who have gonorrhea?" Well, certainly they should be notified, and they should be tested for both infections, and while we're at it, tested for other common sexually transmitted diseases for example, like HIV infection. 03:26 That would be ideal. 03:28 Sometimes that's not possible, so we have something called expedited partner therapy, which would be treating a partner without examination. 03:40 This is certainly not ideal among physicians and it's actually not permitted in many countries. 03:49 And it is prohibited in some United States' states, particularly Kentucky, West Virginia, and South Carolina. 03:59 So you have to see a physician in those states. 04:07 So once treated, how long do you have to wait before sexual intercourse can resume? Somebody with urethritis should abstain from sexual intercourse for at least 7 days after they've been treated, so as to not expose the partner to these organisms. 04:30 Sexually active women less than 25 years of age, or certain women in risks group such as sex workers, really should have a pelvic exam and annual testing for Neisseria gonorrhoeae and Chlamydia trachomatis. 04:46 That's the ideal. 04:49 They certainly should have a nucleic acid amplification test on self-collected urine or a vaginal swab. 04:57 This is something that they can do in the privacy of their own home. 05:02 And it's always wise to get an annual HIV test for those persons at risk. 05:12 How do we prevent urethritis? Well, many would recommend condoms, they are certainly highly protective against the transmission of sexually transmitted diseases from infected secretions. 05:24 But I'm here to point out that the protection is not complete. 05:28 Condoms may not stay on, there may be small rents in the condom, and it can be contagious if the condom is not effective. 05:42 So another way to prevent urethritis would be to have a monogamous relationship with a partner who's never had these infections. 05:53 And then, of course, abstinence would be fool-proof. 05:58 And this brings us to the end of our discussion of urethritis.

The lecture Gonorrhea and Chlamydia Trachomatis: Management by John Fisher, MD is from the course Genital and Sexually Transmitted Infections. It contains the following chapters:

Antibiotic susceptibility of Neisseria gonorrhoeae is most significantly affected by which of the following?

A previously healthy 24-year-old male is diagnosed with gonococcal urethritis based on symptoms and a urethral smear. What is the best treatment for this patient?

How long should men with infectious urethritis be instructed to refrain from sexual activity?

Which of the following statement is MOST ACCURATE regarding managing the recent sexual partner(s) of a patient diagnosed with gonococcal urethritis?