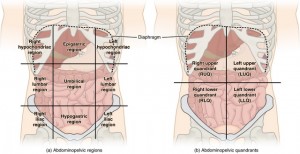 Autonomic Nerves of Abdominopelvic Organs
The primitive embryonic foregut, midgut and hindgut form the gastrointestinal tract. The foregut extends from the mouth to the proximal two thirds of the duodenum. The midgut extends from the distal one thirds of the duodenum to the proximal two thirds of the transverse colon, while the hindgut extends from the distal one third of the transverse colon to the anus.  The autonomic nervous system with its sympathetic and parasympathetic fibers and their opposing actions control all these organs.
read more
Load more
Share
Ask Questions
Take Notes
Download Slides
Report Mistake
Comments
show all Show less
My Notes
show all Show less
Learning Material 2
show all Show less
Report mistake
Transcript
0 of 0

00:00 Now, besides neural signalling molecules, we also have hormones. 00:06 There are five primary hormones And these we need to have identified because as we go through the various GI lectures, these will come up over and over again. 00:15 The first is cholecystokinin and these are released by I cells. 00:20 And these increase enzymatic secretions, contraction of the gallbladder as well as causing the pyloric sphincter to constriction Gastrin is released from G cells and these causes increase in acid secretion. 00:38 Gastroinhibitory peptide, these cause the inhibition of acid secretion as well as it also increases insulin. 00:48 And so sometimes this is called glucose insulinotropic peptide. 00:52 Motilin is released by M cells. 00:54 And this increases contractions of the various smooth muscle. 00:59 It also does something called an increase in this motility complex that will help move food stuff from the top of the GI system down to the bottom. 01:13 And these migrating motor complexes help really move food stuff along the GI tract. 01:19 Secretin is released by S cells and this increases bicarbonate secretion as well as pepsin secretion We have a few other items that we need to deal with besides the GI hormones and that is local signalling molecules. 01:37 These local signalling molecules are called paracrine signalling molecules. 01:42 But before we do that, let’s first talk through a little bit about where the GI hormones come from. 01:49 I gave you all the cells types that they come from, but now let’s talk more in generality about where anatomically they come from. 01:59 Gastrin is started off by some release from those G cells in the bottom portion of the stomach, the duodenum, and it tapers off the jejunum. 02:11 Glucose or gastric-inhibiting peptide is released in the duodenum and jejunum. 02:18 Motilin is released in the same locations from M cells. 02:22 Cholecystokinin is released throughout the small intestine, but tapers off in the ileum. 02:28 And finally, secretin follows a very similar pattern of being primarily released in the duodenum, jejunum, and then tapering in the ileum. 02:38 I promised you paracrine signalling molecules and here they are. 02:42 Histamine is one of the primary ones. 02:45 Histamine is released from ECL cells as well as mast cells and these increase acid secretion. 02:54 Nitric oxide is released by many, many different molecules and by cells in the system. 02:59 And mostly, this involves increasing both blood flow as well as relaxing smooth muscle. 03:06 Prostaglandins are also released by many different cell types and these increase both mucus and bicarbonate secretion as well it decreases the secretion of hydrogen ions. 03:19 Our final cell type of signalling molecule that we have is somatostatin. 03:22 These are released by D cells and this inhibits most secretions and these are our four paracrine signalling molecules.

Which of the following hormones is released by K cells?

Which of the following is a function of cholecystokinin?

Which of the following is a function of GIP?

Very Comprehensive lecture and lecture notes, covering a vast area within 3 to 4 mins

Very Comprehensive lecture and lecture notes, covering a vast area within 3 to 4 mins