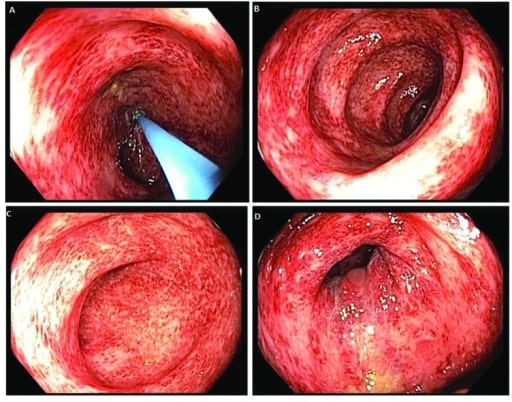 00:01 In this section, we take a look at gastrointestinal disease of the stomach and the duodenum. 00:08 We begin by looking at GI bleeding. Forms of GI bleeding and what it means to you clinically. 00:16 If there’s hematemesis, well, you’re thinking about vomiting up blood and usually it indicates bleeding proximal to the ligament of Treitz. The ligament of Treitz is dividing your GI system into a proximal and a distal portion. And it is a line between the duodenum and the jejunum. So technically speaking, that in which you find bleeding that's taking place proximal to the Treitz may result to hematemesis. 00:45 Melena. Melena to you should mean that there is enough time of the blood to then set into the feces. 00:53 And so therefore by the time the feces has then evacuated, the stools then appears to be black and tarry. Therefore, for the most part though, melena should indicate upper GI bleeding but technically speaking, it can occur anywhere from the GI tract. Anywhere. 01:11 However, if it is hematochezia then this would be bright red. And this to you should indicate that the bleeding is quite distal more so in the colon. Give yourself an example such as Diverticulosis, where you find significant bright red blood in the stools and can even have frank bleeding from the rectum. 01:31 Another common cause of this is left-sided colon cancer. 01:34 Now his clinical finding usually indicates a lower GI bleed, but in some situations such as a perforated ulcer, the rapid nature of the bleeding can shorten GI transit time resulting in a simmilar presentation.

The lecture Gastrointestinal Bleeding by Carlo Raj, MD is from the course Stomach and Duodenum Diseases.

A 55-year-old patient comes to the doctor's office complaining of blood in his stools for the past 2 days. Upon further questioning, he states that the blood is bright red in color. His vital signs are normal, and the physician orders a colonoscopy. Which of the following BEST describes the patient's condition?

Which of the following describes the stool in melena?