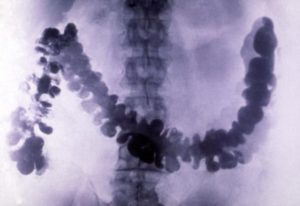 Medical X-Ray Imaging: Fluoroscopy
Fluoroscopy is an imaging technique that employs X-rays to visualize real-time images or videos of the body. The examined organ is made radio-opaque by using some form of dye. In the past, fluoroscopy studies were performed in patients suspected to have structural esophageal or upper gastrointestinal lesions and such structural abnormalities were visualized after a barium swallow. Nowadays, fluoroscopy is reserved for the diagnostic workup of esophageal motility disorders including achalasia and esophageal sphincter diseases such as gastroesophageal reflux disease.
read more
Load more
Share
Ask Questions
Take Notes
Download Slides
Report Mistake
Comments
show all Show less
My Notes
show all Show less
Learning Material 2
show all Show less
Report mistake
Transcript
0 of 0

The lecture Fluoroscopy: Barium Swallow and Upper GI Series by Hetal Verma, MD is from the course Abdominal Radiology. It contains the following chapters:

A patient recovering from a stroke is found to have pneumonia which is suspicious for aspiration pneumonia. What is the best study to evaluate for aspiration?

Which of the following regarding fluoroscopy is FALSE?

Which of the following is correct regarding barium sulphate?

Which of the following combinations of radiological findings and their associated conditions is FALSE?

Which of the following is related to gastric ulcers?