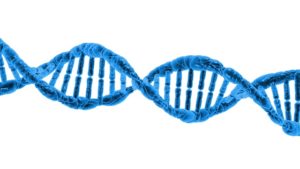 00:01 that is how great we can see what genes using single nucleotide polymorphisms? What genes might be present in someone's genome and we don't necessarily know what is being expressed. This is where expressed sequence tags come in, more tags, more acronyms, ESTs. Here we have a section of DNA and it has introns and exons, but we are not really interested in the nonexpressed pieces in the introns and so we will use the technique that we're familiar with already to make cDNA where using the messenger RNA and we will use reverse transcript to make complementary DNA of that. 00:49 And then we have now been able to sequence the ends of the expressed pieces of DNA. Rather than sequencing the whole gene, which could be expensive, the price is coming down, but previously it was very expensive to sequence the whole gene we can just use some expressed sequence tags to identify where the gene is. These expressed sequence tags will label the gene and we can look forward in a genome. Now that is great. We know that the gene is there or not there. But the key is, is it presently being expressed in the cell that we're interested in? That brings us into another phenomenomal technology, which are called microarrays or commonly knowns as biochips. You can get the genetic screening done with biochips. The biochip is a computer style chip right, very small. They could be on a microscope slide sort of medium or they could be much more like a chip. And on that chip, there is a network of tiny little loci onto which we can attach probes for DNA. These chips now contain an entire genome and we are asking the question in the cell what genes are being currently expressed? For example, if we wanted to look at a muscle cell, we would hope that that muscle cell is expressing actin and myosin and so would have the messenger RNA around for the production, translation of messenger RNA into the myosin protein. We would not expect that to be expressed in a neuron. Some things are going to be expressed in the genome and some things are not in every different cell type. We can use these microarray chips to see what is being expressed in each cell or we could use them to do a full genetic screen for a particular cancer based on expressed sequence tags that we've used to identify single nucleotide polymorphisms that we've use to identify where a mutation may be commonly. 03:19 So this is how it works.

The lecture Expressed Sequence Tags by Georgina Cornwall, PhD is from the course Genomics.

Which of the following statements are TRUE regarding expressed sequence tag (EST)?

Which of the following is NOT true regarding microarray?