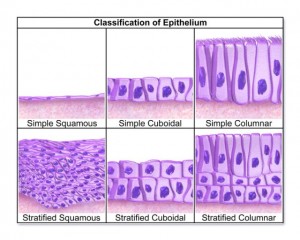 Epithelium — Functions and Types of Epithelial Tissue
The epithelial tissue is one of the four main types of tissue structures of the human body, along with muscle tissue, nerve tissue and connective tissue. Tissues are cellular organizations with similar specializations. In addition to the systematic structure, it is important for every physician - not only for dermatologists - to know the distribution and function of all types of epithelial tissue in order to transfer this fundamental knowledge into the pathology.
read more
Load more
Share
Ask Questions
Take Notes
Download Slides
Report Mistake
Comments
show all Show less
My Notes
show all Show less
Learning Material 2
show all Show less
Report mistake
Transcript
0 of 0

00:01 I mentioned earlier when I spoke about the three characteristics of epithelia that they have an apex, that they have a lateral border and they sit on a basement membrane. So these cells have polarity. Recall from an earlier part of this lecture, I explained that epithelial cells exhibit polarity and that means they have apical surfaces or apical domains. They have lateral domains and basal domains. Now if you look at the diagram shown here and you look very very carefully at the surface of the epithelium in the section imaged here, again you can see that on the surface of the cells, there is a specialization called microvilli, shown in the diagram. Microvilli are very fine structures that are one example of the surface epithelial specializations. So I am going to now look at the apical borders of some cells and describe some of these surface specializations. They are unique to epithelia. They are different and they have very important functions. They include microvilli that we saw previously on this columnar epithelium. 01:33 These microvilli are often called the brush border, particularly when we talk about tubes in the kidney or striated border sometimes when we talk about epithelial cells such as we see here lining the intestinal tract or parts of the intestinal tract. Another surface speicialization, which is really like microvilli, but they are much longer are stereocilia, and we find those in parts of the male reproductive system, particularly the ductus epididymidis.But also you see these very special stereocilia in the hair cells in the ear, and we will talk about that more when we look at the ear at a later lecture. And then, on the surface of the cells on the right hand side, I showed these previously in pseudostratified epithelium. 02:31 There are cilia, long hair like structures projecting from the cell that help to move things along the cell surface, and sometimes we call this a pseudostratified ciliated epithelium because of the presence of the cilia in certain locations of the body, particularly the respiratory tract. 02:53 Well, let's look at the surface specializations or modifications in a bit more detail, starting with microvilli or the microvillus. If you look at the histological section shown here, find the elongated nuclei of the epithelial cells. And then towards the surface, you can see some pale pink cytoplasm. But right against the clear lumen shown here, you can see just a fine darker pink line, that represents the microvillous border, the brush border or the striated border. On the right hand side is a diagram illustrating the structure of these microvilli or individual microvillus. It has a central core of actin filaments and those actin filaments project down into the apex of the cell and are connected to a parellel network of actin filaments called the terminal web. The actin filaments are project up, the microvillus are kept and linked to the tip of the microvillous or the tip of the cell membrane by the protein villin. And myosin also joins the actin filaments to the cell membrane called the plasmalemma. And along the terminal web not shown here, is lots of myosin tube fibres and they are contractile. And what they do is that they can contract and while contracting, they can fan out these microvilli like fingers fanning out in my hand. And that increases the distance between microvilli, and therefore exposes greater surface for absorption because these structures are specialized for very efficient absorption of water. They increase the surface area for that transport. Stereocilia are very similar. They are longer because the actin filaments are longer. They branch as well. And also they use different anchoring proteins to hold the actin filaments together into the terminal web and also to the cell membrane shown here. But essentially they are similar structures specialized for absorption of fluid. Let's have a look at cilia. They are totally different structure altogether. 05:33 Again look at the epithelial surface, you can see elongated nuclei of the epithelial cells, some clear staining cells. Well, right on the surface you can see some little hair like structures and a little dark line. Those hair like structures are cilia and the dark lines you see are the basal bodies of all these cilia. The cilia are composed of what we call the axoneme. It's a special arrangement of nine plus two pairs of microtubules and those microtubules enable the cilia to be motile. And the microtubules are inserted into the basal bodies at the apex of the cell and all those basal bodies are actually connected in many ways to each other. And that allows the cilia to be in unison together in one direction or the other, and therefore move along the surface of the epithelium, foreign bodies, secretory products or even cells. Let's now look and see how epithelial cells

All but which of the following may be found on the apical surface of epithelial cells?

Where in the human body are steriocilia found?

Which of the following types epithelium is found in the respiratory tract?

What is the main component of the structural core of a microvillus?

great to keep up with, love the questions after the video, wish there was more though

great to keep up with, love the questions after the video, wish there was more though