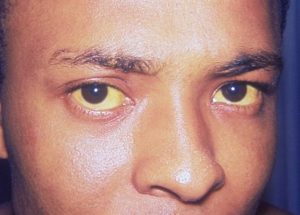 Bilirubin and Biliverdin Reductase
Bilirubin is a yellow compound that is the product of the catabolism of ageing heme. It can be used to determine abnormality in liver functions as characterized by the yellowing of skin and mucous membranes such as sclera of the eyes and dorsum of the tongue. In this article, we will discuss about the biochemistry of bilirubin; specifically, the synthesis of the compound and the important enzymes used in the synthesis of this biomolecule.
read more
Load more
Share
Ask Questions
Take Notes
Download Slides
Report Mistake
Comments
show all Show less
My Notes
show all Show less
Learning Material 2
show all Show less
Report mistake
Transcript
0 of 0

00:01 So, I previously talked about how bilirubin is involved in that cycle of converting reactive oxygen species. 00:09 And that's the recycling that's happening of the bilirubin and biliverdin in the process. 00:13 With this slide I wanna talk about how it is that bilirubin is either eliminated through the feces and urine or how it's recycled using the portal system of the body? The process starts as before with heme being converted into biliverdin and biliverdin being converted into bilirubin as we can see here. 00:30 Conjugation of the bilirubin creates bilirubin diglucuronide which is necessary for the bilirubin to be soluble in the bile system as we can see here. 00:40 So the movement of bilirubin through the system involves the conjugation of bilirubin to diglucuronide to solubilize it so that it can appear in the bile. 00:50 Moving from the bile, the bilirubin diglucuronide enters the intestinal system where it is metabolized by a bacteria. 00:57 These bacteria convert bilirubin diglucuronide into urobilinogen. 01:02 Now, the urobilinogen has a couple of different fates that it can undergo. 01:07 One fate is to go through the portal system and be recycled back into biliverdin. 01:13 Recycling is important because it saves additional things that the cell might need. 01:18 Remember that converting the biliverdin into bilirubin and then going back was saving – or giving protection against reactive oxygen species. 01:27 So, making more of that cycle might help if reactive oxygen species are a consideration. 01:32 On the other hand, the urobilinogen can pass through the intestinal system and be oxidized. 01:39 Whereas in this case, converted into a molecule known as stercobilin. 01:44 And stercobilin whose structure as you can see on the screen here, is a molecule that gives feces the distinctive color that feces has. 01:51 In addition, urobilinogen can be moved into the bloodstream. 01:55 Now, if it's moved into the bloodstream, then it becomes metabolized, to become urobilin and is excreted out of the bloodstream by filtering of the kidneys to give the yellow color of urine. 02:07 There's a lot of possible things that can happen here to bilirubin as a result of that. 02:11 One of the things that can happen if a person has a bile duct obstruction is that bilirubin doesn't make it through this system and instead bilirubin diglucuronide goes straight to the kidneys. 02:24 When these happens, urine that's produced is dark because that's the color of the bilirubin diglucuronide and the feces become much lighter as the consequence of that. 02:34 Now, jaundice is a disease that results from problems associated with the inability to excrete a bilirubin. 02:42 It rises in the body and gives a distinctive yellow color to various tissues. 02:49 You can see a person on the top photo who has a yellow skin color rising from bilirubin accumulation and the sclera of the eyes can also turn yellow as seen here. 02:58 Now, one of the treatments for jaundice is to expose a person to bright light because light will actually degrade bilirubin. 03:06 There are many possible ways that a person can get jaundice, one is by having a deficiency of the enzyme that does the conjugation. 03:13 That's the one that puts the glucuronic acid onto the bilirubin. 03:17 This disease is known as Gilbert's syndrome. 03:19 Liver disease also causes this because liver is a place where this conjugation can occur. 03:27 Pancreatic cancer also gives rise to jaundice. 03:30 And sickle cell crisis or sickle cell anemia is of common cause of jaundice as well because in sickle cell anema, the sickle cells are being taken out of the bloodstream with increased repeteadly, and therefore causing an increase amount of heme to accumulate. 03:47 Metabolism of heme is of course is what gives rise to the bilirubin. 03:51 Obstruction of the biliary tract as I've just described, is another way in which jaundice can be created. 03:57 And in newborns, it's not uncommon for newborns to have problems with balance in the amount of bilirubin that they're making and so they commonly develop jaundice, but it's usually very minor in newborns. 04:08 And another way to get this is through excess hemolysis of the blood cells. 04:13 This is one of the things that's happening, for example in sickle cell anemia but other diseases or other problems can cause blood cells to hemolyze and give rise to jaundice. 04:23 Now, the conjugated versus unconjugated jaundice really refers to what I've described as whether or not the glucuronic acid is attached to the bilirubin that's associated with the jaundice and whether it's conjugated or unconjugated can give some clues as to where the problem in the body is that's arising to cause it. 04:42 Very high levels of bilirubin in the brain can cause damage so this is one of the reasons that we have concerns about jaundice because the brain can be affected by that. 04:51 Conjugated bilirubin in the urine can indicate liver disease and so that again is telling us where we have the problem arising. 04:59 And biliverdin that appears in the blood is also an indication of liver disease. 05:03 Biliverdin is distinct from bilirubin and that biliverdin is a very dark green color and bilirubin is a distinct yellow. 05:10 Now, there are on the other hand some benefits to bilirubin it appears and that's not totally surprising if we think about it because bilirubin, remember, when it's converted backwards to biliverdin is protecting against reactive oxygen species. 05:25 And reactive oxygen species maybe a factor in aging so older people who have higher levels of bilirubin but no have -- no liver problems may have more ability to function independently. 05:37 Well, in this lecture I've talked about the interesting compound of bilirubin and how it affects the things in our body relating to reactive oxyen species and how a very interesting protein, the biliverdin reductase is involved in so many body processes.

The lecture Enterohepatic Circulation and Health by Kevin Ahern, PhD is from the course Amino Acid Metabolism.

Which of the following is true regarding the movement of bilirubin in the body?

Which of the following is true regarding bilirubin?

Gilbert’s syndrome is caused by the deficiency of which of the following?

The intestinal flora metabolizes the bilirubin diglucuronide to which of the following?

I was impressed by the knowledge of the professor. However, the very short length of each lecture was disturbing and distracting.

I was impressed by the knowledge of the professor. However, the very short length of each lecture was disturbing and distracting.