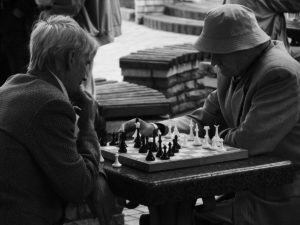 00:01 Let’s take a look at now if we start dividing our attention. 00:04 And we’ve all done this before and this comes back to that initial statement I made is that we have a certain amount of resources in order to deal with attention and what’s in front of us. 00:14 How do you decide how much you can do at once? And we’ve all tried to multitask before, right? So divided attention is the ability to successfully execute more than one action at a time. 00:24 Some are great at it. 00:27 You can be on the phone, you can be driving your car, you could be disciplining your kid, you know, and you’re adjusting the radio, all at the same time. 00:34 And some people really can’t do more than one thing at a time without, you know, messing up. 00:39 This gets us to things like texting while driving. 00:42 That’s divided attention or having your attention away from the road and trying to text, most of us you can’t either well. 00:50 So what we’re talking about here is how you manage that and what is the amount that you can actually do? So inputs are from two or more channels of information or modalities. 01:00 So what we’re saying here is it doesn’t have to be two visual tasks or it doesn’t have to be two auditory tasks, it can be you looking at the road and you trying to converse with somebody. 01:12 So two different things that you’re doing, two different modalities. 01:16 And the resource model of attention states that we have a limited pool of resources. 01:21 And it doesn’t matter how many tasks you attempt to do, you cannot exceed the resources that you have. 01:29 So take out three different factors that would impact performance of multitasking, first being task similarity. 01:35 So if it’s similar, multitasking becomes increasingly difficult. 01:40 So if I’m asking you to cut an onion and cut an apple at the same time. 01:46 They’re both cutting, they’re both requiring the same type of activity. 01:51 The task is very much related, it becomes increasingly hard. 01:55 But if I ask you to cut a tomato while visually looking at something, or trying to talk to somebody, that becomes doable, okay? Now as the difficulty of the task increases, the ability to multitask decreases as well. 02:10 So trying to do an algebra problem while trying to recite all the countries of the world, fairly difficult, you wouldn’t do either very well. 02:21 But if you’re looking at two simple things like cleaning a table and talking on the phone, we’ve all done that before, right? Really, this is really basic, and talking on the phone is pretty straightforward as well. 02:32 And there’s another thing called task practice and this is when if you practice something, you’re converting it from being a complicated or complex task to something simpler. 02:42 So practice reduces resource demand and it becomes automatic, or you initiate something called muscle memory. 02:48 You see this quite commonly in athletes. 02:51 They ask you to do something over and over and over like in the example I have used in the previous lecture, shooting free throws in basketball. 02:57 And they ask athletes to shoot that shot over and over and over, thousands of times, so that this motion becomes automatic. 03:06 And found in doctors doing surgeries, in order to expedite and make things go very, very fast because they need to think and be doing motions at the same time. 03:16 They repeat, repeat, repeat on cadavers or on other carcasses from animals to practice doing stitches or complicated surgeries so that they’re not actually thinking about what they’re doing and they’ve implemented and converted a complex task into something quite simple and are using muscle memory. 03:33 Okay, so if we tie all this together, it’s allowed us to understand how it is that we actually filter out different types of information and how we can focus on what’s pertinent to us while still bringing in other types of information. 03:45 And it’s also allowed us to understand how we’re able to manage our limited resources.

The lecture Divided Attention – Attention (PSY) by Tarry Ahuja, PhD is from the course Making Sense of the Environment.

Which factor is unrelated to multitasking capability?

What do running and listening to music require?