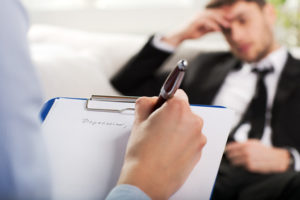 Major Depressive Disorder (MDD, Depression) — Definition and Treatment
Major depressive disorder (MDD) is a unipolar mood disorder characterized by persistent low mood and loss of interest in association with somatic symptoms. The overall incidence of the disease is 6.7 % with prevalence increasing with age. Monoamine oxidase deficiency and amine neurotransmission abnormalities are the incriminated causes of the disease. Psychotherapy, pharmacotherapy and electroconvulsive therapy (ECT) are the modalities used to treat the disease. Its leading cause of mortality is suicide, which is more common among the elderly population.
read more
Load more
Share
Ask Questions
Take Notes
Download Slides
Report Mistake
Comments
show all Show less
My Notes
show all Show less
Learning Material 2
show all Show less
Report mistake
Transcript
0 of 0

00:01 What about treatments for depression? Let’s move into the management, now that we've defined it. 00:06 First of all, we can’t forget about talk therapy. 00:08 Cognitive therapy is just as effective as prescription treatment for patients with depression and it has the added benefit of giving patients a skill set. 00:18 Since depression is frequently a recurrent illness for many patients, it's important to have some kind of framework and a skill set that you can use to fight not just this episode of depression, but the one that will happen in four years from now, eight years from now. 00:33 And cognitive therapy gives patients that skill set. 00:36 And that, medication cannot do. 00:41 What about another little-known and underused regimen for depression, but they can be highly effective? What about exercise? So, this is – there is a systematic review, 37 clinical trials of exercise and depression. 00:55 Overall, exercise was found to have a moderate effect on depression. 00:59 And there was in trials with higher quality, slightly less effect, but still significant. 01:06 And it was maintained over the long term. 01:09 And I think the most interesting thing from this review was that there were seven trials, which compared exercise and psychological therapy, no difference between them. 01:18 Four trials compared exercise and pharmacological therapy, no difference between them. 01:22 This tells me that, if nothing else, exercise should be part of the treatment regimen for patients with depression. 01:29 Maybe it’s not the only treatment that’s recommended, but it should be part of the regiment and highly recommended to patients because it also, we know, has benefits for stress, anxiety and, of course, bodyweight metabolism as well. 01:44 In terms of specifically medications that fight against depression, the general rule is that when you give one of these medications, about a third of patients will experience remission of depression, a third will get a response without achieving remission, and a third really experience no benefits. 02:02 So, the rule of the thirds with antidepressant therapy has been true for quite some time if you look across clinical trials. 02:11 Some things to note, some high-yield facts regarding medical therapy for depression. 02:16 Serotonin norepinephrine reuptake inhibitors are slightly more effective than selective serotonin reuptake inhibitors (or SSRIs) in the treatment of depression, but that increased efficacy is counterbalanced by higher risk of adverse events. 02:33 And so, therefore, it's really what your patients can take over time and tolerate and what they do well on is the most important factor in determining, which is the right antidepressant for your patient. 02:44 And that’s why, I think, the most critical question for patients – because depression is frequently recurrent, have they tried anything in the past? If they took a certain medication in the past and it worked for them then, it's highly likely that it’s going to work for them now. 02:59 And so, that's the first thing to consider. 03:01 And also, that question allows you to identify that maybe the patient tried drug X, Y or Z and had side effects or didn't work, and, therefore, those can be crossed off the list. 03:11 You’re going to use something different. 03:13 But, yeah, always ask about that past history of depression and particularly what treatment they used. 03:17 Hopefully, they will remember it or you have it in your record. 03:22 Remember that antidepressant therapy is not as effective for mild forms of depression. 03:26 Sometimes those patients just do better with talk therapy alone. 03:29 I try to move them more towards that type of treatment. 03:33 But for severe depression, that's where antidepressant therapy has its best record of efficacy. 03:39 And once you initiate an antidepressant, I tell patients that we are going to recommend that you continue this treatment for at least six months and preferably 12. 03:49 We know that discontinuing the drug, which many patients do, two or three months into treatment, they feel better, they don't know why they're taking this drug anymore because they feel cured, once they discontinue the drug before six months, there's a very high rate of recurrence. 04:05 So, they should really commit to taking it for a year. 04:08 And I talk about that before I even write the initial prescription just to get that commitment from a patient.

The lecture Depression: Therapy by Charles Vega, MD is from the course Chronic Care.

Which of the following statements regarding the treatment of unipolar depression is MOST ACCURATE?

Which of the following is the most appropriate therapy for unipolar depression?

Which of the following statements regarding treatment of depression is MOST ACCURATE?

It's a great and precise lecture, it has helpful facts like the 1/3 rule. Thank you very much.

It's a great and precise lecture, it has helpful facts like the 1/3 rule. Thank you very much.