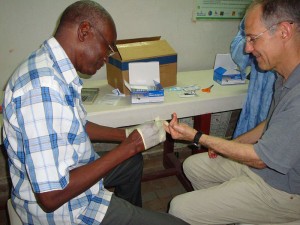 Why do we call it a contingency table?

What is the absolute risk of a cigarette smoker developing lung cancer in a population of 200 people where half of the population smokes. Out of the general population 10 people were diagnosed with lung cancer, of which 9 were smokers and only 1 was a non-smoker