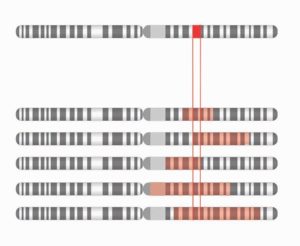 00:01 Welcome back to the second lecture on genomics. In the last lecture, you learned about DNA sequencing and how we might sequence a whole genome. But the study of genomics is really about figuring out what the DNA sequence means. We will be exploring this question of what does it all mean throughout this lecture establishing what sorts of DNA are in genomes. By the end of this lecture, you should be able to discuss why sometimes a larger genome is not necessarily a more complex genome. In addition, you will be able to characterize the classes of DNA that we find throughout the genome and recognize the impact of transposable elements. This is a big field. And also, you will be able to explain why single nucleotide polymorphisms are so useful in genetic analysis. The question is why are some organisms with less genes often more complex than those who have more genes? This question came up because when we sequenced the human genome in 2000, the results came out and they said "Wow! Amazing. 01:15 There are only about 30,000 maybe a few more genes in the genome." We really wanted to push it up to 40,000, but turns out that after further analysis, it is more like 20 to 25,000 and that didn't make us feel particularly good because it is not much different than we see in a fruit fly and things like corn and maize have much more genetic diversity than we do, or genetic code than we do. Many more genes in some of these plants than there are in humans, however, we'll like to think of ourselves is being a little bit more complex than a fruit fly. We figured that there would probably be many more genes and so actually the genome sequencing project was finished rather early. We certainly thought we have a little bit more than corn going on, but it turns out we didn't. The question then comes to what really is going on and how can we decode this code? The field of genome annotation involves not only the sequence. We are taking the base sequence, but then we are annotating what things might do in that sequence. Is this a coding section of DNA or is this a noncoding section of DNA? What does it look like? And we have recognized some pretty consistent patterns throughout the genome and so in this lecture, we will look at some of those patterns and how they can manifest themselves in altering gene expression. The key really is that in humans we have more complexity because pieces of the genome that are what we used to think were junk actually are not junk at all. They have a lot to do with regulating the number of genes and their expression or regulating its expression of the number of genes that we have. Let us look for a moment initially when they scan through the genome, they looked for start codons and stop codons and you could see how many genes there were just by examining start and stop codons. The space between the start and stop codons is called an open reading frame so that open reading frame could tell us that "Okay, we have a section of DNA in here that codes for something", and then what is it code for. We can look at what is it code for and you get into the field of proteomics, but we are not going there. We are going to stay with genomics for this lecture. Then what happened. We noticed that there were alternative splicing mechanisms. We have covered this already in the production of our mature messenger RNA. You could have a series of introns and exons, we’ve got the five prime on translated region and three prime on translated region and we have exons and introns. We could have alternative splicing such that one mature messenger RNA ends up producing a protein of one type versus another way of cutting it into different pieces putting different introns together could lead us to another protein. In that sense, one gene could code for multiple forms of a protein.

The lecture Comparative Genome Analysis by Georgina Cornwall, PhD is from the course Genomics.

“Junk DNA” is an essential part of the human genome. Why?