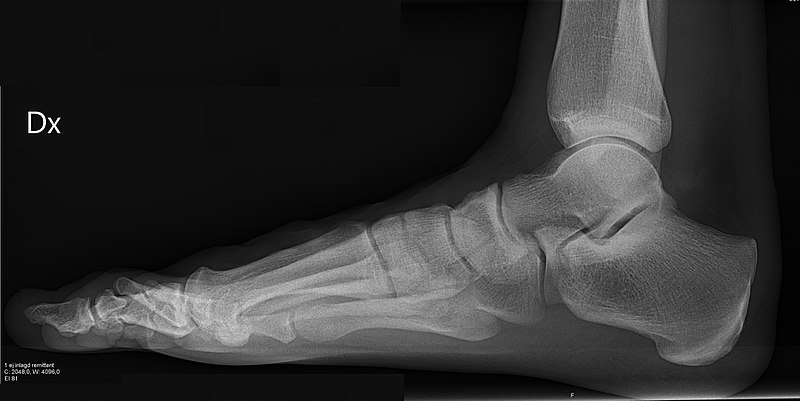 00:01 So there are 3 different major techniques that are used with chest x-rays. 00:05 Let's take a look at each one. 00:08 So we have inspiration, penetration, and rotation, and each of these can change the appearance of the chest. 00:16 So this is an example of an expiratory film versus an inspiratory film. 00:24 When a chest x-ray is obtained, you really want to obtain it in optimum inspiration. 00:28 So that means about 8 to 9 posterior ribs should be visible. 00:32 So taking a look at this inspiratory film here. 00:35 The way you count the posterior ribs, is this so the ribs that are seen best are the ones that are posterior, these are the ribs that are right here. 00:45 And you wanna start from the top and just count all the way down to the bottom. 00:49 A low inspiration results in crowding of the lung markings. 00:53 So as you compare this expiratory film versus the inspiratory film, you can see that there is crowding of the lung markings. 01:00 The lung volumes look actually a lot lower on the expiratory film than they do on the inspiratory film, and everything because of that just looks very hazy. 01:07 So often times it's difficult to detect an abnormality on a patient that doesn't have a good inspiration. 01:13 Penetration is another technical Factor. 01:17 So the film on the left is over penetrated, while the film on the right is underpenetrated. 01:23 Penetration refers to the amount of x-rays that are passing through the area that's being evaluated, and penetration can differ based on patient body type. 01:31 So if a patient? if a film is over penetrated, that means everything will appear very dark, and that can mimic abnormalities such as a pneumothorax which we?ll discuss later. 01:40 If a film is underpenetrated, then everything will look very white and that can make it very difficult to actually see what's going on in the lungs. 01:47 Rotation is another technical factor. 01:52 If a patient is rotated, the mediastinum and hilum turn towards the side of rotation and they appear larger on that side which can mimic a mass. 02:00 So this is an example of three different types of rotation. 02:05 The first one is normal, the middle one represents a patient that's rotated to the right, and the last one represents a patient that?s rotated to the left. 02:13 So to tell whether a patient is rotated or not, the easiest way is to look at the medial ends of the clavicles and they really should be equidistant from the spinous process. 02:22 So let's take a look here. 02:24 On this first film here is the medial end of the right clavicle and here is the medial end of the left clavicle. 02:31 If you look right in the midline here, these are the spinous processes. 02:36 So you want to be equidistant from the spinous processes which this one is and this is the typical view that we would want to obtain the film in. 02:43 If a patient is rotated to the right, you have more space between the right clavicle and the spinous process than you do between the spinous process and the left clavicle. 02:54 So you can see here, it almost looks like there's a little bit of a mass that's projecting on this side and that's really just the mediastinal structures that are turning towards the side of rotation, similar to a patient that?s rotated on the left where there's more space between the left clavicle and the spinous process than there is between the right clavicle and the spinous process. 03:14 So it's important to develop a normal algorithm to take a look at a chest radiograph. 03:19 This is important in all of radiology for every imaging study that you look at, you wanna have a normal algorithm. So that you ensure that you look at every single structure that's present on the film. So this is an algorithm that I use when looking at a chest x-ray. I first take a look at any abnormal tubes, lines, and foreign objects. Patients that are in the hospital may have multiple different lines and tubes that are placed within them and you wanna make sure that you look at all of these and to ensure that they're in satisfactory position. 03:45 I then take a look at the lungs, I next look at the airway that includes the trachea and the bronchi. 03:52 You wanna take a look at all of the mediastinal boundaries and make sure that they look normal without the presence of any mass. 03:58 I then take a look at all of the surrounding soft tissues including the soft tissues of the shoulders, the neck, and the chest. 04:06 I take a look at the bony structures, and you can see multiple ribs, you can see clavicles, you can often see the shoulders as well on a chest radiograph. 04:16 And then lastly, I take a look at the upper abdomen. 04:18 Although, we don't see a very large portion of the upper abdomen. 04:21 We do see a small portion and it's important to make sure, that if there are any abnormalities, we see them on the chest radiograph.

The lecture Chest X-Ray Techniques by Hetal Verma, MD is from the course Thoracic Radiology. It contains the following chapters:

How many posterior ribs should be visible on a chest radiograph with an optimal inspiration?

Which statement regarding the chest X-ray techniques is FALSE?

Thank you. Basic that were never taught to us is very clear now.

Thank you. Basic that were never taught to us is very clear now.