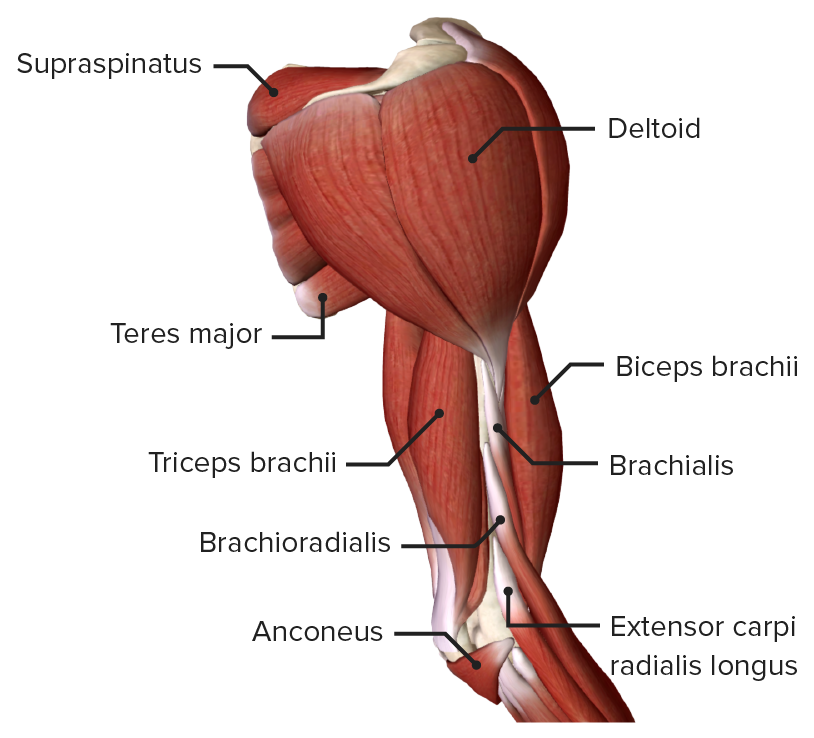 Arm
The arm is the region of the upper limb that extends from the shoulder to the elbow joint and connects inferiorly to the forearm through the cubital fossa. It is divided into 2 fascial compartments (anterior and posterior) and houses numerous structures, including the humerus; the brachial and profunda brachii arteries; the basilic, cephalic, and brachial veins; the radial, median, ulnar, and musculocutaneous nerves; and the flexor and extensor muscles of the arm.
read more
Load more
Share
Ask Questions
Take Notes
Download Slides
Report Mistake
Comments
show all Show less
My Notes
show all Show less
Learning Material 2
show all Show less
Report mistake
Transcript
0 of 0

Which statements concerning the axilla are correct? Select all that apply.

Which muscle forms part of the posterior wall of the axilla?

The axillary nerve is a branch from which part of the brachial plexus?

Which root forms the middle trunk of the brachial plexus?

Which cords of the brachial plexus form the median nerve?

Which roots form the radial nerve?

Dr. Pickering pointed out a few things that even my anatomy professor (who is excellent) did not. A very good lecture on the brachial plexus -- both short and detailed.

Dr. Pickering pointed out a few things that even my anatomy professor (who is excellent) did not. A very good lecture on the brachial plexus -- both short and detailed.