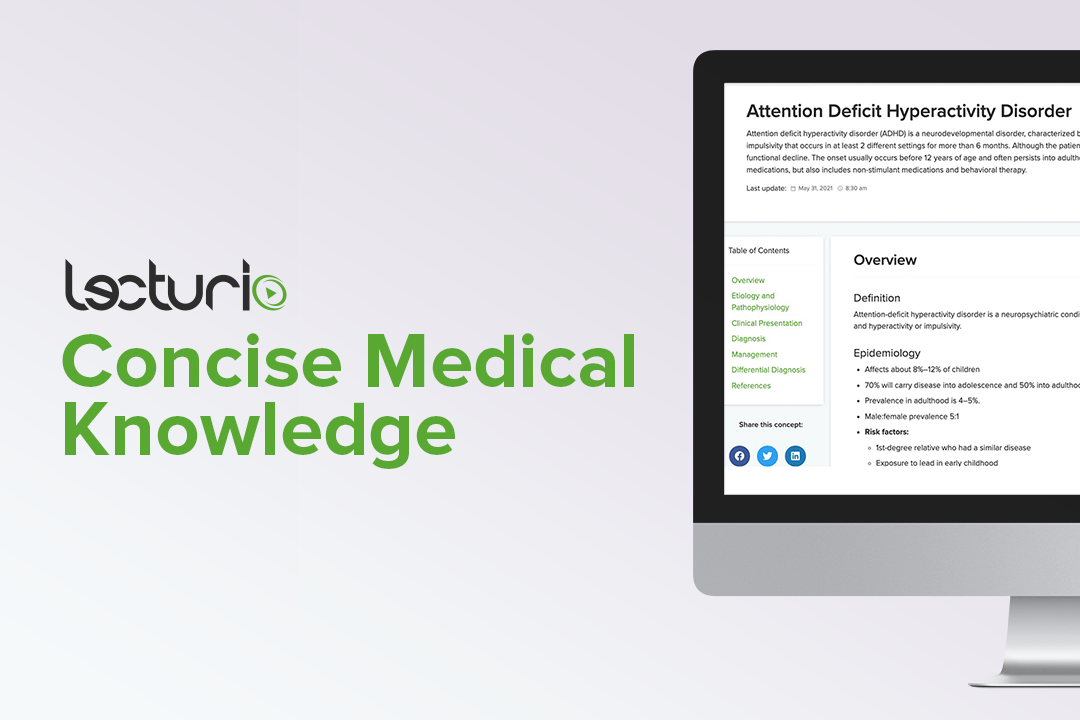 Attention Deficit Hyperactivity Disorder
Attention deficit hyperactivity disorder is a neurodevelopmental disorder characterized by a pattern of inattention and/or hyperactivity-impulsivity that occurs in at least 2 different settings for more than 6 months. Although the patient has normal intelligence, the disease causes functional decline. The onset usually occurs before 12 years of age and often persists into adulthood. The 1st line of treatment is stimulant medications but may include non-stimulant medications and behavioral therapy.
read more
Load more
Share
Ask Questions
Take Notes
Download Slides
Report Mistake
Comments
show all Show less
My Notes
show all Show less
Learning Material 2
show all Show less
Report mistake
Transcript
0 of 0

00:01 Let's move on now and talk a little bit about ADHD, Attention Deficit Hyperactivity Disorder. 00:07 This is defined as at least six symptoms involving inattentiveness, hyperactivity, or both that have persisted for at least a 6-month period. Inattention means problems listening, concentrating, paying attention to details, organizing tasks, or being easily distracted or forgetful. 00:28 Hyperactivity and impulsivity requires blurting out or interrupting others, fidgeting, leaving one's seat, or talking excessively. The onset is before age 7 and the behavior is inconsistent with the age of development. Now, let's take a look at ADHD, conduct disorder, and oppositional defiant disorder. So two-thirds of children with ADHD will actually also have either a conduct disorder or ODD. There's a 3-5% prevalence in school-age children and it is far more common in boys to have ADHD than in girls. 01:06 There's also an increased incidence of personality disorders, mood disorders, conduct disorders, and oppositional defiance. Most cases remit in adolescence but 20% of people will have symptoms that persist well into adulthood. Also worth noting, there is an adult variant of ADHD. 01:26 So what causes it? Well, there are genetic factors, maybe exposure to prenatal trauma or toxins, neurochemical factors, neuropsychological, and psychosocial factors. 01:39 The treatment again is multimodal, involving pharmacotherapy, often stimulants or antidepressants. 01:47 So when it comes to treating ADHD, there's a medication that was initially formed as an antidepressant called atomoxetine which is actually now useful in the treatment of ADHD. 02:00 Similarly, buproprion a classic antidepressant is used for the treatment of ADHD and then be on that stimulant medications such Ritalin and Adderall can be very helpful. 02:13 Psychotherapy can also be useful, parent counseling and group therapy. 02:18 Never overlook the importance of encouraging the child or your patient to organize their tasks better and be a little bit more aware of their surroundings and develop organizational skills. This can go a long way in helping with their ADHD symptoms.

The lecture Attention-Deficit/Hyperactivity Disorder (ADHD): Diagnosis by Helen Farrell, MD is from the course Mild and Major Neurocognitive Disorders.

Which of the following is NOT a feature of attention-deficit/hyperactivity disorder (ADHD)?

Which of the following statements is TRUE regarding attention-deficit/hyperactivity disorder (ADHD)?