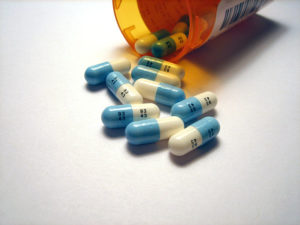 00:01 What about a special case? Antidepressants in pregnancy. 00:04 And so, if you're wondering because I didn't understand what that picture was for a minute when I first looked at it. 00:09 It is a baby in a blanket. 00:11 I thought it was a cabbage or a chili pepper for a minute. 00:14 No, it's actually a baby. 00:16 And I'm a dad. 00:17 So, I should know these things. 00:19 So, we know that depression in and of itself is a risk factor in pregnancy. 00:24 So, it particularly increases the risk of pre-term birth. 00:28 Now, antidepressant therapy is not necessarily proven to ameliorate that risk. 00:33 So, just giving a patient an antidepressant doesn't mean that they have a lower likelihood of giving a – of having preterm birth. 00:40 In addition, do understand that antidepressants are associated with multiple concerns during pregnancy. 00:45 A lot of these are controversial and haven't been completely established, but it seems that paroxetine does have a positive association with promoting congenital heart abnormalities and generally should be avoided during pregnancy. 00:57 That agent in particular. 01:00 All SSRIs taken during the second half of pregnancy have been associated with persistent pulmonary hypertension in the newborn. 01:06 That's a pretty firmly established link at this point as well. 01:10 But there are other questions as to whether SSRI used during pregnancy may be associated with a higher risk of autism later in childhood, whether it’s associated with other congenital defects. 01:23 These are more controversial and continue to be studied, but should be part of the balance in making a decision, a real patient-centered decision involving the patient as to whether to either continue or initiate antidepressant treatment during pregnancy. 01:39 So, the preferred agents during pregnancy might include drugs like citalopram, fluoxetine has been the most widely studied, and sertraline, but not preferred would be paroxetine. 01:49 And the bottom line is that for most patients with mild or moderate depression, I would recommend avoiding all the controversy, discontinuing antidepressants during pregnancy and you can always rely on something like talk therapy, which is not going to produce any side effects on the fetus. 02:08 That's for sure. 02:09 For patients with more severe depression, again, shared decision-making, practicing with the patient to talk about the potential risks and benefits, and I would usually recommend involving an OB/GYN specialist as well as a mental health care specialist in those cases as well. 02:28 A few more notes on antidepressants, odds and ends, but that may come up on your exam. 02:32 Remember that the serotonin norepinephrine reuptake inhibitors have an added benefit beyond depression, in that they can help with chronic pain. 02:40 Pain and depression, commonly comorbid conditions. 02:45 If a patient is really feeling tired, has difficulty initiating activity, think about a serotonin norepinephrine reuptake inhibitor (SNRI) or think about fluoxetine. 02:55 Those drugs are good. 02:56 How about a patient who can’t sleep at night, has a poor appetite? Mirtazapine can be a good option for those patients. 03:03 That one works well, particularly it seems like for older patients who commonly have those symptoms with their depression, mirtazapine can be a good option. 03:12 And because SSRIs, SNRIs both promote sexual side effects, sexual dysfunction, for patients who suffer with that condition, also more common in depression on its own right, those patients are more likely to have sexual dysfunction. 03:28 Bupropion doesn't add to those side effects. 03:33 So, what we talked about today was define depression, just in a little bit how – of how common it is and a lot about treatment. 03:39 So, don't forget the basics of exercise and don't forget that talk therapy can be highly effective because we know that a third of patients who take pharmacologic treatment for depression aren’t going to even respond. 03:53 And so, therefore, it might take some trial and error of trying out a couple of different drugs. 03:58 Usually, you can find something that works between those different modalities of treatment and make your patient feel better. 04:04 Thanks.

The lecture Antidepressants in Pregnancy by Charles Vega, MD is from the course Chronic Care.

Antenatal depression is most strongly associated with which of the following?

Which of the following medical treatments for antenatal depression has been shown in some studies to be associated with a small risk of congenital heart defects?

Author of lecture Antidepressants in Pregnancy