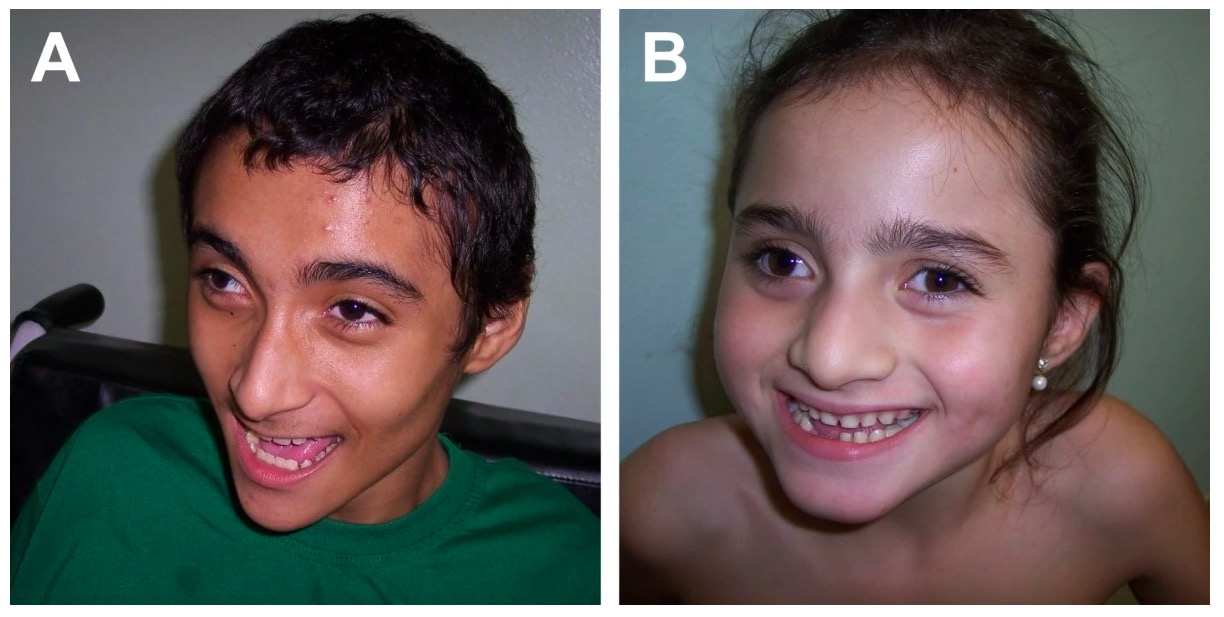 Prader-Willi Syndrome and Angelman Syndrome
Prader-Willi syndrome (PWS) and Angelman syndrome (AS) are both rare autosomal neurodevelopmental genetic disorders mapped to a specific region of chromosome 15 attributed to genomic imprinting. This means that the phenotype depends on the gender of the parent donating the genes. A paternally derived chromosome 15 with this deletion results in 15q11-13 paternal deletion syndrome, or PWS, whereas a maternally derived chromosome 15 with a similar deletion is associated with AS. Diagnosis is established with genetic testing. Management is mostly supportive and is focused on early intervention for developmental, neurologic, and physical abnormalities.
read more
Load more
Share
Ask Questions
Take Notes
Download Slides
Report Mistake
Comments
show all Show less
My Notes
show all Show less
Learning Material 2
show all Show less
Report mistake
Transcript
0 of 0

00:00 Angelman syndrome though is a completely different expression because it results from a microdeletion on the maternal chromosome. Let’s look at the schematic again. Both parents have both chromosomes. 00:14 However, on the maternal chromosome, we see that the Angelman syndrome region, the red region is expressed. 00:23 However, on the paternal chromosome, that region is imprinted, meaning that it is turned off and hypermethylated, so imprinting turned off. Now, if the maternal chromosome has a microdeletion that spans that region of chromosome 15, then she does not have the Angelman syndrome genes expressed or it does not have the Angelman gene syndrome expressed. Thus, the individual has no genes expressed in that Angelman syndrome region of chromosome 15 and they develop Angelman syndrome. 01:04 Angelman syndrome is an image on the right side of the screen here of what an individual looks like and here are a few more. Let’s take a look at some of the phenotypic features of Angelman. 01:19 Again, you’ll see they’re quite distinct from those that we see in Prader-Willi syndrome even though the deletion is in the same region of the gene. Angelman is one of the researchers that identified this gene. 01:35 But prior to his time, this syndrome was known as the happy puppet syndrome. It might help you remember the symptoms of Angelman because these children tend to smile and giggle a lot. 01:51 They’re ever so happy although fairly severely intellectually disabled. They also have pretty jerky movements as well as short stature and they often exhibit seizures. They don’t talk a whole lot. Often, there are developmental delays. The intellectual disabilities are much more severe than you see in Prader-Willi. 02:19 Another feature is that they often have fairly widely-spaced teeth. But in general for me in remembering it, we have the happy puppet as Angelman and then a serious need for food in Prader-Willi syndrome. 02:35 Those would be the overall big features to remember to keep these syndromes in mind. 02:41 Now, Prader-Willi and Angelman syndrome are mostly derived from these deletions in the Q arm of chromosome 15. Specifically, you can see the megabase numbers but that’s not really something so important for you to remember. I’m going to introduce a whole another concept here. 03:06 Some of the rest of these conditions come from a uniparental disomy. If you have, in this case, two maternal chromosomes that both have the Prader-Willi region hypermethylated, then they would have no Prader-Willi gene product and thus develop Prader-Willi syndrome. 03:31 Less of the time, we see Angelman syndrome derived from a paternal uniparental disomy. 03:42 We’ll look at how this happens in just a moment. Because both of those chromosomes are hypermethylated in the Angelman syndrome region, they would develop Angelman syndrome. 03:54 So what is uniparental disomy and how do we even get there? It sounds like a pretty strange term. 04:01 Let’s take a look at meiosis again. Here, we have two chromosomes. We’re going to go through their homologous pair. Let’s say we have nondisjunction during meiosis I. Then the next division, meiosis II, we see that each resulting oocyte is disomic, meaning it’s got both copies. In this case, we’ll go with the chromosome 15. The sperm comes along and fertilizes the egg. Now, it’s triploid. 04:35 But one thing that can happen that I mentioned in a previous lecture is you can have a trisomy rescue where the resulting zygote recognizes that it has three copies of this chromosome and kicks one out. 04:53 So now, we have a zygote that has two chromosomes but both of them are from maternal origin in this situation. This can happen in another way. Here, it’s called heterodisomy where we have them both from one parent. Now, let’s look at isodisomy. Let’s say meiosis I happens fine but meiosis II doesn’t happen quite the way it should. We have nondisjunction of the sister chromatids resulting in a disomic ovum which then could be fertilized by a sperm that either doesn’t have a chromosome because it had nondisjunction of its own or it could have a chromosome that is also rejected in trisomy rescue. Either way, we have two chromosomes that are from the same egg in this situation, right and so isodisomy. Heterodisomy, we have two different chromosomes. I think I misspoke. 06:08 Heterodisomy, we have two different chromosomes from the same parent. Isodisomy, we have two of exactly the same chromosome, so sister chromatids, exact copies of each other, isodisomy. 06:21 So disomy, two chromosomes, one parent; iso, both of them are exactly the same. 06:28 So again, although this is uncommon, I bring this up so that you can understand the concept of uniparental disomy and how it might manifest itself in certain genetic conditions. 06:41 As I bring this lecture to a close, I look forward to seeing you in the next lecture where we have some really exciting conditions looking at these sex chromosomes.

The lecture Angelman Syndrome by Georgina Cornwall, PhD is from the course Chromosomal Disorders.

What is the cause of Angelman syndrome?

Which of the following is NOT a phenotypic feature of Angelman syndrome?

Which of the following best describes the underlying genetic mechanism for Angelman syndrome?

Which of the following is the most common genetic phenomenon which leads to heterodisomy?

Which of the following best describes isodisomy?