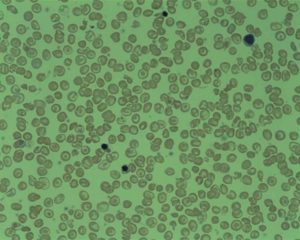 00:00 So there are 2 consequences. 00:02 Now, what we’ll do is we’ll go to the verbiage of things we already have discussed with you now. 00:07 There are two consequences of decreased alpha globin production. 00:10 What are they? Decreased hemoglobin synthesis, microcytic hypochromic anemia. 00:17 But we are not touching what component of hemoglobin? Good. The heme. 00:23 So what about your iron studies? Normal. 00:26 Only thing that is affected, the globin, the alpha. 00:30 The quantitative imbalance, right now, you pay attention here. 00:34 I’m going to walk you through three alleles once again. 00:37 If three alleles are missing, it’s not silent, it's not trait, But what is your body trying to do? Compensate. 00:43 Three alleles are missing. 00:47 My body is desperate, desperate, desperate as some kind of hemoglobin. 00:49 So what is it going to do? Oh, maybe it’s producing too much beta globin. 00:53 So an aggregate of four beta will then give you an -- you need to memorize this. 00:58 Keep going over and over and over. 01:01 In that table, I showed you HbH and here’s beta. 01:06 If by chance the body is trying to now form more gamma, you’ll have to memorize that this is hemoglobin Bart’s. 01:13 And these are all different types of hemoglobins. 01:15 So now, how would you confirm hemoglobin H disease? You confirm it hemoglobin electrophoresis. 01:22 You see that’s going to give you completely different pattern, isn't it? Because it’s not A, it’s not A2, and it’s definitely not F and it's really not even S. 01:31 So that will become important for you when you’re missing at least three, quantitative imbalance. 01:35 Now, these RBCs over a period of time, remember, this hemoglobin is rather bizarre in your RBC. 01:43 The RBC is now what? Looked at as being an invader. 01:47 It will then be cleared by the spleen and so therefore it only makes it worse. 01:50 In over a period of time, well you tell me, if the more number of RBCs that you destroy, what are you undergoing? What’s this process called? Normally in an adult, where are your myeloid cells being produced? In your bone marrow. 02:05 What bones? Sternum, good. 02:08 Ribs, good. 02:09 Humerus, yeah. 02:11 But what if that isn’t enough because there is chronic anemia? Then it’s called extramedullary hematopoiesis, isn't it? So you’re going to move away from those bones and maybe other bones are going to get affected. 02:23 Maybe the suture's in the head. 02:26 And if they are being called upon to recruit more RBCs, what do you think happens to the bone? The sutures get bigger and the frontal bone is then going to-- what’s that called clinically when it’s protruding forward? It’s called frontal bossing, right? Frontal bossing. 02:42 Good. Keep those things in mind and understand the concept of extramedullary hematopoiesis. 02:47 A lot more detailed but important. 02:48 My goodness, yes, so you can distinguish between silent and trait and three. 02:52 What about four? As I told you, intrauterine death.

Hemoglobin Barts is composed of which of the following globin chains?