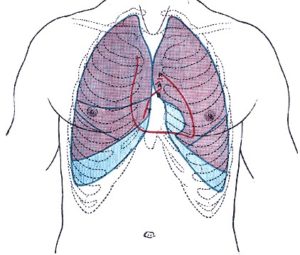 00:01 Now, we want to shift our attention to movements of the thoracic wall as well as the diaphragm. The way the thoracic wall is constructed, along with the diaphragm, these structures are well suited to change thoracic volume that is necessary for respiratory movements. The diaphragm is shown here. It is in its superior most location after normal expiration and one of the changes that has to occur for inspiration is to increase your thoracic volume. The diaphragm participates in this maneuver by contracting. It will then undergo a downward excursion, downward movement, thereby increasing the vertical dimension or volume of the chest. We also have two other movements that are produced by the osteology of our thoracic wall. And so, here, we're looking at the relevant osteology and we have two kinds of movements that can be described with the osteology. 01:18 If we take a look at the sternum and look at the xiphoid process and consider that is a pump handle and pull up and out on that pump handle, we will increase the anterior–posterior dimension of the thoracic cavity, also increasing the thoracic volume for inspiration. We can also describe a bucket handle movement to the ribcage, and if we look at the lateral aspects of the ribs on either side and put our hand under the inferior margin of a rib and lift up and out, that is a bucket handle type of movement that will increase the transverse diameter of the thoracic cavity, also assisting with inspiration. 02:05 And certainly, instead of using our hands to describe these movements of the pump handle or the bucket handle, we have muscles of the thoracic wall that will produce those given movements. For expiration, you want to decrease your thoracic volume collectively. So, the diaphragm relaxes, moves upwards, decreasing the vertical dimension, the ribs fall down and toward the back, thereby decreasing the transverse as well as the AP, anterior to posterior dimensions. Based on the architecture of the osteology, there are two apertures in the thoracic wall. The superior thoracic aperture is shown here. 02:58 This is termed the thoracic inlet. It is the smallest of the two in diameter, so it’s very restricted. But, it will allow the passage of structures between the neck and the thoracic cavity such as the esophagus, for example, or some of your blood vessels such as the common carotid arteries. They’re going to have a vertical course through this thoracic inlet. There are also some structures that are going to be distributed to the upper extremity. They are going to course outwards and up and over the thoracic inlet and the thoracic inlet is bounded by the first thoracic vertebra, the first pair of ribs, as well as the superior aspect of your manubrium. 03:50 The thoracic outlet is much wider than the thoracic inlet and it is bounded by T12, rib 12, the anterior most aspect of rib 11 and then the costal margin that we see here. And the costal margin is formed by the costal cartilages of ribs T7 through T10. And then the most anterior boundary of your thoracic outlet would be your xiphoid process and then we’d repeat that as we go around to the opposite side of the thoracic wall.

The lecture Movements – Thorax Muscles and Thoracic Wall by Craig Canby, PhD is from the course Abdominal Wall.

What are the boundaries of the thoracic outlet?