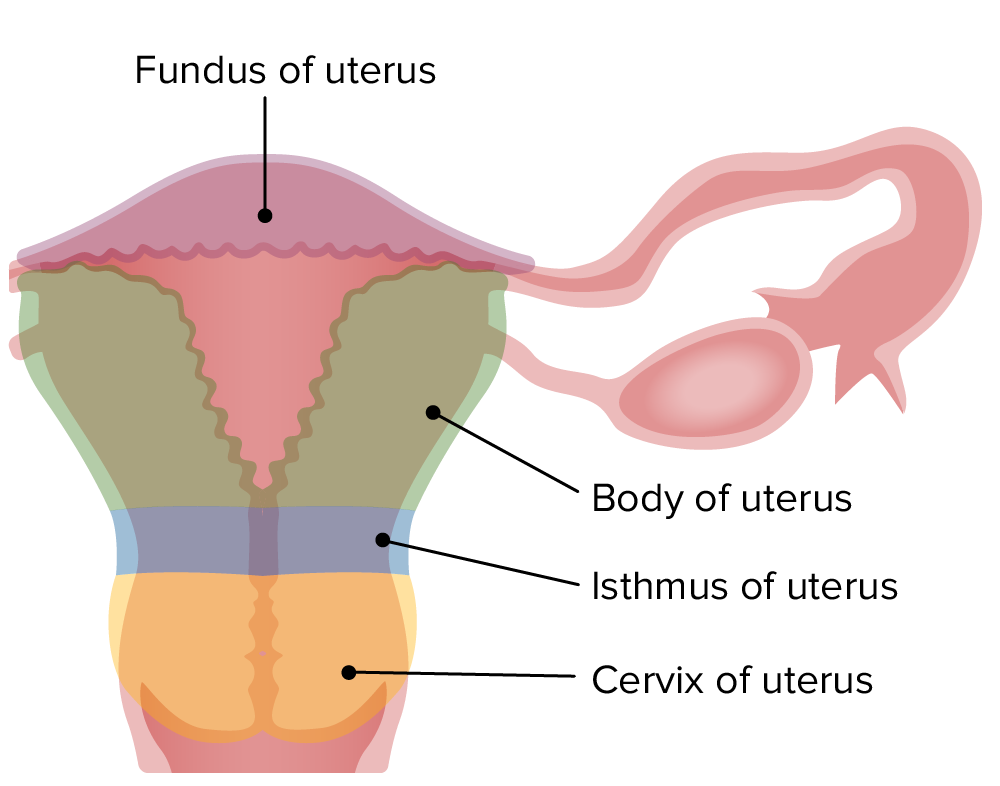 Uterus, Cervix, and Fallopian Tubes
The uterus, cervix, and fallopian tubes are part of the internal female reproductive system. The fallopian tubes receive an ovum after ovulation and help move it and/or a fertilized embryo toward the uterus via ciliated cells lining the tubes and peristaltic movements of its smooth muscle. The uterus has a thick wall made of smooth muscle (the myometrium) and an inner mucosal layer (the endometrium). The most inferior portion of the uterus is the cervix, which connects the uterine cavity to the vagina. Externally, the cervix is lined by stratified squamous cells; however, the cervical canal is lined by columnar epithelium. The transition point is known as the squamocolumnar junction, which is the site of most cervical cancers. These organs are supplied by the uterine and ovarian arteries and innervated by the autonomic nervous system.
read more
Load more
Share
Ask Questions
Take Notes
Download Slides
Report Mistake
Comments
show all Show less
My Notes
show all Show less
Learning Material 2
show all Show less
Report mistake
Transcript
0 of 0

00:01 So let's have a look in a bit more detail at the uterus and the uterine tubes. We can see in this diagram the uterus is being opened up and the uterine tubes and the ovaries have been opened to see their internal structure. If we look at the uterus, then we can see there is three layers to the uterus. 00:19 We have the perimetrium. We have the myometrium and the endometrium. 00:25 The perimetrium is this peritoneal layer, the serous layer on the outside of the uterus. That's a layer you touch if you were to press on the uterus. 00:36 You then have the myometrium, which is this muscular wall that's really in the middle of the uterus, this muscular wall made up of the smooth muscles. 00:45 And then we have the inner mucosal layer and that's the endometrium. 00:49 And this is the layer that typically sheds during the menstrual cycle. So we have those three layers. Three layers of the uterus. 00:59 If we look at the uterine tubes, then the uterine tubes connect the ovaries when we have paired ovaries: left one, right one And the uterine tubes connect these ovaries to the uterine cavity. And we have four parts to the uterine tubes. We have infundibulum. 01:16 The infundibulum is the most lateral extension of the uterine tubes. And these contain finger like projections called ovarian fimbriae. Here we see the infundibulum. And these ovarian fimbria come close and not physically attach to the ovary but they come very close to the ovary. One finger may in-fact attach to the ovary. But the rest of the fimbria are kind of surrounding the ovary and these collect the ovum once its been dispelled from the ovary. 01:47 Once the ovum has been dispelled and passes into the fimbria, it then passes down the ampulla. The ampulla is the widest part of the uterine tube and this is usually where the fertilization occurs. And then the fertilized gametes then will pass down through the uterine tube through a region called the isthmus. And then we have a uterine part that is actually a part of the uterine tube that is embedded within the uterus itself. 02:18 So we have various parts of a uterine tube. We have this nice dilated infundibulum and the various fimbriae. 02:27 We then have an ampulla. We have an isthmus and then we have a uterine part. 02:33 This is enters into the uterus, one runs within the wall of the uterus. 02:40 The uterus can assume different positions. 02:43 And the normal position is what’s known as the anteverted and anteflexed. 02:49 That is assumed this kind of orientation. 02:51 But you can have a whole series of different orientation based on the angle that the cervix takes at the vagina. So this angle here and this can be defined as being anteverted or retroverted. 03:07 So here we have what you consider to be an anteverted cervix; because, the cervix is pointing slightly anteriorly. 03:17 If this was to turn more in this direction, you will have a retroverted cervix in relation to the vagina. You can remember in relation to the vagina being "v" and inverted if it’s an anteverted or retroverted cervix. 03:34 Whether uterus is anteflexed or retroflexed determines on the position of the fundus. And here we can see that the direction of fundus is pointing whether its pointing quite anteriorly like here, where you say you have an anteflexed uterus or whether it is more retroflexed which we can see in this direction where the uterus is more rectoflexed. 03:59 Now this has important consideration, the position of the uterus. 04:03 It usually positions like this and it compress on the... rest on the top of the bladder. 04:10 If it's slightly more anteflexed, it can press on the bladder and mean the lady has to go to the toilet more often to carry out micturition on a more regular basis, as the bladder can't fill to what it is expected to. 04:25 And if it's more retroflexed, then you can see there is a potential for the uterine prolapse. 04:30 With increases in intra abdominal pressure, then that's going to push down on these pelvic organs. 04:36 And usually, the uterus will be pushed against the bladder here. 04:40 But if it assumed this more retroflexed and may be retroverted position then you can see there is the potential to increases of pressure to just push the uterus down through the vagina and you can have the uterine prolapse; being a insignificant, being a small prolapse as the cervix pushes more into the vagina or being a full prolapse when the cervix may well protrude out of the vaginal opening. 05:08 So the position of the uterus can be quite variable and it can have significant consequences.

Where does fertilization normally occur?

What is the most common position of the uterus?

Which is the most common position of the uterus in patients with uterine prolapse?