The Lateral Wall of the Ischioanal Fossa – Perineum and External Genitalia 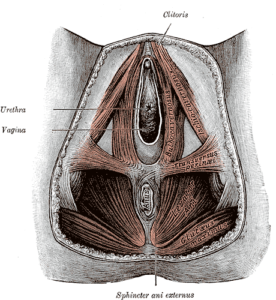 Perineum and External Genitalia
The perineum is a diamond shaped region situated inferior to the pelvic floor which separates it from the pelvic cavity. Several urinary, external genital and lower gastrointestinal structures are located within the perineum. Therefore the perineum plays an important role in bodily functions like defecation, micturition, procreation and parturition. This article will discuss the boundaries of the perineum, the perineal membrane, the Ischioanal fossa and its contents with their clinical relevance.
read more
Load more
Share
Ask Questions
Take Notes
Download Slides
Report Mistake
Comments
show all Show less
My Notes
show all Show less
Learning Material 2
show all Show less
Report mistake
Transcript
0 of 0

00:00 So let's just stay with the ischioanal fossa and look at its lateral wall for one moment. 00:07 So the ischioanal fossa and the lateral wall. Now, what I have got here as well is the branching of the internal iliac artery that we did in a previous lecture. Because now we need to remember the arrangement of the internal pudendal artery. 00:26 So what we have done is... We have got a image of a ischioanal fossa here. We have got the levator ani and we have got our obturator internus membrane. Well same on this side. 00:40 And if we turn to this diagram, we can imagine that the pelvis has been sectioned coronally down like this in this direction. So if we section coronally down and that's what we are looking at on this side. 00:55 So what have we done? Well, we have cut through the ischium which we can see here. 01:00 We have cut through the ischium which we can see here and we have also cut through an important blood vessel. 01:08 We have cut through this blood vessel here. Now if I just get rid of those previous marks we can see that we have cut through this blood vessel. 01:18 Now what did this blood vessel do? It left the pelvis via the greater sciatic foramen inferior to piriformis. 01:27 It left via the left greater sciatic foramen. 01:30 It then hooked around ischial spine sacrospinous ligament. It hooked around. And now as it hooked around the sacrospinous ligament remembering the coccygeus runs on the pelvic surface of the sacrospinous ligament. Its now going to be running under the pelvic floor. 01:58 So it left the pelvis, hooked around ischial spinous, sacrospinous ligament to now run within the perineum. 02:10 It found a way to run underneath the pelvic floor. 02:14 Now it's running alongside the ischiopubic ramus. 02:19 As we cut through it we can just make out the internal pudendal artery there. 02:26 Running alongside in this direction. 02:30 Obturator internus muscle in a structure known as the pudendal canal. 02:36 This is an important compartment within obturator internus fascia. 02:42 And it contains the pudendal nerve which is important in providing innervation to the perineum. 02:48 But importantly, looking at the arterial supply from the internal iliac, it's containing the internal pudendal artery and also the internal pudendal nerve. 03:01 It's running along the medial aspect of the ischiopubic ramus, running along the lateral wall of the ischioanal fossa. Coming from it are going to be the nerves and blood vessels that supply the inferior part of the anal canal. Supply this region down here. 03:24 So running through the ischioanal fossa we going to be having the inferior rectal nerve, artery and vein running through the ischioanal fossa to supply the inferior anal canal. 03:39 Okay, in future slides we'll carry on looking at the branching pattern of this internal pudendal artery. 03:48 But really that's all I want to say about the ischioanal fossa. It's a really important space. 03:53 The fact that we have this fat filled space lateral to the rectum allows for the faeces to expand into this space during defecation.

The lecture The Lateral Wall of the Ischioanal Fossa – Perineum and External Genitalia by James Pickering, PhD is from the course Pelvis.

In which fascia is the pudendal canal located?

Which artery passes through the ischioanal fossa?

Which vessel hooks around the sacrospinous ligament?