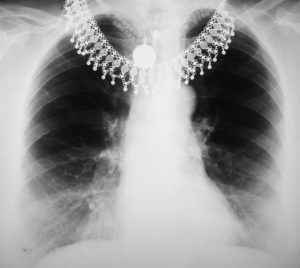 00:00 The diaphragm may also be appreciated with simple imaging, for example, a radiograph. 00:06 And again, we’ll be able to appreciate the fact that the right dome of the diaphragm does sit at a higher level than the left dome. 00:18 There is a little bit of interpretation work that one kind of has to master in order to understand where some of these structures may lie, but the right dome of the diaphragm is right along this margin here. The left dome is seen here and the left dome again is sitting at a lower level than the right dome. 00:44 Now, there can be situations that may cause either the right hemidiaphragm or the right dome to be much higher than normal. Similarly, there could be an effect just on the left side where the left hemidiaphragm or the left dome becomes situated at a much higher level. 01:08 And some of the causes of having an elevated hemidiaphragm, keep in mind that this radiograph is the one we saw before, it is normal. But, if you had a decreased lung volume, for example, if you had a pneumothorax within the right pleural cavity, the right lung would collapse, thereby allowing the right hemidiaphragm to ascend at a much higher level. 01:33 You could have phrenic nerve palsy either on the right phrenic nerve or on the left phrenic nerve. A common entity or a common ideology here for phrenic nerve palsy would be lung cancer that’s invading and involving the phrenic nerve. So, if it’s the right phrenic nerve, you would have an elevated right hemidiaphragm. If it’s involving the left phrenic nerve, it would be the left hemidiaphragm that would be elevated. 02:01 A contralateral stroke to the motor neurones that are conveyed throughout the phrenic nerve, if it’s on the left side, that would cause contralateral elevation of the right hemidiaphragm. 02:17 You could have an abdominal tumour and so, you could have this growing tumour pushing upwards against the diaphragm and causing an elevation. And there are some other causes as well. 02:30 The diaphragm, as mentioned earlier, does have a central tendon. And we see the central tendon in this area here. And then we see the striated muscle fibres that make up the diaphragm that are more peripherally located. And they extend all the way along the movement of the cursor here. 02:50 We can divide these muscular parts into a sternal part of the diaphragm. We also have a more extensive part of the diaphragm with attachments to the ribs. And this more extensive part of the diaphragm would be the costal part. And then we also have lumbar components here to the diaphragm. And we see those contributions in through here. 03:23 If we take a look on this side, we have some more geometry anatomically. And we see the same geometric configuration on the opposite side of the diaphragm. 03:38 This is the lumbocostal triangle, also referred to as Bochdalek's triangle. The diaphragm doesn’t develop appropriately during foetal life, embryonic life. There can be a defect and it’s usually on the left side in the area of Bochdalek's triangle. And this defect would allow herniation of abdominal contents. And again, it’s usually on the left up into the thoracic cavity where the lung is situated. And that would then result in developmental defects with the lung.

The lecture Radiograph – Thoracic Diaphragm by Craig Canby, PhD is from the course Abdominal Wall.

What parts of the diaphragm border Bochdalek's triangle?

An elevated left hemidiaphragm is seen on a chest X-ray. What could be the cause?