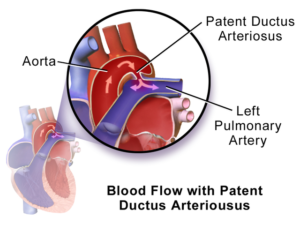 Patent Ductus Arteriosus (PDA) — Treatment and Surgery
Patent ductus arteriosus is a common congenital heart disease that can bepresent isolated but is usually present with other co-existing congenital heart anomalies. Patients usually have a previous history of hypoxia, or premature baby or have a maternal history of rubella infection. Echocardiography is the diagnostic modality of choice for the confirmation of the diagnosis. The administration of indomethacin can stimulate the closure of the patent ductus arteriosus. Surgical treatment should be reserved for highly symptomatic patients with a large patent ductus arteriosus.
read more
Load more
Share
Ask Questions
Take Notes
Download Slides
Report Mistake
Comments
show all Show less
My Notes
show all Show less
Learning Material 3
show all Show less
Report mistake
Transcript
0 of 0

00:00 stenosis leading into the pulmonary circulation. Now then, what about patent ductus arteriosus? We saw previously that that normally closes roundabout birth, just subsequent to birth and it may, therefore, happen to still remains open. Again, this may be asymptomatic, maybe no serious symptoms as a result of it. But equally, it could be associated with hypoxia during the birth process. So the lack of oxygen may have disturbed the normal closure, and therefore, it remains open longer than it should do. If this condition persists, it may result in pulmonary hypertension later in life as a young adult or even as an older adult. 00:42 Under some circumstances, as the arrow in the diagram shows, then there may be a reversal of blood flow. So instead of flowing up through the ductus arteriosus, it’s flowing down from the aorta. Of course, that can cause lower body cyanosis because the blood would normally flow down the aorta descending down the body, and then supplying the lower part of the body. If there’s an interruption of this kind where oxygenated blood is not making out all the way down to the lower part of the body, then you may find that the lower part of the body shows cyanosis. Perhaps, the femoral pulses may be less strong than they are normally as a consequence. Coarctation of the aorta means a narrowing of the aorta.

The lecture Patent Ductus Arteriosus – Blood Vessel and Heart Abnormalities by John McLachlan, PhD is from the course System-Specific Embryology with John McLachlan.