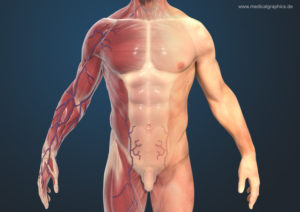 Anatomy of the Torso: Thoracic and Abdominal Muscles
The complexity of the musculoskeletal system is often a big issue for medical students. To learn about muscles effectively, a clear and logical grouping into systems with unique structures is needed. In this article, in addition to detailed descriptions of the origin, insertion, action and innervation, medical students will obtain an overview in tabular form for visualization of the muscle groups. Attention: Due to conflicting information in primary literature about the muscles' origins and insertions, it is advisable to always consult the latest copies for studying.
read more
Load more
Share
Ask Questions
Take Notes
Download Slides
Report Mistake
Comments
show all Show less
My Notes
show all Show less
Learning Material 2
show all Show less
Report mistake
Transcript
0 of 0

The lecture Muscles – Thorax Muscles and Thoracic Wall by Craig Canby, PhD is from the course Abdominal Wall.

Which muscle inserts on the coracoid process?

Which intrinsic muscle of the thorax spans more than one intercostal space as it attaches to a rib above and a rib below?

Which muscle performs adduction of the arm?

What is the nerve supply of the pectoralis minor?

What is the smallest extrinsic muscle?

What is the main source of innervation to the intrinsic muscles?

Besides the pectoralis major and pectoralis minor, what is the complete set of extrinsic muscles of the thorax?

You did an amazing hard work to creat this great lecture. You could involve the most important information in only 14 minutes and the same time the lecture is very simple and interesting. Thank you very much professor Craig Canby

You did an amazing hard work to creat this great lecture. You could involve the most important information in only 14 minutes and the same time the lecture is very simple and interesting. Thank you very much professor Craig Canby