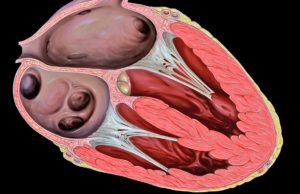 Chambers and Great Vessels of the Heart
The heart performs the function of receiving and pumping blood. In order to perform this function, it has four compartments, or chambers – the two atria and the two ventricles. The left atrium receives oxygen-rich blood from the pulmonary circulation and drains it into the left ventricle, which then pumps it to the rest of the body. The right atrium receives oxygen-poor blood from the systemic circulation and drains it into the right ventricle, which then sends it to the pulmonary circulation for oxygenation.
read more
Load more
Share
Ask Questions
Take Notes
Download Slides
Report Mistake
Comments
show all Show less
My Notes
show all Show less
Learning Material 2
show all Show less
Report mistake
Transcript
0 of 0

00:00 All right. Let's now take a look at the individual chambers. We want to understand the internal features of the individual chambers. So our first visit or first stop will be with the right atrium. 00:14 So let's take a look at the various features of its internal anatomy. So here we're looking at the internal aspect of the right atrium. First thing that you'll note is a portion of the right atrial wall internally has some roughened ridges. And these are muscular ridges and they make what is known as pectinate muscles. However, we also have an area to the wall that's smooth. The smooth area of the wall is called the sinus venarum. It is derived developmentally from the sinus venosus and it is a vascular structure and, when it gets incorporated into the wall of the right atrium, that vascular structure was smooth therefore its contribution to the formation of the right atrial wall will also be smooth. Pectinate muscles are being derived from the primitive atrium, which is muscular to begin with. 01:17 We also have the interatrial septum over here. Within the interatrial septum, we have this oval depression. This is referred to as the fossa ovalis. Understanding the fossa ovalis is important developmentally. In the embryo, the interatrial septum at the fossa ovalis location wasn't closed off. Instead, there was an opening between the right atrium into the left atrium through the interatrial septum. That opening was referred to or is called the foramen ovale. And the reason we have this shunt during development is that you do not need to send blood through the pulmonary circulation because the blood is being oxygenated not by the lungs but by the placental circulation. So blood gets diverted over into the left side of the heart from the right atrium into the left atrium through the foramen ovale. 02:19 Then, after birth what will happen is the valve of the foramen ovale will get slapped shut against the interatrial septum from the left atrial side and fuse and then create this fossa ovalis. 02:33 We also have the openings to the inferior vena cava, superior vena cava. And then we have the ostium or opening of the coronary sinus, which is bringing the majority of venous blood from the heart itself back to the right atrium. And the last structure to identify here is the crista terminalis. This is a structure that separates the pectinate musculature from the sinus venarum. 03:08 All right. Our next stop is the left atrium. And here we have an internal view of the left atrium. And if we take a look, most of its surface is going to be smooth. And it's receiving the four pulmonary veins at these locations. The reason that the wall of the left atrium is smooth is it incorporates during development the primitive pulmonary veins. 03:32 And again, since those are vascular structures, the contribution that these vascular structures make to the wall is to provide for a smooth internal wall. There is a portion of the left atrium that is derived from the primitive atrium, hence it does has pectinate muscles. 03:47 And those pectinate muscles are going to be within the auricle, which we see here of the left atrium. We can also see this ridge, this semilunar ridge right in through here. This represents the valves of the foramen ovale. And the remnant of the foramen ovale we saw on the right atrium within the interatrial wall, the fossa ovalis. But again in the foetal circulation, the fossa ovalis was open. It was a foramen and it was called the foramen ovale. Hence the valve that we see here that is fused to this area is the valve of the foramen ovale. 04:27 The right ventricular view is seen here. And, again, our focus is on its internal anatomy. 04:33 And if we look at the internal wall, again we can see some muscular ridges. So you may think at first that these muscular ridges are more robust, more prominent than they are in the atria, particularly the right atrium. So maybe pectinate muscles would be used here. 04:51 But instead anatomists decided that they deserved their own unique naming system. And so the terminology for these muscular ridges in the right atrium is trabeculae carneae. Trabeculae, or trabecula for the singular, means beam. Carneae means flesh. So these are fleshy beams within the right ventricle. 05:19 We also have papillary muscles within the right ventricle. And attached to the papillary muscles are tendinous chords referred to as chordae tendineae. And then they will attach to the cusps of the valve that we see here. 05:40 Also note the thickness of the right ventricular wall, certainly much thicker than the right atrium. However, we'll want to contrast that to the thickness of the left ventricle, which is now in your view. 05:56 Here we see the internal anatomy of the left ventricle. It really isn't any different than the right ventricle. We have the trabeculae carneae again and we'll have papillary muscles with their chordae tendineae attached to the margins of the cusps between the left atrium and the left ventricle. Now take a look here. You can see the thickness of the left ventricle. 06:23 We'll go back to the previous slide. Here is the thickness of the right ventricle and, if we go back to the left ventricle, I think you can appreciate the fact that the thickness of the left ventricle is much greater than the right. And this is due to the greater pressures that must be generated to force blood into a high-resistance bed that we find in the systemic circulation.

The lecture Individual Chambers – Heart (Cor) by Craig Canby, PhD is from the course Thoracic Viscera.

Which developmental structure(s) are pectinate muscles derived from?

Which developmental structure is the sinus venarum derived from?

Which structures does the foramen ovale lie between?

Which statement about the wall thickness of the compartments of the heart is correct?

Where are the trabeculae carneae found?

Thank you very much. Very simple and informative. You do a great job

as stated below- very happy with the delivery of lecture

Thank you very much. Very simple and informative. You do a great job

as stated below- very happy with the delivery of lecture