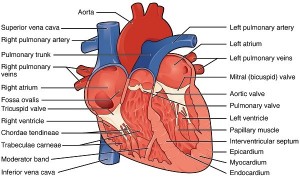 Anatomy & Pathology of the Heart and Components of the Cardiovascular System
The heart is a hollow muscular organ that contracts approx. 100,000 times a day and pumps approx. five liters of blood into the circulation every minute. It is not only characterized by the unique features of muscle tissue specialized to meet the constant physical demands of pumping blood, but also by muscle cells that send spontaneous rhythmic electrical impulses to stimulate contraction. This article gives an overview of the structure of the heart wall and of cardiac muscle tissue.
read more 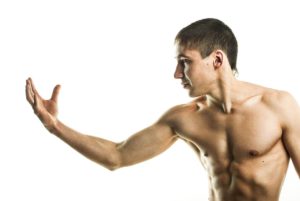 Muscle Physiology – The Capability to Produce Force
Movement is a sign of life. It enables voluntary locomotion, reflexive reactions for purposes of protection (such as in the event of flight or a fall) as well as the complex functioning of our metabolism. The many different tasks that are accomplished by the muscle physiology give a glimpse into the complexity of this thematic area. In the following contribution you will learn – after a brief review of the relevant muscle structures – an exact overview of the physiologic sequence of forms, the sliding filament theory and the electro-physiologic and energetic processes during a contraction. Furthermore, the topic of muscle strength, with regards to bodily adjustment to exertion and relaxation, will be broached.
read more
Load more
Share
Ask Questions
Take Notes
Download Slides
Report Mistake
Comments
show all Show less
My Notes
show all Show less
Learning Material 2
show all Show less
Report mistake
Transcript
0 of 0

00:00 in the wrong direction during contraction of the ventricle. Now let’s move on and look at the structure of cardiac muscle. Cardiac muscle is a specialized piece of tissue, so important to the function of the heart. You need to be aware of its difference between skeletal muscle and smooth muscle. Well, cardiac muscle does have some characteristic features. Firstly, it has got a central nucleus, similar to smooth muscle, but skeletal muscle, you may recall, has got many, many peripheral nuclei. Cardiac muscle has also got striations just like skeletal muscle, but unlike smooth muscle that doesn’t have striations. 00:51 And cardiac muscle has structures called intercalated discs, which if you look at the diagram on the left-hand side, it explains what these intercalated discs actually are, and what their functional role is. They are of two sorts of junctional complex. One is called the fascia adherens. That’s an adherent junction. It holds muscle cells end to end in our cardiac muscle cells, our small cells, relative to skeletal muscle cells. But unlike skeletal muscle cells that are arranged in parallel and their contraction is dissipated onto a tendon to bring about movement at a joint, cardiac muscle cells aligned end to end and joined very strongly to each other via this adherent junctions. And the other top of component in these intercalated discs are gap junctions. These gap junctions allow the transmission of ions and different messengers from one cell to the next. 02:00 And in so doing, contraction could be initiated at one part of the cardiac muscle and move all the way along through other cardiac muscles in a certain sequence. And that brings about the sequential pumping of the myocardium. You see here in the diagram, these junctional complexes are between two separate cardiac muscle cells and they tend to be a little bit disjointed or irregularly arranged between the two cardiac muscle cells. That increases the surface area of this contact from one muscle cell to another, and therefore, further enhances a very strong bonding between these cells. The gap junctions tend to be isolated on their own as part of this junctional complex, whereas, the adherent junctions are also in certain locations. So, there’s no confusion between the two, in terms of their structure, and therefore, in terms of their function. In the previous section I showed you or previous slide and explained the histological features of cardiac muscle, you are looking at cardiac muscle sectioned longitudinally. Here, on the right-hand side of the slide, you can see two sections taken through cardiac muscle, transversely sectioned. On the far right hand section is a section taken through the myocardium of the ventricle. And on the left hand side, the section is being taken through the myocardium of the atrium. And if you look very carefully at those two sections, I hope you’ll notice, generally, that the thickness of the cardiac muscle fibres in the ventricle are bigger than the thickness of the cardiac muscles in the atrium. And that’s because, if you recall, the atria are only pumping blood into the left or right ventricle. The ventricles, on the other hand, are pumping blood under pressure into the lungs or into the systemic circulation through the aorta. Therefore, the pump needed has to be a lot stronger. So the cardiac muscle fibres in the ventricle are going to be stronger, larger, wider because they have to have that stronger pumping action. So you can see subtle differences in the size of cardiac muscles when you compare the atria with the ventricle. 04:45 And just in summary, it just refers to the strength of the pump you need to pump the blood from those two chambers. Well, let’s look at the conducting system of the heart.

The lecture Cardiac Muscle by Geoffrey Meyer, PhD is from the course Cardiovascular Histology.

Which of the following properties is common to both skeletal and cardiac muscles?