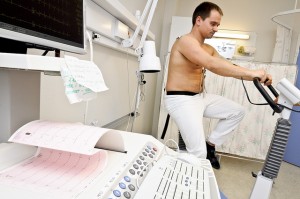 Physiology of the Heart
Our heart is a powerful pump that performs its duty around the clock. It pumps 7,000l of blood through the body each day. This is possible due to, among other things, its autonomous regulation and unique musculature. This article covers the aspects of cardiac physiology that are relevant in medical exams and creates a basic understanding of the mechanics of the heart.
read more
Load more
Share
Ask Questions
Take Notes
Download Slides
Report Mistake
Comments
show all Show less
My Notes
show all Show less
Learning Material 2
show all Show less
Report mistake
Transcript
0 of 0

00:00 Here we're looking at the heart's conduction system. The heart is a remarkable organ in that it controls its own rhythmicity. And then it only utilises the autonomic nervous system and humoral factors to increase the heart rate, perhaps increase the force of contraction, or to decrease the heart rate or to decrease the force of contraction. 00:29 But the heart's conduction system isn't made up of nervous tissue. The heart's own conduction system is composed of modified cardiac muscle cells that have a different function than to be contractile. They need to be rhythmitic. And the first collection of these modified cardiac muscle cells is in an area here within the right atrium about where the superior vena cava enters. And at this level we see the sinoatrial node, or the SA node. 01:12 This has a natural firing rate of 60 to 70 times per minute. And so this thing if it's not modified would have a heart rate then that would be equivalent to 70 to 80 beats per minute. 01:29 Action potentials then that are generated from the SA node will get conducted through the right and left atrial walls. And then those action potentials will all converge onto another specialised nidus of cardiac muscle cells between the right atrium and the ventricles. This is the atrioventricular node or the AV node. And then from the AV node we see here, action potentials will then enter the next pathway. And this is called the common atrioventricular bundle or the common AV bundle, also known by the eponym His. And then that bundle will divide into a right bundle branch running along the right side of the interventricular septum that we see here and supply the right ventricle. And then the left bundle branch, which is the larger bundle branch, will travel on the left ventricular side of the septum and supply the left ventricle. 02:37 Koch's triangle is yet another geometric configuration that we see in anatomy. Koch's triangle is useful in identifying the atrioventricular node or the AV node. In certain conditions, a surgeon may have to go in and ablate some of the nodal activity to adjust rhythmicity. 02:59 And in order to ablate portions of the AV node, they need to know exactly where the AV node is located. So Koch's triangle helps to identify the location of the AV node. 03:12 There are three landmarks that help to define Koch's triangle. The first one is right along here. It's a continuation of the valve of the inferior vena cava which we see here. 03:28 If we follow that up along here, we can kind of see an elevation underneath the endocardium. 03:35 And that elevation that we see at that area is Todaro's tendon. We also have the opening of the coronary sinus here that serves as another landmark. And then we have the septal cusp here via our right atrioventricular valve. And if we go along that septal-cusp boundary, that will help define another portion of Koch's triangle. So the AV node is located within this triangular area. And again, if a patient is having atrial fibrillation, portions of that can be ablated to adjust the rhythmicity to normal. 04:22 That now brings us to our summary. Here are the take-home messages from this lecture. Please be mindful of the following: The heart resides in the pericardial cavity. It's enclosed by this visceral parietal pericardial layers and the outermost component here is the fibrous pericardium. 04:45 Sulci contain fat and harbour the coronary vessels as they separate the atria from the ventricles and the ventricles from one another. 04:57 The base of the heart is the area of the atria that receives venous drainage from the great veins whereas the apex is directed in an opposite manner and is formed by the left ventricle. 05:10 Features of the right atrium include openings for the superior vena cava, inferior vena cava, coronary sinus, the crista terminalis, fossa ovalis, Koch's triangle and is well endowed with pectinate muscles. 05:24 The left atrium features the fused valve of the fossa ovalis, openings of the pulmonary veins and lacks pectinate muscles except in its auricle. 05:37 Both ventricles feature papillary muscles and chordae tendineae. 05:43 The coronary circulation in most individuals is right dominant though left dominant and balanced arterial patterns do exist, but less frequently. 05:55 The coronary sinus is the principal conduit via which venous blood is drained from the heart into the right atrium. 06:05 And conduction is composed of cardiac muscle cells that are modified for electrical activity to control the heart's own rhythmicity. 06:14 Thank you for joining me on this incredible journey through the heart.

What is the pacemaker of the heart?

What is the natural firing rate of the SA node?

What is the correct order of impulses traveling to the conduction apparatus of the heart?

The ablation of Koch’s triangle can be an effective treatment for which of the following conditions?

Which coronary artery travels with the great cardiac vein?

Concise and aimed explanation contributes to an interactive lecture which makes learning enjoyable.

I liked the whole Cardiac Conduction System. Thank you Professor for the lecture. Really helpful and easy to follow.

Concise and aimed explanation contributes to an interactive lecture which makes learning enjoyable.

I liked the whole Cardiac Conduction System. Thank you Professor for the lecture. Really helpful and easy to follow.