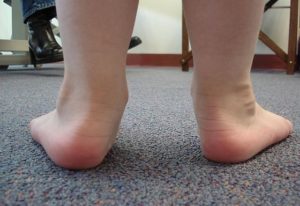 Malformations During Embryonic and Fetal Development
Congenital malformations are developmental disorders that arise before birth during the embryonic (2nd - 8th week of development) or fetal period (9th - 38th week of development) (from the Latin congenitus = "born with"). The cause may be genetic or contingent on external influences. The rate of incidence for children born alive is approximately 3%. Toxic agents that may cause embryonic damage and malformations are called teratogens, and the study of the cause and characteristics of inherent malformations is called teratology (Gr. teras = monstrosity, marvel). Infections such as rubella, medications like thalidomide, drugs such as alcohol and tobacco, or radiation are all teratogens.
read more
Load more
Share
Ask Questions
Take Notes
Download Slides
Report Mistake
Comments
show all Show less
My Notes
show all Show less
Learning Material 3
show all Show less
Report mistake
Transcript
0 of 0

00:01 Hello, and welcome to this lecture on the abnormalities of the heart and the great blood vessels. 00:06 I think it’s important, before you review this lecture, that you’re familiar with the normal development of the heart which, as we saw in that lecture, is actually quite complicated, and we will not be repeating all of that in this one. In fact, we’re going to take a different strategy in this one altogether. What we’re going to do is to explore the major defects, so ventricular septal defect, atrial septal defect, tetralogy of fallot, patent ductus arteriosus, and coarctation of the aorta. First of all, I want to present it to you with a clinical scenario. So let’s imagine that you’re dealing with a six-week-old male baby, and the baby is presented with poor weight gain. So it’s slow to gain weight, it’s slow at feeding, has persistent infections, particularly chest infections, a heart murmur audible in the stethoscope, and some signs of cyanosis. Now, cyanosis is a bluish discoloration of the skin and mucus membranes. As a doctor, you’d have to think what diagnosis is relevant here. Because of this, we’ll be looking, first of all, at the kinds of things that might happen as a result of a particular heart defect and you will encounter this. 01:19 They are relatively common. Now, what I’ve just listed are a series of signs. Clinical signs are things that you can spot objectively. That’s contrasted with symptoms which are what the patient can report to you. Obviously in the case of a newborn baby, they will not be reporting any symptoms, so you’ll be looking for signs only. 01:41 How common are heart defects? There is a Europe-wide reporting system which monitors birth defects, and that reports about 80 babies per 10,000 live births have a heart abnormality and that makes it one of the most common kinds of birth defects. In fact, it represents about 40% of all live-born infants with a congenital defect and that only counts babies who are actually born alive. A higher proportion of babies still is born dead as a result of the heart defect. Therefore, that would push the proportion a little higher. So, we’ve seen how common they are. How do they divide up in terms of causes? We don’t know very much about this. We know that 4% are caused by single gene mutations, and about 6% are caused by major chromosomal abnormalities, where a chromosome might be copied or missing altogether. 02:38 About 5% are caused by exposure to teratogens. Teratogens are substances which can cause birth defects. The rest of unknown causes are some combination of the previous kinds of causes that have led to the heart defect overall. So, what you can see is that there’s still much to learn about heart defects and their causes. Now, of the different types of what we named, we can ask how common they are relative to each other. Ventricular septal defect, VSD, is the most common one, and represents between 25% and 50% of heart defects. 03:19 Atrial septal defect, ASD, represents about 10%, the tetralogy of fallot, probably about 10% as well, patent ductus arteriosus, 25%; coarctation of the aorta, about 10%. Now, if you go to arithmetic, you’ve probably already spotted that those add up to more than 100%. And that’s because more than one defect can be present at any one time. Now, let’s quite look at the fetal circulation before birth. As the blood flows into the heart and to the right atrium, the foramen ovale allows some blood to pass into the left atrium. Thereby, short-circuiting the circulation to the lungs. In addition, the ductus arteriosus is still open, and that allows blood to flow, again, short-circuiting the pulmonary circulation into the descending arc of the aorta. So, ductus arteriosus is cutting off the lungs and normally, both the foramen ovale and the ductus arteriosus will close at birth. As a result of cessation of blood flow through the umbilical circulation, this means that the pressure in the right atrium drops and as fluid drains from the baby’s lungs as the baby is born, so there’s an increase in pressure in the lungs and an increase in pressure in the left atrium. 04:47 As a result, the foramen ovale closes under the pressure rise in the left atrium. 04:54 The patent ductus arteriosus will also begin to close, first of all, as a reflex, and then gradually diminishing in size over the subsequent few days. So the foramen ovale has closed, and the ductus arteriosus is closed.