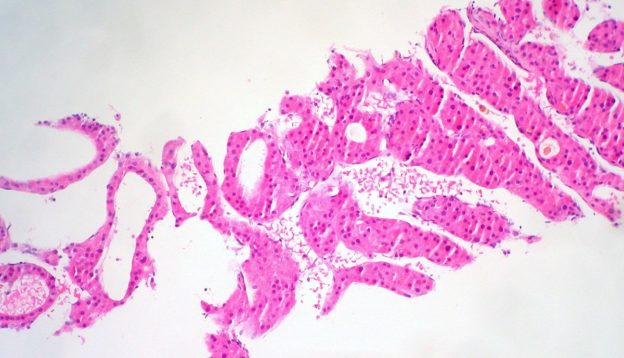 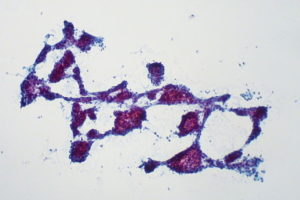 Hepatocellular carcinoma makes up about 5.4% of overall incidence for all cancers. It is particularly prominent among patients who have had hepatitis B infection.

Another risk factor that may contribute to the development of hepatocellular carcinoma is exposure to aflatoxin, which is common in endemic areas.

Another risk factor for this condition is chronic exposure to alcohol and aflatoxin, a toxin produced by Aspergillus that contaminates staple food items. The ability of aflatoxin to contribute to hepatocellular carcinoma development increases when there is a coexisting hepatitis B or C infection.

Large-cell change: Cells near the septa or the portal tracts are most commonly affected. They appear larger than normal hepatocytes with many large and moderately pleomorphic nuclei, with a normal nuclear-cytoplasmic ratio.

Small-cell change (with mild nuclear hyperchromasia and pleomorphism): This change usually results in the formation of small expansile nodules in a single lobule in the liver parenchyma.

Low-grade dysplastic nodules (clonal nodules that do not have cytologic or architectural atypia and may be neoplastic). Blood supply is a combination of hepatic arterial and portal venous blood.

Grossly, hepatocellular carcinoma may appear either as a large unifocal mass, multifocal nodules with varying sizes, or diffuse infiltrations in the entire liver. Intrahepatic metastasis is common when tumors become 3 cm in size.

As it usually occurs with cirrhosis and chronic hepatic viral infection in predisposed individuals, the manifestations of hepatocellular carcinoma may be masked by other general signs and symptoms. Nonspecific manifestations include abdominal pain, malaise, fatigue, weight loss, hepatomegaly, and abdominal fullness.

Although not definitive, laboratory exams may help characterize the lesion. Elevated serum α-fetoprotein is expected in approximately 50% of cases. Imaging studies such as ultrasonography, computed tomography, and magnetic resonance imaging may help visualize the outlines and other features of the lesion, and describe the degree of arterialization of the tumors.

Transcatheter arterial chemoembolization, low-dose brachytherapy, and chemotherapy can be used to manage the patient’s condition. Surgical intervention is recommended in cases where chemotherapy and radiotherapy are ineffective. Resection of the tumor by partial hepatectomy may also be considered. 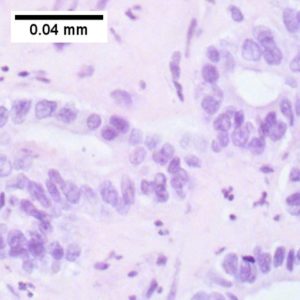 Cholangiocarcinoma is the malignancy that arises from the bile ducts and ends at the ampulla of Vater. Intrahepatic tumors are less common (see image).

Cholangiocarcinoma, in general, is the second most common primary malignancy in the liver. It arises from the epithelium lining the biliary duct and can either be extra- or intrahepatic. Intrahepatic cholangiocarcinoma makes up about 20% of all cases of liver cancer.

Since the occurrences of risk factors for the disease vary from one population to another, the distribution of the disease varies widely. Chronic fluke infection, which is endemic in certain Asian regions, contributes to the development of the disease. It affects mostly men and women between the ages of 60 and 70 years.

Cholangiocarcinoma usually begins with a chronic bout of inflammation or cholestasis. In the presence of genetic predisposition, mutations in certain oncogenes and other genes that encode bile salt transporters trigger the pathogenesis of cholangiocarcinoma. Mutations in the following genes may be implicated in the disease process:

The tumors grow slowly, infiltrating the walls of the biliary duct and, sometimes, extending to the liver portal vasculature, regional lymph nodes, and pancreatic duodenal chains.

Manifestations of intrahepatic cholangiocarcinoma are somewhat similar to and more prominent than that of hepatocellular carcinoma. Progressive jaundice, weakness, and weight loss may become apparent in advanced stages.

Cholangiocarcinomas are usually mucus-producing adenocarcinomas. They can be well to moderately differentiated and have well-delineated glandular/tubular structures that are outlined by malignant cells.

Hepatoblastomas are very common among children < 3 years of age.

Hepatoblastomas are described as having a constantly activated WNT and β-catenin signaling pathways and APC gene mutations. The disorder can occur in patients with familial adenomatous polyposis. Mutations in the TGF-β pathway regulating gene, FOXG1, may also be implicated.

There are two known variants:

The only treatment available is surgical removal of the tumor.

Hemangiosarcoma is the most common mesenchymal neoplasm in the liver, despite its rare occurrence.

The most commonly known cause for the pathogenesis of hemangiosarcoma is exposure to thorium dioxide. Exposure to insecticides and ingestion of alcohol contaminated with arsenic are also significant risk factors. Previous psoriasis treatments containing potassium arsenite have also been found to cause hemangiosarcoma. Workers who are exposed to vinyl chloride monomer are also at risk of developing the lesion.

Metabolites from known substances are found to be highly reactive and able to form DNA adducts and G to A transitions in KRAS and TP53 genes.

Hemangiosarcomas are known for their blood-filled cysts. Although not contained in a capsule, they are well circumscribed and can bulge beneath the capsule, lining the entire liver.

Precursor lesions include enlargement of the cells lining the sinusoids with hyperchromatic nuclei in poorly defined loci in the entirety of the liver. Soon, the rapidly developing lesions become supported by collagen, hence their well-defined borders.

Other Primary Malignant Tumors of the Liver

Other rare tumors in the liver that can progress to cancerous growths include the following:

The double blood supply of the liver puts it at high risk for metastasis from growths arising in other locations of the body. The porous nature of the sinusoids also allows for easy penetration of malignant cells into the liver tissue.

Metastasis in the liver commonly arises from growths found in the stomach, pancreas, colon, lungs, and breasts. Usually, symptoms are obscured by those manifested by the primary tumors. Signs and symptoms usually include malaise, abdominal pain, weight loss, hepatomegaly, and jaundice.

Mutations in the TCF1 gene, which encodes for hepatocyte nuclear factor 1α (HNF-1α), and alterations in the WNT pathway have been implicated in the pathogenesis of hepatocellular adenoma. In the latter, β-catenin activation puts many patients at risk for malignant development of the lesions. Finally, hepatocellular adenoma can also occur as a result of chronic inflammatory processes.

The morphology of hepatocellular adenomas varies depending on the type of genetic alterations present in the lesion:

Pregnancy-associated hepatocarcinoma carries the risk of rupture of the adenoma, leading to a high mortality rate for both mother and her fetus.

Characterized as mesenchymal blood vessel tumors in the liver, these lesions are the most common benign liver tumors (see image). The discrete red-blue nodules have a soft consistency and are generally found beneath the Glisson’s capsule. They are composed of vascular channels embedded in fibrous connective tissue. These lesions are commonly mistaken as metastatic lesions. 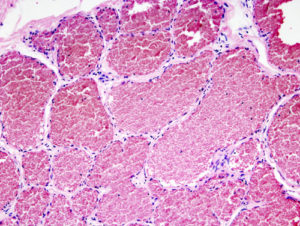 Other Benign Tumors of the Liver

Rare benign tumors of the liver include the following: 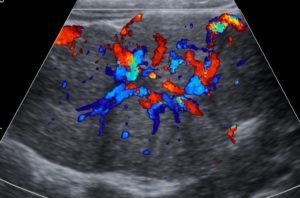 These solitary lesions are made up of hyperplastic cells that surround a central stellate scar in a thickened plate pattern (see image). They appear to be more common than hepatocellular adenoma and are frequently seen among women in the third or fourth decade of life.

Focal nodular hyperplasia appears as a firm light-brown to yellowish mass in different sizes. It has a dense central stellate scar that divides the nodule into many parts with radiating septa. These solitary nodules are found beneath the Glisson’s capsule.

When viewed under a microscope, the lesions resemble a focal form of inactive cirrhosis. Although the cells are similar to normal hepatocytes, they do not have the normal cord arrangement in relation to other structures in a hepatic lobule.

Other nodular disorders in the liver include the following: