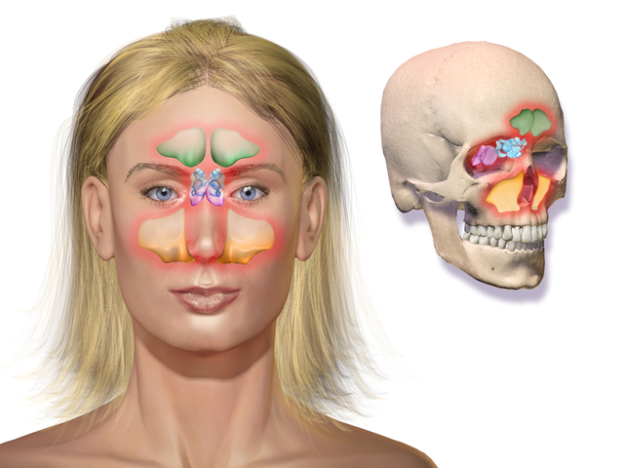 Acute sinusitis in children can be defined as the acute inflammation of the paranasal sinus mucosa or nasal passages with a duration of < 4 weeks. This inflammatory condition can be caused by viral, bacterial, or fungal infections. Non-infectious etiologies of acute sinusitis can be attributed to allergens or irritants.

There are no differences in the incidence of rhinosinusitis among boys and girls; however, the condition has become more common in both sexes over the past decade.

Children with congenital genetic disorders that impair mucosal ciliary movement or those with an impaired secretory immune response are predisposed to recurrent episodes of rhinosinusitis.

Etiology and Pathophysiology of Sinusitis

The most common etiology of rhinosinusitis is viral in origin and secondary bacterial infections of the sinuses are common. Streptococcus pneumoniae, Moraxella catarrhalis, Staphylococcus aureus, and non-typeable Haemophilus influenzae are the most commonly identified etiologies of bacterial rhinosinusitis.

The most important pathophysiological change encountered is the obstruction of the sinus drainage pathways, and otitis media is a common cause bringing about this change in children. The normal metachronous movement of mucous towards the natural ostia of the sinuses is disrupted by mucosal inflammation.

Additionally, children with recurrent bacterial rhinosinusitis usually show some evidence of ciliary impairment and alteration in the quantity or quality of mucus. The latter can be attributed to asthma and other allergic conditions.

Viral upper respiratory tract infections can also alter the composition and quantity of the mucus within nasal and paranasal sinuses, which can put the child at an increased risk of acquiring a secondary bacterial infection.

When a child presents with symptoms and signs suggestive of an upper respiratory tract infection, attention should be paid to the severity of the symptoms and the possibility of rhinosinusitis.

Common cold presents with a runny nose with mucous discharge and improves within 10 days; however, it may be accompanied by fever that may last up to two days. The pattern of illness in acute bacterial sinusitis can be categorized as follows:

Rhinosinusitis is a presenting feature in almost all children with viral upper respiratory tract infections; therefore, it is important to differentiate bacterial from viral sinusitis. This distinction is important because viral rhinosinusitis resolves spontaneously, while the bacterial variant in children requires specific antimicrobial therapy.

Major criteria include the following:

Minor criteria include the following:

If acute sinusitis is suspected, the treating physician should look for clues that point to a possible bacterial than viral etiology. The most crucial differences between bacterial and viral acute sinusitis, in favor of the former, are respiratory symptoms lasting more than ten days, purulent nasal discharge and a high-grade fever, and worsening of symptoms after an initial temporary improvement.

Proper history taking and a physical examination are required in children who present with upper respiratory tract infection symptoms, to differentiate between viral and bacterial etiologies. Patients with suspected acute bacterial sinusitis should be suggested advanced confirmatory tests, if possible, before starting antibiotic therapy.

Because of these reasons, imaging studies should be reserved only for complicated and recurrent cases.

Magnetic resonance imaging studies of the brain are useful in excluding complications of acute bacterial sinusitis such as brain abscess and cerebrovascular venous thrombosis.

Once the diagnosis of acute bacterial rhinosinusitis has been established, empirical antibiotic therapy should be started. Additionally, symptomatic treatment of nasal and sinus congestion is indicated to decrease the severity and duration of symptoms.

The antibiotic of choice for acute bacterial sinusitis in children is amoxicillin-clavulanate. The dose is usually dependent on the severity of the infection. Children with non-severe sinusitis usually receive a standard dose of 45 mg/kg/d orally, three times a day. High-dose amoxicillin-clavulanate is defined as an oral dose of 90 mg/kg/d twice a day and should be reserved for children with severe bacterial sinusitis.

Ceftriaxone (a substitute for oral antibiotics): Children who are unable to tolerate oral medication should be given a single dose of 50 mg/kg/d ceftriaxone intravenously or intramuscularly.

If sinusitis caused by penicillin-resistant S. pneumoniae is suspected, children exhibiting type-1 hypersensitivity to penicillin derivatives can be treated with a combination of clindamycin (or linezolid) and cefixime. Linezolid is effective against S. pneumoniae, but lacks activity against H. influenzae and M. catarrhalis. Levofloxacin, which has a high level of activity against both S. pneumoniae and H. influenzae, may be prescribed instead of amoxicillin-clavulanate and linezolid. Children with a delayed hypersensitivity reaction to penicillin can also receive a combination of cefixime and clindamycin.

Intranasal corticosteroids have shown objective clinical improvement in children with acute bacterial sinusitis and are recommended as an adjunctive therapy.

Saline nasal irrigation or lavage (not saline nasal spray) has been used to remove debris from the nasal cavity and temporarily reduce tissue edema to promote drainage from the sinuses.

Topical or oral decongestants, mucolytics, and topical or oral antihistamines are not generally recommended for acute bacterial sinusitis in children. Antihistamine therapy is useful in reducing typical allergic symptoms in children with atopy who also have acute sinusitis. Adequate hydration and mucolytic agents might be useful in children with acute bacterial rhinosinusitis as they facilitate sinus drainage and help achieve symptomatic relief.

Children who fail to respond to medical therapy or those with frequent recurrences should be indicated surgery aimed at the drainage of sinuses. Surgical approaches include the following:

Functional endoscopic sinus surgery is currently the best therapeutic option, which has shown success in about 75% of patients with complicated, persistent bacterial sinusitis.