Gastroesophageal reflux is the temporary reflux of gastric content into the esophagus. This condition may also occur in healthy individuals. To a certain degree, it is a physiological response, particularly after the consumption of a fatty meal or wine.

Gastroesophageal reflux disease (GERD) is sometimes called (acid) reflux disease. GERD leads to a diminished quality of life and/or puts the individual’s health at risk. GERD is divided into:

Up to 20% of people in western countries are affected by acid reflux disease, and the incidence is increasing; 60% of these patients display no lesions (NERD). The remaining 40% display reflux esophagitis (ERD).

Depending on its etiopathogenesis, reflux disease is divided into 2 categories:

The prevalent causes of primary reflux disease include a primary insufficiency of the lower esophageal sphincter and the increased production of gastric acid, often of unknown origin. 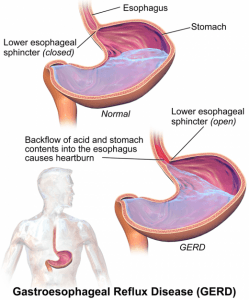 A secondary reflux disease arises when there is a determinable underlying condition that causes an esophageal sphincter disorder or aggressive reflux. For example:

In addition to these, a dysfunctional self-purification of the esophagus (decreased esophageal clearance) also leads to prolonged contact of the reflux with the esophagus.

Finally, another fact that is related to the disease’s pathophysiology and which is crucial, is that the esophageal mucosa is subject to damage caused by acidic gastric juices. Alkaline biliary reflux is very rarely the reason behind reflux disease.

Note: From a pathophysiological view, lower esophageal sphincter insufficiency is a crucial component of reflux disease.

The cardinal symptoms of gastroesophageal reflux disease include:

Many patients also describe a certain thoracic pain (differential diagnosis: myocardial infarction). Paroxysmal retrosternal pain is caused by a spasm of esophageal muscle, which can occur in cases of recurrent reflux. A reflux-induced vagal stimulation can cause a dry cough, whereas some patients also complain of weakness and vomiting.

In GERD, mucosal lesions can become ulcerated and form strictures and peptic stenoses in the lower esophagus; such circular strictures are also known as ‘Schatzki’s Rings’.

A potential nocturnal aspiration of gastric contents can lead to pneumonia or chronic bronchitis; asthma can also be provoked or can worsen if already present. The nocturnal intensified backflow of acid can also lead to laryngitis with hoarseness, especially in the morning.

A lethal complication of reflux disease is Barret’s esophagus. The multilayered, non-cornified squamous epithelium of the terminal esophagus is damaged by the constant, non-physiologic contact with gastric acids, ultimately resulting in an intestinal-type columnar epithelium with goblet cells.

Barrett’s esophagus appears in endoscopy as in the images below:

Mucosal lesions run out in a tongue-like manner in an irregular Z-line. Histology confirms the suspicion.

Barrett’s esophagus and the associated epithelial dysplasia are considered precancerous since adenocarcinomas can subsequently develop (about 10% of the cases).

Another cause of mucosal esophageal ulcerations is medication (NSAIDs, doxycycline, etc).

Other conditions whose symptoms may resemble those of reflux disease include myocardial infarction, coronary heart disease, and gastroduodenal ulcers.

When a patient describes symptoms possibly related to a mild acid reflux disease, first-line treatment with PPI can be attempted. If the patient responds to the treatment, the diagnosis of reflux disease will be corroborated.

Endoscopy should be performed to confirm reflux esophagitis and inspect the patient for a possible Barrett’s esophagus. This should be followed by biopsy (‘Four-Quadrant biopsy’). The endoscopic findings facilitate the classification of reflux esophagitis into categories, depending on the degree of severity (see below).

Endoscopy also helps to exclude other conditions otherwise included in the differential diagnosis: esophageal thrush (yeast infection) has a whitish appearance. Eosinophilic esophagitis (unknown etiology, but often associated with diseases of the atopic spectrum) stands out with bloody mucosa (‘crêpe-paper’ mucosa) and ring-shaped erosions, sometimes called “feline-esophagus”, because of its resemblance to the esophagus of a cat. 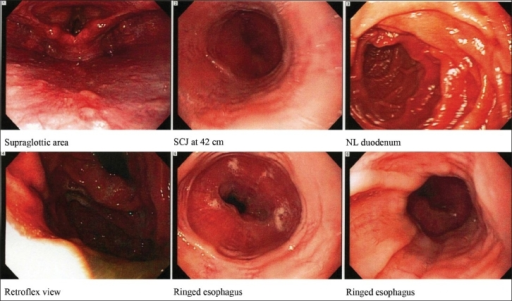 Image: Concentric rings in the distal esophagus, consistent with eosinophilic esophagitis. By: Openi. License: CC BY 2.0

In addition to endoscopy with four-quadrant biopsy, methods such as chromoendoscopy with methylene blue, fluorescence studies, and magnification endoscopy can also be performed to diagnose and monitor the disease.

The tissue extracted during endoscopy is investigated for features of reflux esophagitis. After that, additional information that may be obtained include leukocyte infiltration, squamous epithelium proliferation, ulcerations, and cornification.

Picture: Histological assessment of the esophageal mucosa (hematoxylin and eosin ×200) from sham-operated rats (A) and GER model rats (B, C). Normal esophageal mucosa is shown in A (controls). The absence of esophageal mucosal inflammation is shown in B (NERD). Basal layer thickening, vascular congestion, and the infiltration of inflammatory cells, such as eosinophils, are shown in C (reflux esophagitis). By: Openi. License: CC BY 2.0

The existence of Barrett’s esophagus is indicated by the conversion of the squamous epithelium into a columnar epithelium with goblet cells.

This method is particularly applied to patients with NERD. The esophageal pH is monitored for 24 hours through a nasal esophageal tube, and a pH of ≤ 4 corresponds to the reflux of acidic gastric content. In healthy individuals, such episodes are only seen postprandially (after a meal) and just for up to 5 minutes. In patients with acid reflux disease, reflux episodes are particularly observed at night and after midnight.

As mentioned in the section about esophagoscopy, there are many useful classifications of GERD, depending on the endoscopic findings. Two of them will be discussed here since they are fairly common exam questions:

Generally, the therapy for reflux disease should encompass the following supportive measures:

The combination of frequent complaints and esophagitis makes the use of medications necessary. First-choice medications include PPIs, e.g., omeprazole or pantoprazole, which suppress gastric acid secretion and help regenerate the mucosa.

Initially, therapy starts with a high dose (so that existent erosions will heal more quickly). Maintenance therapy is continued with half the therapeutic dose (step-down-treatment). If the patient relapses after the end of the treatment, the long-term prophylactic administration of PPIs comprising half the standard dosage is applied. For occasional relapses, a patient can take PPIs on demand.

H2-receptor antagonists and antacids are recommended only in mild cases without signs of inflammation.

A laparoscopic Nissen fundoplication is indicated for stage IV disease when conservative methods fail to succeed, when there is an intolerance to PPIs, or when complications persist (e.g., aspiration pneumonia). Surgical therapy can also be applied to younger individuals who reject long-term PPI treatment.

In a Nissen fundoplication, a cuff is laparoscopically laid around the lower esophageal sphincter to narrow the cardia and prevent reflux. In order to form the ‘cuff’, the fundus must be mobilized. Eventually, the mobilized fundus is pulled dorsally to the esophagus and is ventrally sewn in place with loose sutures. This method can achieve subjective freedom from symptoms in up to 80% of the cases.

A complication that is relatively common and possibly the one asked most often in the exams, is the ‘gas-bloat syndrome’. Patients with reflux disease, who used to swallow air before the operation, continue to do so postoperatively (the disorder is referred to as aerophagia). However, a successful fundoplication does not allow for the air to be vented, since the gastroesophageal passage is subjected to a proper pressure ratio. This can lead to nausea, feelings of pressure, and even arrhythmias, and a second operation is indicated in order to loosen the cuff.

Because of the increased risk of malignant degeneration in Barrett’s esophagus, patients are consistently treated and are also frequently monitored endoscopically with multiple biopsies.

In the case of Barrett’s esophagus without intraepithelial dysplasia, the patient undergoes 2 endoscopic examinations in 1 year. If the results continue to show no degeneration, an interval of 3 (long-segment-Barrett) and 4 (short-segment-Barrett) years is considered to suffice.

In the case of Barrett’s esophagus with LGID, the patient undergoes 2 endoscopic examinations within the first 6 months. Thereafter, follow-ups are performed once a year.

In 90% of the cases, reflux esophagitis resolves with PPI therapy. However, if treatment is stopped, up to 50% of patients relapse.

Ten percent of patients with reflux disease develop ulcerative esophagitis. Barrett’s esophagus occurs in up to 5% of GERD patients and up to 10% of these patients develop an adenocarcinoma.