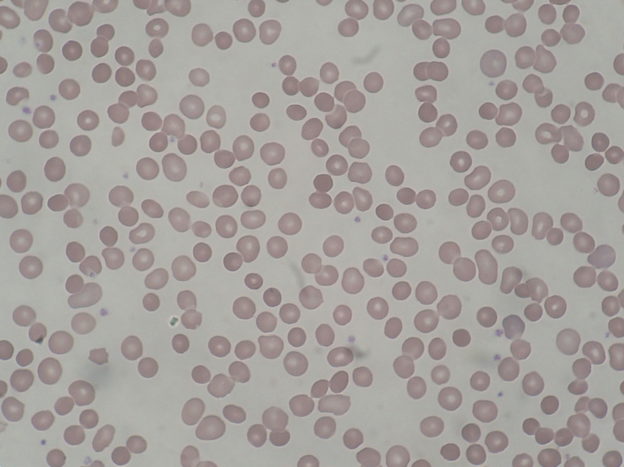 Approximately 1 in 2,000–5,000 Caucasians in the United States and Europe have hereditary spherocytosis. The autosomal dominant inheritance pattern is responsible for three-quarters of all cases, but the disease can also occur due to spontaneous mutation.

Researchers have recently demonstrated that numerous abnormalities in red blood cell membrane proteins can lead to the development of the clinical presentation of hereditary spherocytosis. The most frequently encountered membrane protein defect recognized as the underlying molecular lesion in spherocytosis is ankyrin 1, followed by spectrin and protein band 3.

Some hereditary spherocytosis gene defects can be identified in chromosomes 1, 8, 14, 15, and 17.

A red blood cell or erythrocyte is a ≤ 8 micron–wide element of the blood that, apart from being part of circulating blood, needs to be able to pass through the capillary network and the spleen. The diameters of the capillaries and the red pulp’s endothelial passages are 3 and 1 micron wide, respectively, which indicates that the erythrocyte should be able to change shape without fragmenting.

The components responsible for the deformability of red blood cells are as follows:

The membrane of the erythrocyte comprises a complex combination of proteins between double lipid layers that are positioned on its outer surface. The membrane has multiple penetrating proteins that help it fulfill its biological functions.

In hereditary spherocytosis, the defective cell membrane leads to the loss of the ability to change shape as the result of membrane surface area loss.

This loss is caused by several red blood cell membrane protein defects, particularly ankyrin-1, band-3, and spectrum defects. Multiple mutations in the genes responsible for the encoding of these proteins are the primary reason for the hereditary spherocytosis spectrum to appear.

Hemolysis is caused by morphologically unstable erythrocytes that cannot undergo the required transformation and break in the narrowest place of the path, namely the epithelial slits of the spleen’s red pulp.

The hemolysis of affected spherocytes leads to an increase in unconjugated bilirubin, the main degradation product of the erythrocyte, and a decrease in red blood cell count. Elevated bilirubin levels present as kernicterus in neonates.

The signs and symptoms of hereditary spherocytosis result from the spleen destroying abnormal erythrocytes-spherocytes. The number of spherocytes in circulating blood determines the course of the disease, either in acute or chronic form.

Hereditary spherocytosis presents as anemia and then jaundice, followed by varying degrees of pallor, fatigue, hypoxia, tachycardia, and exercise intolerance.

Hereditary spherocytosis can manifest in various age groups beginning in the neonate period, in children aged 4–5 years, and in adults. Some children remain asymptomatic.

The chronic form of the disease manifests as severe anemia with pallor, jaundice, fatigue, and exercise intolerance.

Severe cases may be marked by the development of the following features (similar but to a lesser extent than in thalassemia major):

Anemia rarely manifests in the first 7 days of an infant’s life. A peripheral blood smear may not show spherocytes, as they are not frequently seen. Splenomegaly is rarely present in neonates. The reticular count is rarely elevated.

The most consistent findings are pathological MCHC and MCV parameters.

Future parents should be questioned about their personal and family history of hereditary spherocytosis during prenatal and preconception visits.

The MCHC/MCV ratio should be determined in the evaluation of the possibility of hereditary spherocytosis in a neonate with a positive family history. Based on a cut-off value of 0.36, the following paths are proposed:

Although the genetic basis for the development of hereditary spherocytosis has been well researched and documented, genetic tests are not routinely conducted due to the availability of simpler tests to confirm the diagnosis.

However, the DNA-based method for the detection of membrane protein defects should be considered. Single-strand rapid screening to confirm mutations in recognized regions of genes that are associated with hereditary spherocytosis is also available.

Hereditary spherocytosis can be divided into 3 classifications based on severity.

Common complications of hereditary spherocytosis include the following.

The condition takes place in the gallbladder, where sludge and calculi are formed due to excessive unconjugated bilirubin. This results in:

Rapid onset of anemia occurs due to an acute viral infection followed by hyperplasia of the reticuloendothelial system, prolonged serious illness, pregnancy, or other stressful situations.

An aplastic crisis is a rare event that usually occurs after a parvovirus B19 infection. Following the viral attack on red blood cells and precursors within the bone marrow, intermittent aplasia develops, leading to a drop in the reticulocyte count below 1%, as well as a drop in hemoglobin level below 60 g/L.

Aplastic crises typically last for up to 10 days and resolve completely. Parvovirus B19 post-infectious immunity is usually permanent once the crisis has resolved.

Differential diagnosis should focus on disorders that create anemia, including the following:

Intervention is effective in almost all cases of hereditary spherocytosis due to the elimination of the main site of spherocyte fragmentation, the spleen. Therefore, restoring the reticulocyte count and bilirubin levels to normal values will prevent common complications. Interventions should only be performed after the age of 6–9 if the clinical course of the disease allows.

Regardless of the severity of clinical presentation, splenectomy should not be performed if the patient is younger than 3 years, even in the setting of frequent transfusions needed to cope with the disease.

Laparoscopic intervention is the gold standard if there are no contraindications. Immunization against Neisseria meningitidis, pneumococci, and Haemophilus should be performed in advance.

Possible complications of surgery include the following:

Folate therapy should be considered in moderate and severe cases, although the benefit of the therapy has not been definitely proven.