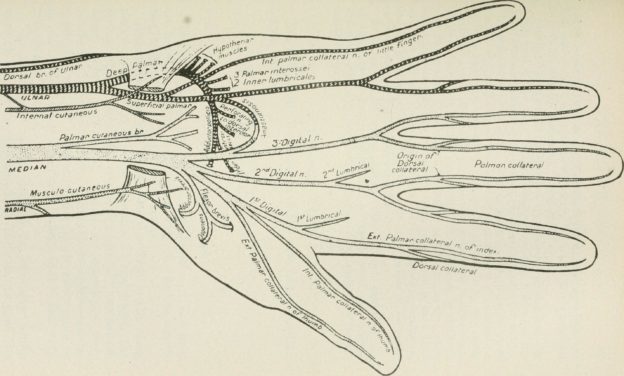 Pathophysiology and Etiology of Mononeuropathies

Mononeuropathies are lesions to individual peripheral or cranial nerves. For all mononeuropathies, the underlying causes can be varied but are most often trauma. Occasionally, nerves can become entrapped (i.e. from a tumor).

Beware of mononeuritis multiplex. Patients can present with multiple mononeuropathies and this occurs in a number of conditions like Diabetes mellitus, malignancies, HIV or hepatitis C and neurofibromatosis to name but a few. When there is symmetrical mononeuropathy, then these can be difficult to differentiate from polyneuropathies.

With all mononeuropathies, clinical diagnosis is usually enough. However, the definitive diagnosis can be made using nerve conduction tests. 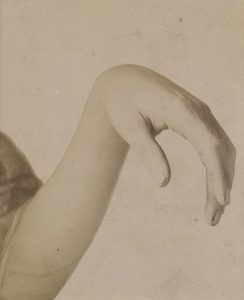 As mentioned previously, the history might include damage at the spiral groove of the humerus, axilla or in the forearm. Patients will often complain of being unable to extend their wrist. They may also have some forearm/hand/thumb numbness.

Risk factors to take from the history include diabetes, alcoholism, leaning on their arms excessively, trauma and lead poisoning. A full history should be included to identify all risk factors.

On examination, patients will have wrist drop with an inability to extend the wrist and fingers. Make sure you examine the triceps, brachioradialis and extensor indicis proprius.

Make sure a neurological examination is done with sensation tested in the upper limbs. Patients can often have decreased sensation over the dorsum of the hand/thumb area. They may have difficulty spreading their fingers (the pseudo ulnar interossei often have weaknesses). 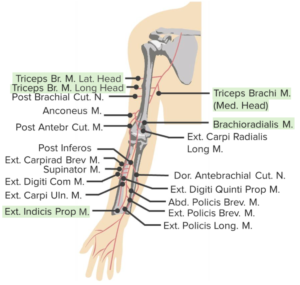 If there is a lesion at the level of the humeral spiral groove, expect patients to have normal triceps function (radial nerve has already supplied this muscle before reaching the spiral groove), but brachioradialis and extensor indicis proprius will be weak.

If the lesion is at the level of the forearm, patients will have posterior interosseous syndrome, triceps and brachioradialis will be normal with extensor indicis proprius being weakened. 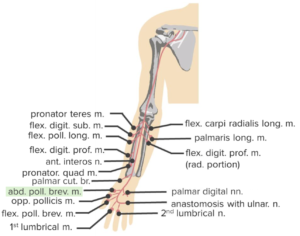 Patients with a median nerve injury will sometimes complain of dropping objects. They may have tingling and numbness in their hand, thumb, index and or middle fingers. This can radiate up the arm and occasionally up to the shoulder.

Ask if the symptoms are worse at night as patients often complain of worsening numbness etc. at night and will wake to the sensation. Ask about the onset, as symptoms can develop over months to years (depending on the cause; the most common of which is carpal tunnel syndrome.)

Risk factors for median nerve damage include female gender, patients with a diagnosis of diabetes, pregnancy (especially in the third trimester), hypothyroidism (the link between hypothyroidism and carpal tunnel syndrome exists but is not completely understood), weight gain, trauma, HIV infection and occupations in which work is carried out with the hands (e.g. secretaries, operating machinery, computer joysticks, manual labour etc).

A physical examination should include a test of the abductor pollicis brevis muscle (“Push your thumb up against my hand”). Another sign of a median nerve injury is a positive Tinel’s sign (this is tingling upon tapping the median nerve over the wrist, by the carpal tunnel). 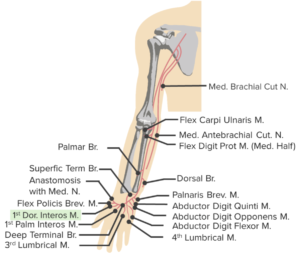 Patients will complain of a “weak hand” and often describe instances of dropping objects and having difficulty turning their keys or the ignition in their car. They typically have numbness and tingling of the fourth and fifth digits. On examination, there may be some wasting of the interossei muscles. Again, the onset of symptoms is important to ascertain as they may appear of months/years dependent on the underlying cause.

Risk factors include being male, diabetes, alcoholism, HIB, leaning on elbows (this can be occupational in nature – e.g. ulnar palsies are common in receptionists). Also, make sure trauma is asked in history as this is obviously associated with ulnar nerve injury.

On examination, look for atrophy of the first dorsal interosseous (FDI). Test the interossei strength by asking the patient to spread their fingers against resistance. On sensation testing, ulnar nerve injury shows decreased sensation to touch and pinprick over the fourth and fifth fingers. They may also have a positive Tinel’s test. 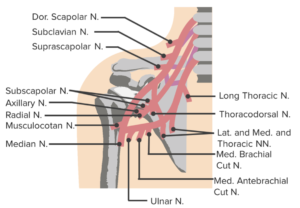 The brachial plexus innervates spinal nerves C5-T1. It branches and has a number of functions, including opening the fist. It can be injured in a number of different traumatic scenarios, but often it will be seen in patients that fall on an outstretched arm.

Patients with shortness of breath who have a raised diaphragm on chest X-ray should have a phrenic nerve injury considered. Remember – the innervation pattern of the Phrenic nerve –C3,4,5 keep the diaphragm alive! 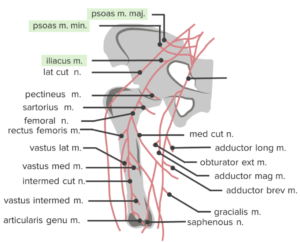 Femoral nerve injury results in both motor and sensory deficits. These include iliopsoas and quadriceps weakness, which causes an inability to flex the hip or knee and “Meralgia paresthetica”, which is the result of compression of the lateral femoral cutaneous nerve of the thigh resulting in lateral thigh numbness.

A common peroneal nerve injury can present as foot drop and numbness and tingling of the leg/top of the foot. Patients often complain of this with a history of squats or yoga. 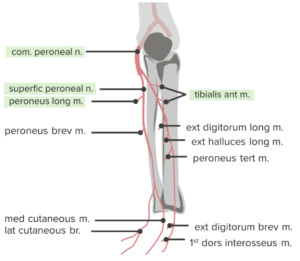 On examination, patients may be unable to pull their foot or toes upwards on command. You will need to localize any possible lesion. Check the peroneus longus by foot eversion, tibialis anterior by foot dorsiflexion and sensation over the dorsal surface of the foot.  If the peroneus longus, tibialis anterior are involved and there is decreased dorsum foot sensation, then common peroneal lesion at or above the fibular head.

If there is involvement of other nerves, then it may be a brachial plexus lesion. If there is bilateral radial nerve damage, then ask about lead poisoning. Also, consider ruling out myotonic dystrophy as this can sometimes result in waste forearms and a bilateral wrist drop.

Think about whether there could be a repetitive stress injury to a joint or tendon (i.e. is this problem neurological or MSK in origin?). Rule out a cervical root lesion and thoracic outlet syndrome. 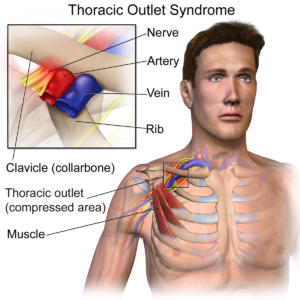 Cervical root lesions of C8-T1 must be ruled out, but are usually associated with neck and arm pain not seen in ulnar nerve injuries.

In some cases, ALS (amyotrophic lateral sclerosis) should be ruled out. Its symptoms are in more areas than just that of the ulnar nerve or if they are accompanied by speech and swallowing issues.

Thoracic outlet syndrome should also be a consideration.

If symptoms are accompanied by bowel/bladder symptoms, then suspect cauda equina lesion. Suspect ALS if other muscles are involved and or fasciculations are present. Myotonic dystrophy may cause weak, wasted legs and bilateral foot drop.

It may be useful to get a wrist/finger splint for the patient to keep their fingers extended. You may also encourage the patients to passively move their wrist/fingers to maintain mobility.

Stop the cause of the problem. Treat the patient’s underlying diabetes if they have it (peripheral neuropathies are a common side effect of diabetes).

This is a common cause of a median nerve injury. Compression of the nerve in the carpal tunnel, where 9 tendons run through, is common. Wrist splints can be used for a carpal tunnel syndrome. Potentially consider steroid treatment. Carpal tunnel surgery can be given in moderate or more severe cases.

Stopping or decreasing the cause is important (this may be an issue for some occupations). Surgery (ulnar nerve transportation) can be offered for severe lesions and for atrophy with active denervation in interossei.

If the nerve is compressed against the head of the fibula, then recovery is common within a few months; however, it can invariably not take place and lifelong palsies do occur.