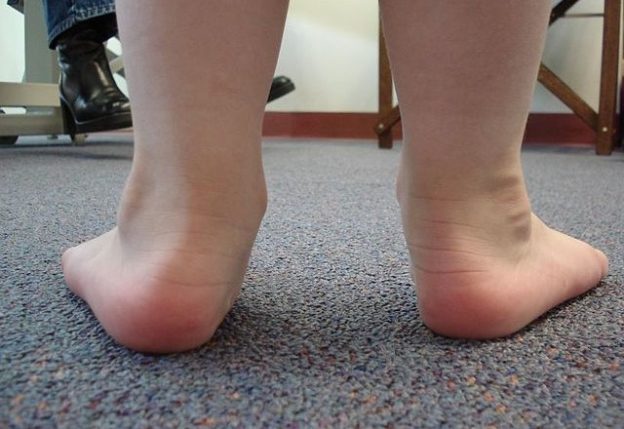 Note on counting: There are 38 weeks of development post-conception (after fertilization of the egg cell), or 40 weeks of pregnancy (WOPs) post-menstruation (after the last period). You may come across both forms of numbering in exams.

Epidemiology of the Malformations

The incidence rate of malformations is 4-6% and consists of 2-3% of all newborns and another 2-3% of children up to the age of 5. At around 21%, malformations are the most common cause of child mortality and are also the primary cause of disabilities.

The cause of congenital malformations is only known in 40-60% of cases: 15% of which are due to genetic factors such as chromosomal anomalies and mutations, 10% are due to external causes, 20-25% stem from combinations of genetic and external factors, and 0.5-1% are caused during the development of twins.

Care is necessary with more minor anomalies, such as microtia (small ears), pigmented spots, or constricted epicanthic folds, as are encountered in 15% of newborns.  In 3-20% of cases, they are an indication of a severe malformation or are part of a syndrome.

Classification of the Malformations

Formation via destruction or alteration of already developing organs, such as intestinal atresia due to a vascular change, or defects in the amniotic bands.

These form upon separation of totipotent cells of the zygote during its development into a blastocyst. Two embryos subsequently form with an identical genotype, and these are natural clones.

These form upon fertilization of two simultaneously matured egg cells by two spermatozoa. Genetically, they are equivalent to siblings. 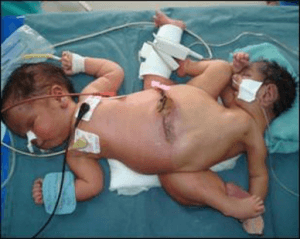 Two fetuses that have grown together due to the incomplete intertwining of the embryoblast in the blastocyst stage on the 13th day after fertilization have a double malformation, and are also called Siamese twins in reference to the famous pair of twins from Siam. Depending on the allocation of organs, which may range from a complete set of organs for each twin to shared organs, post-natal surgical separation is possible.

In the event of a symmetrical double malformation, both fetuses have a complete set of organs, whereas, with an asymmetrical malformation, the uneven allocation leads to allocation to the more developed autosite with the less developed parasite, the development of which can be restricted to a tumor-like attachment in the form of a teratoma at the lowest level.

Terminology of the Malformations

During the embryonic development of the organs, Gr. organogenesis (3rd – 8th week of development), many malformations can arise from many causes. The terms here refer to one organ, but may also refer to different systems in other contexts (e.g. hyperplasia of individual cells in histology).

Multiple factors determine whether a fetus will develop a malformation. The following principles of teratology were first formulated by James G. Wilson in 1959.

Whether or not a malformation will arise, initially depends on the genetic constitution of the fetus, the maternal genome with regard to vulnerability to toxins, and the stage of development.

The stage of development most vulnerable to the influence of teratogens is the organogenesis of the 3rd-8th week of development during the embryonic period.

Of course, the effects of the teratogen depend on the dosage and duration of exposure, as well as the specific mechanism of action.

The characteristics of the developmental disorder have varying degrees of severity: embryonic death, malformations, growth retardation, or functional disabilities, such as neurological or physical disorders, may occur.

Teratogens, or substances that may harm the embryo, are manifold.

These include drugs and medications. Smoking during pregnancy can lead to growth delays with a lower birth weight, which, in turn, increases mortality among infants. In the worst-case scenario, alcohol abuse can result in fetal alcohol syndrome, with mental impairment and typical facial anomalies.

Ingested steroid hormones may lead to the masculinization of female genitals; estrogen to malformations of female and male sex organs.

Diseases of the Mother

These may also entail risks. For instance, maternal diabetes may lead to heart disorders, neural tube defects, and other malformations. Maternal obesity may cause heart malformations or omphaloceles.

These stem from impairments in the paternal genotype that may be caused by advanced age, exposure to environmental toxins, alcohol, and cigarette smoke.

Phase Dependency of the Malformations

Depending on the current phase of development of the embryo or fetus, its vulnerability to impairments, which can have very different manifestations, varies.

In the event of a gametopathy, there exists a pre-conception impairment of the maternal or paternal gamete. This results in structural or numerical chromosome defects that usually lead to the death of the gamete and (unnoticed) abortion.

Blastopathy describes impairments of the fertilized blastocyst (1st-14th-day post-conception), resulting in it fruitlessly settling into and dying in the uterus by the all-or-nothing principle. The possible development of double malformations and identical twins must be emphasized during this phase.

All impairments of the organs during organogenesis (2nd-8th week of development) are referred to as an embryopathy. During this time, the developing organs are especially vulnerable to teratogens depending on the peak of mitosis. The result may be malformations of the entire embryo, individual organs, or the placenta.

During the fetal period (9th-38th week of development) the organs continue to mature and differentiate. Foetopathies from this period can lead to functional disabilities, as the brain is especially vulnerable to teratogens.

During organogenesis (3rd-8th week of development), the embryo is particularly vulnerable to teratogens. In this overview, the organs are listed by their temporal sequence of development with possibilities for impairment.

Heart (3rd-7th – 9th week of development): the heart grows from the lateral plate mesoderm. About every 100th newborn comes into the world with a heart defect. The most common are persistent truncus arteriosus, atrial septal defect (ASD), and ventricular septum defect (VSD). These may also be indications of a syndrome.

Extremities (4th-6th – 9th week of development): the extremities are mesenchymal in origin, and also stem from the lateral plate mesoderm. The symptoms of meromelia (Gr. melia – extremity)/amelia, or the lack of parts or all of one or more extremities, are due to impairments during this time. One well-known cause was the ingestion of thalidomide (Contergan©), sold as sleep medicine in the 1960s.

Ears (4th-10th – 32nd week of development): if the ear, developing from the ectodermal inner ear and Eustachian tube, as well as the eardrum from the endoderm, is damaged during this vulnerable time, the result may be deafness, auricular dysplasia, or a deep base of the ear.

Urogenital system (4th-16th – 40th week of development): the shared mesodermal precursor is the pronephric duct, from which the kidneys and the deviating urinary passages, and the sex organs (via the Wolffian and Müllerian ducts), form. One common malformation is the urachal fistula after persistent connection of the urinary bladder with the navel, upon which urine is discharged by the navel of the infant upon activation of the abdominal press.

The various movements of the organs involved during embryogenesis must also be considered: For instance, the kidney ascends while the testicles descend.

Face, lips, palate (5th/6th-7th/8th – 16th week of development): the face develops from five mesenchymal facial processes, which form from neural crest cells. Should the epithelia be unable to fully make contact, or if there is a lack of proliferation or a break-up of already forming coalescence zones, such as the medial nasal prominence and the maxillary process, the relatively common cleft lip and palate may develop (or partial manifestations: cleft lip, cleft palate) with an incidence rate of approximately 1:1000.

Multiple preventative strategies can greatly decrease the occurrence of malformations. They should primarily be applied before conception.