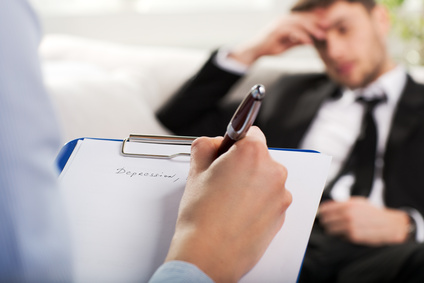 Over the shoulder view, of a business man sit on a couch talking to his psychiatrist

Depression is a unipolar mood disorder characterized by persistent low mood and loss of interest in daily living activities. It is associated with somatic symptoms, such as weight loss, insomnia, and decreased energy. It is also known as major depressive disorder (MDD). The disorder affects one’s thoughts and actions leading to the inability to perform daily duties.

It should be differentiated from normal occurrences of grief and sadness based on the following criteria:

In 2015, an estimated 16.1 million adults, or 6.7% of the adult population, in the United States had experienced at least one episode of depression within the previous year. It is also thought to be twice as common in women than men due to hormonal and psychosocial differences.

The incidence of depression is highest between the ages of 20 and 40 years. A study on the nature of presenting illness showed that depression represented 12% of all new illnesses and 45% of all mental illnesses.

The numbers worsen with age; the prevalence of depression among those older than 65 years of age is 15%. The disease also accounts for 50% of mental illnesses among the elderly. Suicidal ideation and somatic presentation are more widespread in this age group compared to others.

The DSM classifies depression based on various categories and specifications that can become very complex. A simpler classification is the proposed two-dimensional system, one of chronicity and one of severity.

The cause of the disease is not well elucidated. However, it is associated with several risk factors, or causative mechanisms, that eventually lead to altered behavior and cognition.

A major depressive disorder is more common among monozygotic twins (75 %) than dizygotic twins (14—19 %), suggesting that the disease has some genetic influence.

Biological causes, such as neuroendocrine malfunction, lead to decreased levels of neurotransmitters, such as serotonin, which control mood and behavior. The low levels of hormones cause depression.

Cognitive distortions cause a negative perception of the world and make some people more susceptible to environmental stressors. These individuals believe they have no control over these circumstances.

Early childhood interpersonal losses may be a risk factor for the causation of the disease because these patients experience increased occurrences of the disease.

Other risk factors include:

The risk factors act synergistically to cause the disease in any of the following pathways:

Environmental influences cause genetically predisposed individuals to develop abnormalities in amine neurotransmission, which mediates depressive states. Nerves that contain noradrenaline and 5-hydroxytryptophan are impaired; thus, there is no transmission. These neurotransmitters are the main regulators of mood, attention, sleep, appetite, and cognition. With reduced transmission, the patients are tipped into depressive states, insomnia, and reduced appetite and interest.

Calcitonin is a hormone that is produced in a stressful situation, and studies have shown patients with depression have altered calcitonin levels. As a result, pituitary corticotrophin hormone is released, which triggers the release of cortisol into the circulation, thus mediating depression.

Evidence-based literature associate structural and functional abnormalities in the prefrontal cortex with depression. The nerves that transmit messages involved in mood and behavior are destroyed, leading to the disease. The theory is supported by the improvement of patients who undergo deep brain stimulation and evidence gathered during neuroimaging and post-mortem examinations.

Untreated depression leads to neurotrophic damage to the hippocampus and increases sensitivity to stress factors. The damage is thought to arise from glutamine and glucocorticoid toxicity. This theory is supported by the fact that the recurrence rate of depression increases as the number of recurrent episodes increases, mainly due to further damage with each episode.

A major depressive disorder is diagnosed if a patient has evidence of one episode of depression and does not meet the criteria for bipolar disorder or substance-induced mood disorder.

An episode of depression as per DSM-IV is characterized by at least five of the following criteria:

To fulfill the criteria, the symptoms must include depressed mood or loss of interest and must be present for at least two weeks.

Patients are in a depressed mood during the day and display this by being sad and always expressing displeasure on simple things that happen. Their symptoms may also manifest physically with tearing and irritability, especially in children. Pleasurable events and hobbies are no longer enjoyable to them, and they may have anxiety or nervousness during certain activities.

Those suffering from depression go to bed while in deep thought, thus finding it difficult to sleep. The most common scenario is waking up in the middle of the night or very early in the morning and being unable to get back to sleep. They may also present with excessive sleep after periods of sleep deprivation.

Loss of interest in usual activities, especially hobbies and sexual activity, are common. The patients view themselves as poor in those activities and do not want to be assessed.

Suicidal thoughts or acts indicate a culminated loss of interest in life in general.

These patients have negative self-reflection and view themselves as useless. They then develop a sense of guilt and low self-esteem. This leads to a diminished ability to think and concentrate on various activities.

General complaints include weight loss due to persistent loss of appetite and interest in feeding.

Laboratory investigations are done mainly to rule out other medical conditions and as a baseline before initiation of therapy. They include:

Neuroimaging methods are used to identify any organic disease and study neuroanatomy for possible etiologies of depression. The best imaging modalities are:

It is the treatment of choice for mild disease and is mainly undertaken in an outpatient setting. The forms of psychotherapy include supportive therapy, cognitive-behavioral therapy, and brief interpersonal therapy.

It is indicated for moderate to severe disease that requires hospital admission during the acute phase of treatment. Pharmacotherapy may lead to undesired effects of sedation, sexual dysfunction, vomiting, insomnia, and hypertension.

Tricyclic antidepressants(TCAs) such as Amitriptyline and Clomipramine

They are the first-line agents for managing major depressive disorder due to their response rate but are associated with dangerous adverse effects, such as sedation and anticholinergic effects.

They are used as first-line agents to treat a major depressive disorder in patients who are refractory to TCAs. Common side effects include gastrointestinal upset, sexual dysfunction, and insomnia.

They are second-line agents. The disadvantages of this class of drugs are their association with orthostatic hypotension and dietary associated hypertension.

Bupropion is also used due to its lower rate of sexual dysfunction occurrence. However, it requires multiple dosing. Venlafaxine is associated with elevated blood pressure due to noradrenaline inhibition.

Drugs such as lithium are used in combination with antidepressants in patients who present with anxiety. They also help reduce recurrence rates.

A combination of psychotherapy and pharmacotherapy is more effective in the treatment of a major depressive disorder.

ECT is a safe and effective method of treatment, especially for patients whose symptoms no longer respond to pharmacotherapy. The modality is reported to have a 90% response rate. It is the treatment of choice in:

Cardiac monitoring is initiated, airway secured and the following drugs are administered:

A rubber mouth block is placed and an electrical stimulus is introduced in the temporal and occipital aspect of the head.

The impulse delivered to the brain during electroconvulsive therapy may cause headaches as well as anterograde or retrograde amnesia.

If the disease progresses untreated, then neurotrophic brain damage occurs, which leads to higher rates of recurrence.

Suicidal attempts and acts are also seen with untreated disease, and they are the most common causes of death in depression.

Course and Prognosis of Depression

A 15% mortality rate is seen among patients; the main cause is suicide. Indicators of bad prognosis are a severe disease that warrants hospital admission, multiple episodes, residual symptoms, comorbid psychiatric conditions such as substance abuse and low confidence level, and social dysfunction. Good prognostic indicators include mild disease, the absence of psychotic symptoms, advanced age, and acute onset.