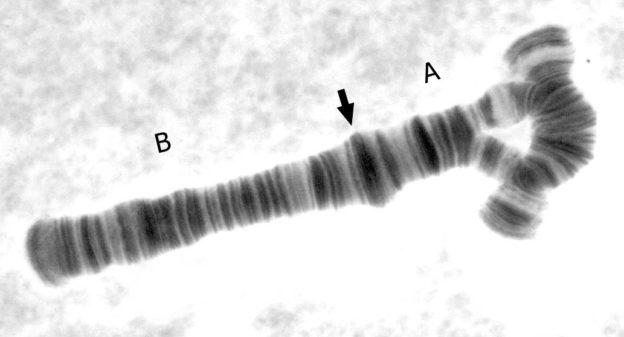 Inversion refers to the rearrangement of a chromosome. Essentially, the chromosome is broken into three segments. The middle segment is inverted, i.e., turned 180 degrees, and then put back into place. The inversion forms a loop, where recombination occurs.

Inversions account for about 1-3 % of all genetic recombination in humans. The heterozygous carriers have no phenotypic abnormalities, but their gametes can have various combinations of deletions and duplications present. These may or may not be viable depending on the genes and the length of the chromosome involved.

The discovery of chromosomal inversion is credited to Alfred Sturtevant, who is known for the invention of genetic mapping. Inversions were recognized initially in the giant salivary chromosomes of Drosophila fly larvae. Indeed, inversions were one of the first genetic variation modalities ever studied.

Inversions do not result in the loss of any genetic material, and most are balanced; thus, they initially appeared to be innocuous to many geneticists. Also, the analysis of inversions is complicated due to their inherent mediation through repeats. Hence, these mutations, even though discovered almost a century ago, have attracted little attention.

Inversions form a diverse group of chromosomal mutations. Some are silent phenotypically while others manifest in a stark manner. While most rearrangements are small, there are few very large inversions documented in the literature, such as the 3 RP inversion of the Drosophila melanogaster. These inversions span thousands of genes and are multiple megabases in size.

There are two types of inversions described in the literature: paracentric and pericentric inversions.

These inversion sequences occur in either chromosomal arm and do not include the centromere.  Thus, recombination occurs in only one arm in part of the loop that forms because of the inversion. However, two other loops can form in the center of the chromosome, and a third loop forms near the centromere.  Most chromosomal inversions in nature are paracentric.

In this inversion sequence, the centromere is a part of the segment that undergoes inversion, and the breakpoints are on either side of the centromere. Thus, recombination occurs in two loops instead of one, and the chromosome can become shorter or longer. If there is a cross over with subsequent recombination in this segment, it forms an unbalanced gamete with either deletion, insertion, or two or zero centromeres, resulting in increased abnormal chromatids, which may lead to chromosomal imbalance. The end result is reduced fertility and overdominance of these inversions.

Other important terms associated with inversion can be described as follows:

The various mechanisms involved in the formation and propagation of inversions can be summarized as follows:

Natural evolutionary drives, such as natural selection or random drift, are critical in repair or elimination of inversions with respect to their geographical distribution and prevalence in the population.

The different techniques for detecting inverted chromosomes are:

There is no loss of overall genetic material in inversions. Most of the arrangements are balanced due to the existence of homologous chromosomes. Hence, inversions usually cause no phenotypical abnormalities in the carriers, which can make them difficult to detect. Indeed, current knowledge about chromosomal inversions is limited, and only a few inversions have been studied in detail in humans.

An unbalanced inversion is associated with problems such as retarded mental and physical growth and birth defects.  Inversions may be involved in pathological mutations in a multitude of ways, such as direct altering of the gene structure, changing gene activity regulation, or predisposing the inversion heterozygote progeny to other secondary rearrangements with genetic significance.

Comparative genomics indicates that inversion may be one of the most significant mechanisms behind the evolution of the human genome. Inversions evolve by drift and selection mechanisms.

Chromosomes are structurally dynamic, and there are about 1,500 inversions that distinguish humans from chimpanzees. Inversions can also be critical in local adaptation and speciation. Some medical geneticists believe that fixed inversion differences might result in incompatibility between species.

The clinical implications of chromosomal inversions are summarized as follows:

Inversions have been instrumental in evolution; thus, they have been explored in various studies involving diversified flora and fauna, such as:

A chromosomal mutation involving breakdown and subsequent, almost simultaneous, recombination in reverse orientation, is known as “inversion.” The prevalence of inversions is about 2 %. It is one of the oldest and most overlooked genetic rearrangements in the literature.

Most inversions are balanced and phenotypically invisible, so they do not alter health. An unbalanced inversion is associated with problems, such as birth defects, limited growth, and developmental delays. However, human studies are scarce, and these mutations’ true clinical potential requires further examination.

Various mechanisms have been proposed to establish the causes of inversions.

Inversions can be detected by a multitude of cytogenetic analysis techniques and chromosomal studies.

While some inversions are connected with reduced fertility and abortions in the offspring of inversion heterozygotes, other inversions may have a role in evolution, speciation, and local adaptation.

Inversions have also found a place in experimental genetics because they could be used to generate highly specific desired chromosomal segment’s duplication.

Families with known inversions could be offered genetic counseling and testing. Like all chromosomal segregation errors, no cure is available.

Hoffmann A. A, Rieseberg L. H (2008) Revisiting the impact of inversions in evolution: From population genetic markers to drivers of adaptive shifts and speciation? Annu Rev Ecol Evol Syst 39: 21–42.