The hypothalamic-pituitary-ovarian axis secretes hormones involved in reproduction. There are three main components.

At the end of the menstrual cycle, the progesterone level drops. That leads to negative feedback stimulation of the hypothalamus. The hypothalamus secretes GnRH, which will initiate FSH secretion by the pituitary gland.

Granulosa cells produce estrogen, which acts on the uterine endometrium. Estrogen causes the proliferation of endometrial stroma and the development of endometrial glands.

The glandular tissues in the fallopian tube proliferate and increase in the number of ciliated epithelial cells. The cilia become more active and propel the ovulated egg towards the uterus to maximize the chances of fertilization. Only one of the maturing follicles is able to dominate over the others. It is called the Graafian follicle. 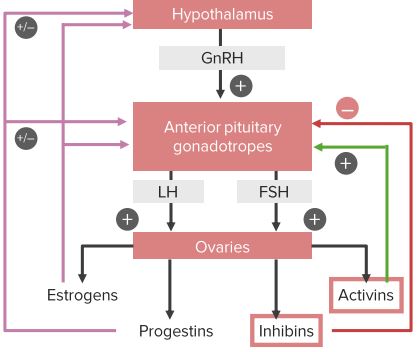 The increasing estrogen level in the blood suppresses the FSH produced by the negative feedback mechanism. The decreasing level of FSH stimulates the pituitary gland to produce LH.

LH acts on the theca cells and is required for ovulation. The increasing estrogen level will cause a surge in the LH level by the positive feedback mechanism. This phase of the reproductive cycle, from FHS release until ovulation, is called the follicular phase.

After ovulation has occurred, the ruptured follicle becomes the corpus luteum. In addition to producing estrogen, it produces progesterone. Progesterone induces the uterine endometrium’s secretory functions and signals the hypothalamus to stop producing GnRH. This, in turn, deactivates FSH and LH production.

In the initial three months of pregnancy, the corpus luteum produces progesterone, bringing the negative feedback into effect. As the pregnancy progresses, the placenta starts producing ovarian hormones to sustain the pregnancy.

Inhibition of the hypothalamus-pituitary ovarian axis

Oral contraceptive pills work by mimicking pregnancy with high progesterone content. They inhibit the secretion of GnRH from the hypothalamus and, consequently, FSH and LH from the pituitary gland.

Other forms of HPG axis inhibition include:

A series of changes that occur in the anatomical structure of sperm after its release in the female genital tract is called sperm capacitation.

The spermatozoa which leave the epididymis are still under the inhibitory effect of the genital tract; therefore, structural modifications are required before fertilization can take place. These structural modifications occur when the spermatozoa come in contact with the female genital tract environment. The inhibitory factors are washed off by the uterus and the fallopian tubes.

Inside the male genital ducts, spermatozoa are provided with a thick cholesterol membrane surrounding the acrosome. Floating vesicles are a continuous source of cholesterol molecules, which become part of the cell membrane, especially covering the acrosome. The release of acrosomal enzymes is, therefore, inhibited.

In the female genital tract, spermatozoa leave the cholesterol-rich vesicles. As they ascend towards the egg, they shed the cholesterol component of the cell membrane, which becomes weak and fragile.

Calcium ions also change the membrane’s intracellular surface so the acrosome fuses with the cell membrane and readily releases its enzymes. The sperm is able to penetrate the granulosa cell layer and the zona pellucida, the membrane surrounding the egg.

As the sperm reaches the zona pellucida, its cell membrane binds to the receptor proteins present on it. The acrosome releases its enzymes in one flush. This leads to the formation of the pathway for the sperm to reach the egg nucleus. The sperm first travels through the perivitelline space beneath the zona pellucida but outside the oocyte membrane.

The cell membranes of the oocytes and the sperm fuse. The genetic material of the sperm enters the oocyte, and fertilization takes place. This process takes about 30 minutes.

As soon as the first sperm penetrates the zona pellucida, calcium ions diffuse through the oocyte membrane. This causes a release of multiple cortical granules into the perivitelline space by the process of exocytosis.

These cortical granules permeate through the holes produced by the acrosomal enzymes in the zona pellucida, thereby sealing off the passage to other sperm. This prevents polyspermy. It is also believed that as soon as fertilization takes place, the cell membrane of the oocyte undergoes depolarization, further preventing the egg from fusing with multiple sperm.