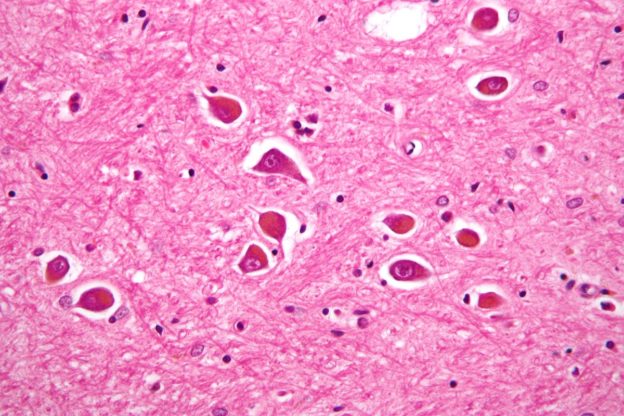 Hepatic encephalopathy syndrome (HES) is divided into short and long term; that is, acute and chronic types.

The former is a sequel of acute viral hepatitis A and B, toxic hepatitis as a result of severe poisoning with hazardous substances or rapid blockage of the liver blood supply. The latter is an after-effect of chronic hepatitis B, C, and autoimmune hepatitis, long-term alcohol abuse, disordered bile outflow, certain drugs, non-alcoholic fatty liver disease (NAFLD) and non-alcoholic steatohepatitis (NASH).

All the diseases mentioned above are triggering factors for cirrhosis, which refers to the build-up of critical amounts of toxins in the bloodstream (mainly ammonia), affecting the brain accordingly. It is crucial to exclude all possible brain diseases and CNS disorders to diagnose HES; hence, liver tests are essential. 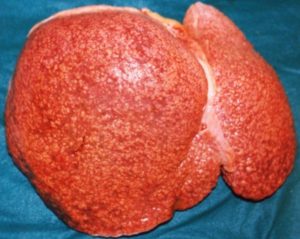 HES occurs in 70% of patients with cirrhosis  (the overt type is detected in almost half of the patients). Moreover, the condition tends to become aggravated with time. Between 25% and  50% of patients who had portosystemic shunt surgery undergo HES.

The survival rate among patients with HES is 42% at 1 year and only 23% at 3 years. After ascites, HES is the second most common reason for hospitalization in the US. The economic cost for the nation’s healthcare system is about $7 billion annually.

These external and internal factors have led to the postulation of various theories to explain the pathogenesis of HES. These include: 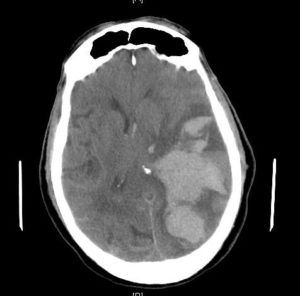 However, the cells are still swollen and often become the reason for the subsequent brain edema, increased cranial pressure, and brain herniation.

Most patients with cirrhosis reportedly have cerebral edema and elevated intracranial pressure (ICP) confirmed on a CT scan. This condition requires particular intensive management, including the administration of intravenous mannitol, a phenobarbital-induced coma, and hyperventilation. Elevated ammonia levels have been demonstrated in cirrhosis patients, and lower levels have been recorded in patients recovering from the disease, thus supporting this theory.

Changes in gene expression may play a pivotal role in neurotransmission deterioration. Thus, there are up- and down-regulation of numerous transport proteins in cirrhosis and ALF (up-regulation of the gene coding for the peripheral-type benzodiazepine receptor in both cases). This change in gene expression leads to increased GABAergic tone in patients with cirrhosis due to reduced hepatic metabolism. The receptors act in synergy with barbiturate and benzodiazepine receptors.

This theory is supported by the fact that the administration of flumazenil has been shown to increase the level of consciousness in some patients with HES.

This theory postulates that HES is a deadly after-effect of the last stage of liver failure and allows toxins to bypass the liver. Liver failure is associated with increased permeability of the blood-brain barrier that causes easy penetration and accumulation of neurotoxins in the brain. These toxins include fatty acids, mercaptans, tyramine, and octopamine.

There are two sorts of hepatic encephalopathy:

The former has a very poor prognosis.

The West Haven classification is used to assess the symptoms of hepatic encephalopathy, which includes:

Grade 4 – coma, weak, or no response to any painful stimuli

The differentiation between CHE and OHE was recently changed. Patients are now considered ‘covert’ in grade 0-1, while those ones in grades 2 through 4 are ‘overt’.

The hallmark of the growing probability of hepatic encephalopathy is the elevated ammonia level in the bloodstream, together with impaired mental function. Only arterial or venous blood must be examined. An analysis of specimens from an extremity may pervert the ammonia concentration pattern in the bloodstream.

EEG reflects high-amplitude, low-frequency waves, and triphasic ones, though seizures have to be excluded. This method is quite helpful for the differential diagnosis of cirrhosis and mental disorders.

CT and MRI of the brain are useful in differential diagnostics of certain brain damage and cirrhosis. 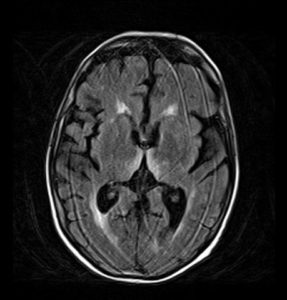 The methods of treatment and observation for the patients with hepatic encephalopathy depend on the flow of the disease and may vary significantly regarding the grade of the encephalopathy.

In all patients, initial stabilization must be done:

Exclusion of non-hepatic reason of encephalopathy is next, which may include:

Treatment to decrease intestinal production of ammonia or increase loss of ammonia from the gastrointestinal tract is thought to be the specific method of treatment for the disease.

Nowadays, low-protein diets are efficient for treating patients with cirrhosis and hepatic encephalopathy as the measure of preventing the latter. However, this method may lead to malnutrition in this category of patients, which overwhelms this diet’s positive effects.

Lactulose decreases the production of ammonia (NH3+) in the intestine by transforming lactulose to lactic and acetic acid with further acidification of the gut lumen. Subsequently, ammonia turns into ammonium (NH4+).

The membrane is less impermeable for NH4+ and it gets trapped in the colonic lumen, reducing the level of ammonia in the plasma. Lactulose acts as a cathartic, declining the colonic bacteria load. The acidification of the gut inhibits ammoniagenic coliform bacteria, so the amount of non-ammoniagenic lactobacilli increases.

To decrease the ammoniagenic bacteria concentration in the colon, neomycin, metronidazole, oral vancomycin, and quinolones, as well as paromomycin, are effective. Neomycin is a second-line antibiotic because it possesses ototoxic and nephrotoxic properties during long-term treatment (systematic consumption).

Rifaximin (rifampin) is as effective as neomycin and paromomycin for improving HES at the dose of 400 mg 3 times per day because of the effects on gut microflora metabolism without changing the number of the bacteria.

LOLA (Hepa-Merz) has two formulations, oral and intravenous. It is used widely in Europe but not in the US. The drug promotes ammonia loss by stimulating the urea cycle by L-ornithine.

Zinc deficiency is common among cirrhosis patients. Zinc sulfate and acetate (600mg orally daily) improve the situation with hyperammonemia, leading to the loss of ammonia that is toxic to the brain tissue.

The way it improves the hepatic encephalopathy course is unclear, but it does affect the brain ammonia uptake and lowers the blood ammonia level.

This is one of the most common disorders associated with cirrhosis; thus, H1 blocker hydroxyzine (25 mg) at bedtime improves sleeping patterns in patients with insomnia. However, this medicine has to be administered carefully because some patients’ general condition may deteriorate with this drug treatment.