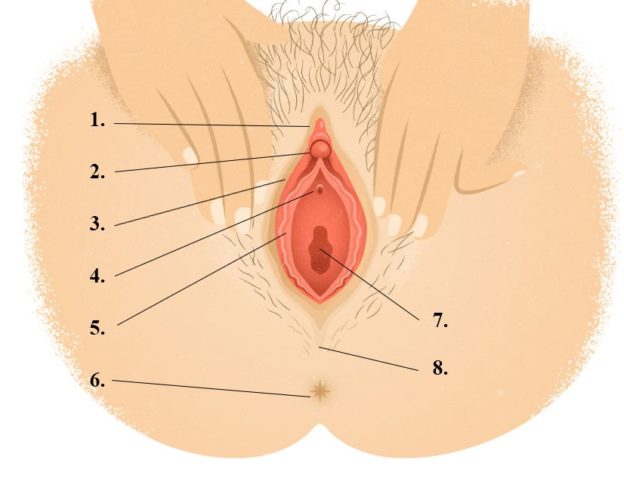 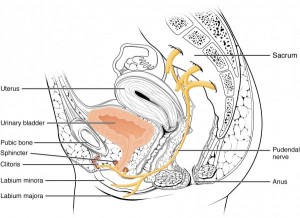 The function of the ovaries

The ovaries supply the female germ cells and produce sex hormones (estrogen and progesterone). The periodical fluctuations of the production of hormones are the foundation of the feminine cycle. The size of the ovary is about 4 x 2 x 1 cm. After menopause (climacteric), the ovaries atrophy.

Position of the ovaries

The plum-shaped ovary lies intraperitoneally in the lesser pelvis (or ‘true pelvis’), the space enclosed by the pelvic girdle and below the pelvic brim, in the ovarian fossa (fossa ovarica). It is located below the division of the iliac vessels (vasa iliaca communis) into the internal and external iliac artery and vein. It is attached with the muscle-containing fascia to the following adjoining structures: 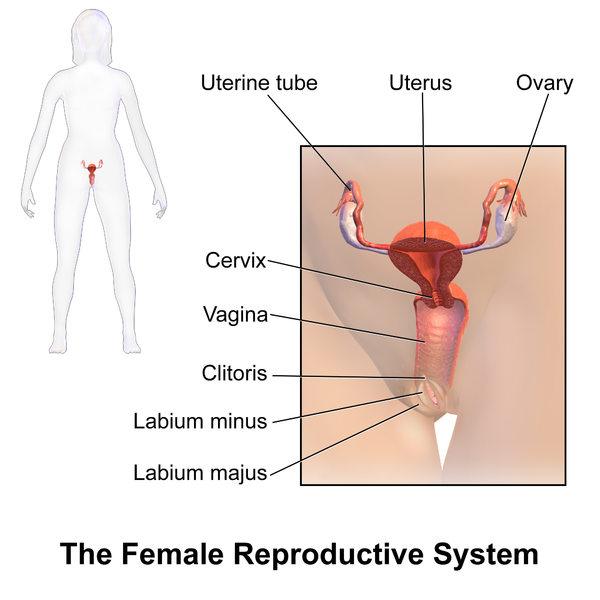 The tuba uterina (also salpinx) catches the ovum that leaves the ovary during ovulation. The ovum can be fertilized in the salpinx and be transported to the uterus through the approx. 10–15 cm long muscular, mucosa-lined uterine tube. The salpinx runs as a component of the broad ligament and is an intraperitoneal structure.

The salpinx is divided into 4 segments. The infundibulum tubae uterinae (a funnel-shaped structure) is abdominal and open to the abdominal cavity (and to the ovary). At its end, there are highly mobile fimbriae. The ampulla of the salpinx (wide part) is attached to the infundibulum. The ovary is fertilized by the spermatozoan here. The isthmus tubae uterinae (narrow part) follows. Finally, the pars uterina is located in the tube wall of the uterus. Here, the tuba uterine joins the cavitas uteri (uterine cavity).

Inflammations of the oviduct

Inflammation of the fallopian tube (salpingitis), e.g., caused by chlamydia, can lead to adhesions within the oviduct. A possible complication might be sterility but it might also increase the risk of a tubal pregnancy which occurs when the fertilized ovum implants in the tube’s mucous membrane. This is also called an extrauterine or ectopic pregnancy. It poses a risk for the mother and should, therefore, be diagnosed and treated as early as possible.

The purpose of the uterus

Structure of the uterus and location in the pelvis

The uterus, which is covered with peritoneum, is located dorsally to the urinary bladder. Its form resembles a pear that is turned upside down and the pear’s wide end forms the fundus. The uterus is about 7–9 cm long but grows to 10 times its size during pregnancy. The corpus uteri are located between its fundus and the cervix (uterine neck). At the transition from the cervix to the corpus, there is a narrowing, the isthmus uteri.

The rectum is located dorsally to the uterus. Between the uterus and rectum is the rectovaginal space, also known as Douglas pouch. In the standing position, the Douglas pouch is the lowermost recess of the peritoneum, a location where abscesses and blood frequently collect. Ultrasound examination of the pelvis is not complete without an investigation of the Pouch of Douglas. The vesicouterine pouch (or uterovesical pouch of Meiring) is a second, but shallower, pouch. It is situated between the urinary bladder and the uterus.

Anteflexion and anteversion of the uterus

In normal physiology, the angle between the axes of the vagina and the cervix axis amounts to around 100° and is called an anteversion. Between the cervix and corpus of the uterus, there can be another anteversion, which is called anteflexion. In elderly women with stretched ligaments from multiple births, there can be a common pathology in which the uterus is tilted backward in the pelvis and lies dorsally. This is called retroversion and retroflexion, which can lead to a heightened risk of uterine or bladder prolapse.

The uterus is attached to the pelvis by various ligaments, which are a frequent topic in tests and exams.

The broad ligament (ligamentum latum) consists of a duplication of the peritoneum and runs from the uterus to the lateral pelvic wall. It contains the fallopian tubes and can be divided into the following parts:

The round ligament (ligamentum teres) runs from the tubal-uterine junction, where the salpinx reaches the uterus, through the inguinal canal to the labia majora. It only has a stabilizing function. Its structure corresponds to the male vas deferens.

More ligaments of the feminine genitals

The cardinal ligament (also: lig. transversum cervicis) consists of the transversalis fascia connecting the cervix with the pelvic wall. It is found at the base of the broad ligament and provides the main support for the uterus and cervix.
It attaches to the cervix and extends laterally, connecting to the endopelvic fascia. 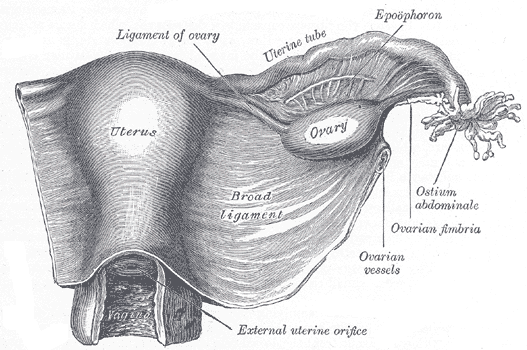 Vascular supply of uterus and ovary

The uterus is supplied by the uterine artery, a branch of the internal iliac artery. It is located in the broad ligament and is crossed by the ureter running retroperitoneally. The uterine artery delivers tubal branches to the fallopian tubes and ovarian branches to the ovary. The latter anastomoses here with the ovarian artery, which originates from the aorta at the level of the 2nd lumbar vertebra.

Function and location of the vagina

The vagina consists of a very elastic, muscular tube that is lined with a mucous membrane. It is the connection to the uterus and is needed for receiving the penis and sperm. Also, it is the birth canal.

Through the protruding of the uterine portio vaginalis cervicis into the vagina, the fornix vaginae, the vaginal vault, emerges at the vagina’s upper end. In situ, the anterior wall and posterior wall lie close together, so that in cross-section, there is an H-shaped lumen. The vagina is firmly attached to the urethra, which is located ventrally to it.

The vagina’s mucous membrane features many transverse folds as well as a longitudinal torus at the front and the back. The vagina’s mucous membrane does not contain glands. Instead, it is moistened by the secretion of desquamated epithelium and capillary transudate. Bacteria that produce hydroxy propionic acid (Döderlein flora) provide an acid environment with a pH-value of around 4, which is a natural protection against pathogens.

The vulva (also pudendum femininum) and the female urethra (urethra feminina) are called external sexual organs. Beginning with the mons pubis (pubic mound), the labia majora (labia majora pudendi) encompass the pudendal cleft (rima pudendi) and end towards the anus. The ligamentum teres uteri, which occupies the inguinal canal in females, ends in the labia majora.

The inner labia (labia minora pudendi) confine the vaginal vestibule (vestibulum vaginae). The urethra, vagina, and glands vestibulares major and minor end in the depth of the vestibule.

The numerous minor vestibular glands moisten the vaginal introitus with their secretion. The pea-sized major vestibular glands (Bartholin’s glands) are arranged in pairs and end on the inside of the labia minora. Their secretion also moistens the ostium vaginae. Inflammation of the glands (Bartholinitis) can lead to a painful swelling of the labia majora.

The clitoris is the woman’s erectile organ. It emerges from the union of the 2 corpora cavernosa clitoridis (cavernous body) that arise as crura clitoridis from the pubic bone and join together as the corpus clitoridis.

The vestibular bulbs, bulbi vestibuli, lie in the inside wall of the vestibulum vaginae and are called glans clitoridis (glans of the clitoris) at the front.

The clitoris is the female analogy of the penis but doesn’t have a connection to the urethra, which runs independently into the upper part at the front of the vestibule.

The arterial supply of the external genitals is provided by branches of the internal pudendal artery.

The function of the female urethra

Location and structure of the female urethra

The urethral wall consists of 2 layers. The inner tunica mucosa changes from the urinary bladder’s urothelium to a multi-layered, non-cornified squamous epithelium of the vaginal vestibule. The glandulae urethrales produce mucus. Externally, there is the tunica muscularis with longitudinally and circularly arranged smooth bundles of muscles.

With its length of about 3–5 cm, the female urethra is a lot shorter than the male urethra. This facilitates the insertion of a transurethral catheter but has disadvantages as well: the short path enables inflammatory pathogens to reach the bladder and cause cystitis or pyelonephritis. Especially with toddlers, it is important to take care of cleanliness to avoid the stool residues from getting into the vagina.