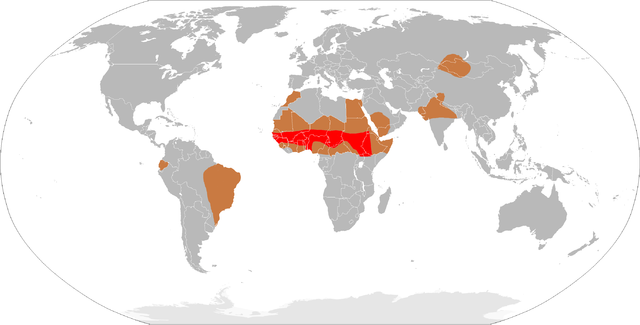 Study of the distribution and determinants of states or events in specified populations and the application of this study to the control of health problems.

Differences between descriptive and analytical epidemiology

Descriptive epidemiology is mainly applied when knowledge about a particular disease is limited and it is intended only to illustrate a potential association. In addition, it mainly relies on data that was previously collected. It focuses on correlational studies of populations, and on individual case reports, series or cross-sectional studies.

Analytical epidemiology, on the other hand, is applied when information about a particular disease is already available. The key is in evaluating the causality associations of the disease. It uses two widely used measures: Relative Risk (or risk ratio) and Odds Ratio.

where a= # of exposed and have the outcome

b= # of exposed but do not have the outcome

c= # of not exposed and have the outcome

d = # who are not exposed and do not have the outcome

a+b =total # of the exposed

c+d =total # of the not exposed

a+c =total # who have the outcome

b+d =total# who do not have the outcome

Odds Ratio (OR) is the tool to measure the risk of a disease when the population at risk is unknown. It is used in case-control studies.

Both RR and OR are interpreted as follows:

When is an analytic test significant? When it is unlikely that the observed association is due to chance.

The two main tests are: 95% Confidence Interval and p-value

The cost incurred in conducting descriptive epidemiological studies is relatively low compared to that of analytical studies. The whole process is less time-consuming.

After conducting these studies, the general factors about a disease such as the highest and lowest rate of occurrence within the population and the temporal patterns of a particular disease are uncovered to a greater extent. Descriptive epidemiology data greatly assist the government in their decisions of resource allocation in order to tackle the health problem on a priority basis.

Descriptive Epidemiology: Overall detail of – the who, the where and the when

Case Definition is a set of Standard Diagnostic Criteria that must be fulfilled in order to identify a person as a case of a particular disease. This ensures that all persons who are counted as cases actually have the same disease. Case definition includes clinical criteria and may include restrictions on time, place and person.

The factor “person” consists of describing a person in terms of race, age, and sex. The factor ‘place’ consists of describing a disease in terms of the geographical location within which it is found. The difference in the prevalence of the disease could be due to the same factor in two locations. The factor ‘time’ involves the distribution of the disease based on the time span in which it occurs and is usually shown as a graph with the number of cases on the -y- and time on the -x-axis.

The time factor represents secular (the disease might occur over a long period of time), periodic, seasonal and epidemic. Cyclic is an alteration that keeps occurring in a cyclical fashion. The variation which occurs may be due to seasonal factors that vary and recur every year or a number of years.

The diagnosis of cholera as a pathological agent by John Snow signifies the importance of recording the place factor in the descriptive epidemiology.

In a defined population under study, the frequency at which a particular event occurs at a specific time interval constitutes the rate. A rate is a special ratio in which the two terms are in different units. For example, if a 12-ounce can of corn costs 69¢, the rate is 69¢ for 12 ounces or 5.75¢/can. A unit rate is a rate with a denominator of 1, while the ratio can be expressed as fractions or as a decimal, in the case of the cans,8.34%.

Incidence = number of new cases over a specific time

Sometimes the framework within which we study a disease might keep on varying. This brought about the concept of the person-time. This is basically like a multiplication factor which represents the rate of an occurrence of a new case in a particular disease (which is nothing but the incidence) over a varied time length. This is referred to as the incidence density.

If for example you monitor 10 people and, among them, 5 get diagnosed with malaria. To get the incidence density you first add up all the varying time points and then divide 5 by the total time periods of all patients (this is represented by a patient’s years).

When we have a specific time period rather than a varying time period, the concept of cumulative incidence occurs. In this case, we are able to see the rate of all the new cases which have occurred over the time period of interest.

In a particular location of Egypt, there is a total of 100,000 people monitored over a period of 5 years and at the end around 1,000 people developed the disease under study. The cumulative incidence rate in this example is equivalent to 0.002.

In a particular time point, the number of people who have a particular disease in the population under consideration constitutes the prevalence. Rather than the incidence, one of the important differences is that it constitutes the ratio and takes into account both the new cases and those already present in order to obtain the final value.

Number of people in the population

Number of people in the population

(Can also be expressed as a number of cases per 1,000 population)

In a correlation study, the general characteristics of the population are measured. This is essential so as to get ideas to conduct further studies. The case report is where we report the findings of either an individual case or those of a group of cases with similar features (either as a diagnosis or some other factor).

Statistical association studies can not be done using the records of a case report. A cross-section study is one where we only measure the disease prevalence along with its level of exposure simultaneously within a population. Though the prevalence of the disease can be concluded, it can be difficult to find the incidence.

It should be noted that not all diseases are fatal. When we get affected by a particular disease, the probability of dying from the disease constitutes the case fatality ratio.

Prevalence based on the view of time

As the name suggests, we just make a crude estimate of the death rate within a given population. In a single year, the total number of deaths that occur for every 1,000 people constitute the crude death rate.

The word ‘peri’ means in and around. The word natal means the event of childbirth. The perinatal mortality represents the mortality of neonates (WHO definition: within 7 days after birth) along with that of fetal death (greater than 28 weeks of the intrauterine life, other definitions have been used) for every 1,000 births.

For every 100,000 live births that occur, the number of maternal deaths constitutes the maternal mortality rate and it represents the gross health care system of the society. Many countries use this as a decisive factor when improving health care services.

Childbirth is a natural process and the mother is generally responsible for the survival of the child during the event. The untimely death of the mother is rare. So a considerable childbirth event is taken to obtain a comparable value.

This can be better understood through a simple example. When you get a common cold, is there a need to panic? Though there might be a problem, it is unlikely in most circumstances that a common cold by itself will cause death to a patient.

But at the same time, if a person is diagnosed with fulminant hepatic failure, it is absolutely essential to get admitted to a hospital and get treated immediately. This is important as the fatality rate is higher in such a disease. This is comparable to the case fatality ratio. It represents the probability of dying from a particular disease after having contracted it.

The second concept can be explained by the fact that though some diseases are very dangerous and may cause death, the total occurrences of the diseases might be lower compared to that of other diseases. On the other hand, though a disease may be less fatal compared to other diseases, it may be more common in terms of its occurrence. This is the proportional mortality ratio and it represents the number of people who die from a particular disease out of the total number of deaths.

A ratio is a value obtained by dividing one quantity by another, for example, the proportion of men to women in a sample.

In a population, the distribution of the ages may be haphazard or it may follow a normal pattern. The difference also lies in the sex. The population pyramid gives us an opportunity to view both the age as well as the gender differences within that population represented as a single figure. This helps us to better appreciate the differences.

Evidence-based medicine is the integration of the best research evidence with clinical expertise and patient values. It’s a way to use the literature to help you make clinical decisions in a systemic fashion [Sackett DL, Rosenberg WM, Gray JA, Haynes RB, Richardson WS. Evidence based medicine: what it is and what it isn´t. Br Med J 1996;312:71-72]. EBM is the application of the critical thinking aspects of Epidemiology to the process of making clinical decisions. What is “best research evidence”? It is clinically relevant research, often from the basic sciences but typically from medical literature. What is “clinical expertise”? It is the ability to use your clinical skills and past experience to rapidly identify each patient´s unique health state and diagnosis, individual risks and benefits of potential intervention, and their personal values and expectations.

What is “best research evidence”? It is clinically relevant research, often from the basic sciences but typically from medical literature. What is “clinical expertise”? It is the ability to use your clinical skills and past experience to rapidly identify each patient´s unique health state and diagnosis, individual risks and benefits of potential intervention, and their personal values and expectations. What are “patient values”? It is the unique preferences, concerns, and expectations each patient brings to a clinical encounter and which must be integrated into clinical decisions if they are to serve the patient.

EBM  has been around since post-revolutionary Paris. But recent interest has been spurred by 4 realizations:

One can actually practice EBM by converting the need for information (about prevention, diagnosis, prognosis, therapy, causation, etc.) into an answerable question; by finding the best evidence with which to answer that question; by critically appraising that evidence for its validity, impact, and applicability; by assessing the discovered evidence for its epidemiological rigor, retaining only the best; by integrating the evidence with your clinical expertise, circumstances and values, in order to make a clinical decision; by evaluating your effectiveness and efficiency in improving these steps.

Validity means the closeness to the truth or the ‘real world’. Impact means the effect size, or big of a clinical change was measured. Applicability asks how useful the result was to your specific situation?

What to do with this information? Use your well-phrased research question to search for evidence. Apply the Pyramid of Evidence to determine which studies should carry more weight.

Hierarchy of evidence — the evidence pyramid 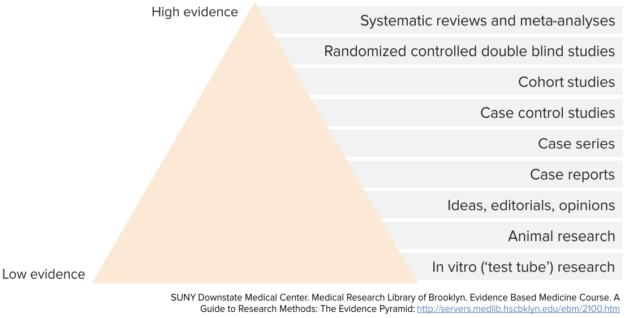 Utilization and Application of Public Health Data in Descriptive Epidemiology via nih.gov